WBW News & Action: How You Become A Peace Activist

Peacestock: The 18th Annual Gathering for Peace: #Peacestock2020 — Theme: Where’s the Truth? A Free, Online Zooming Peace Gathering with Veterans For Peace on Saturday, July 18th from 1pm to 4pm CDT (GMT-5) featuring Norman Solomon and Andrew Bacevich, as well as David Swanson and other peace activists, along with inspiring music by Bill McGrath. Sign up here.

Strengthening Solidarity between Social Movements in Venezuela and the United States: A Virtual Meeting on Thursday, July 16, at 2 p.m. ET (GMT-4). Representatives of social movements in Venezuela and the United States will discuss current U.S. and allied interventions against Venezuela and concrete ways we can build greater solidarity to end U.S. imperialism. The four Embassy Protection Collective members who were arrested inside the Venezuelan Embassy in Washington D.C. last year will also speak on the call. The meeting will be conducted in English and Spanish with simultaneous translation. Sign up here.

War and Nuclear Weapons: Films and Discussions: Join us for this series of discussions of films! We recommend that you view each film ahead of time. Then you can join us for the live (virtual) discussions. Learn more here. 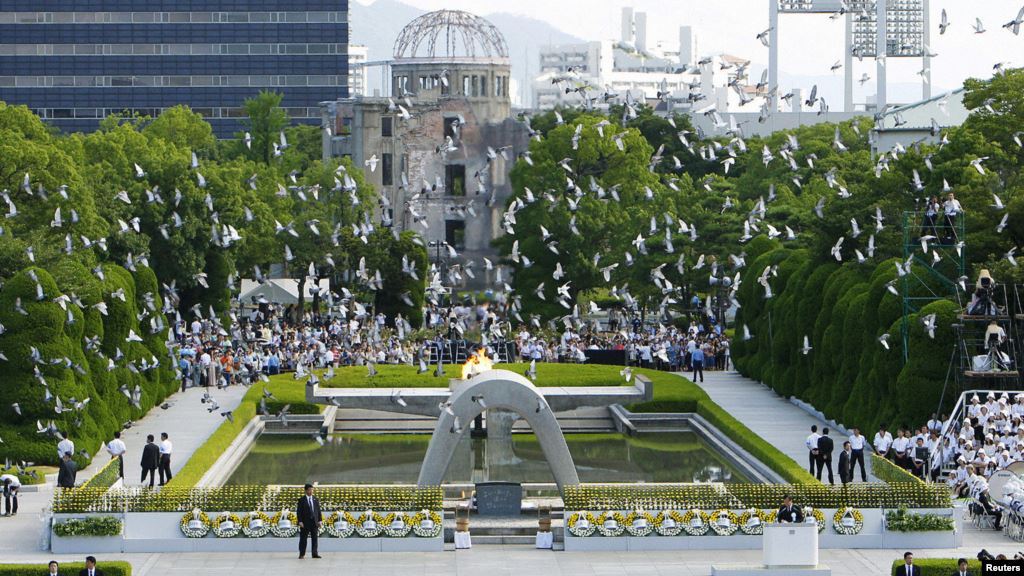 Hibakusha Remembrance Webinar: On Thursday August 6th at noon Pacific Daylight Time: attend, and invite your friends to attend, an online presentation by Dr. Mary-Wynne Ashford, Dr. Jonathan Down, and youth activist Magritte Gordaneer. In the hour-long session, with time for Q&A, these experts will address the bombings, the public health impact of nuclear war, the proliferation of nuclear weapons, the state of international law and other matters to help us all make meaningful the vow: “Never Again.” RSVP. 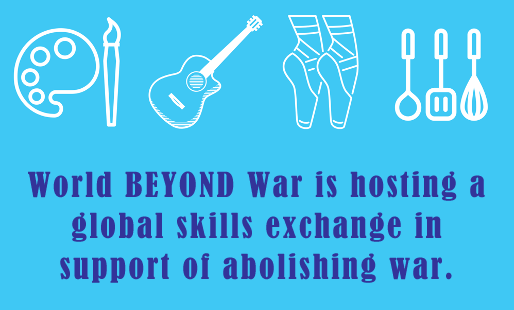 We received an incredible response to our call for talent for the Global Skills Exchange which is officially set to launch next Monday, July 20th! We have some great donations, so keep an eye out for an upcoming email with details about how you can learn how to play the piano or saxophone, transform your life by working with a life coach, learn traditional German cooking, receive multiple therapeutic sessions, learn to knit, attend a virtual poetry event, learn to paint, become conversational in Kichwa, dance, take part in a War Tax Resistance 101 workshop, or learn the five elements as understood in traditional Chinese medicine . . . among many other incredible and fun opportunities that have been so generously donated—all of this while supporting WBW’s efforts to abolish war! 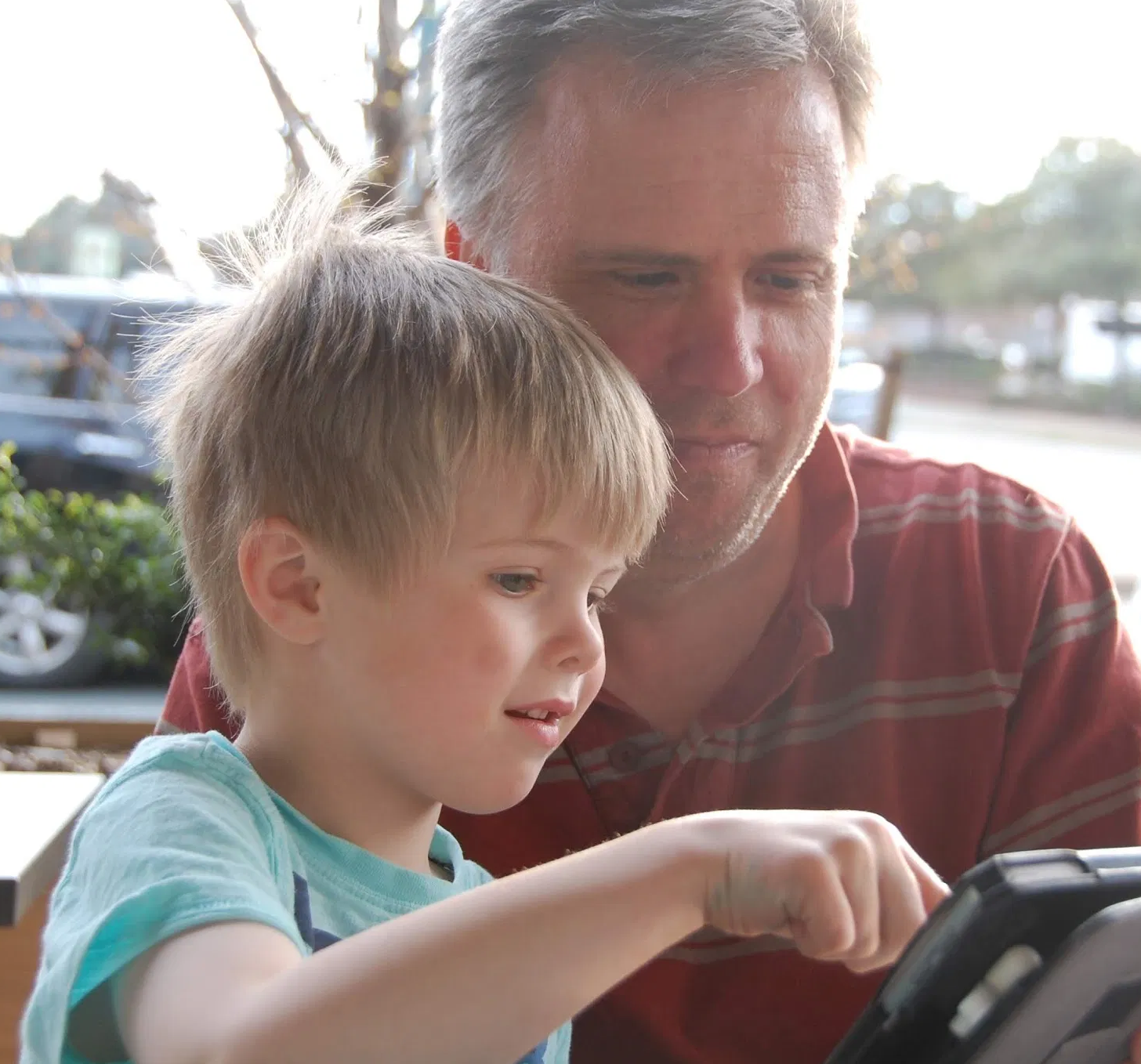 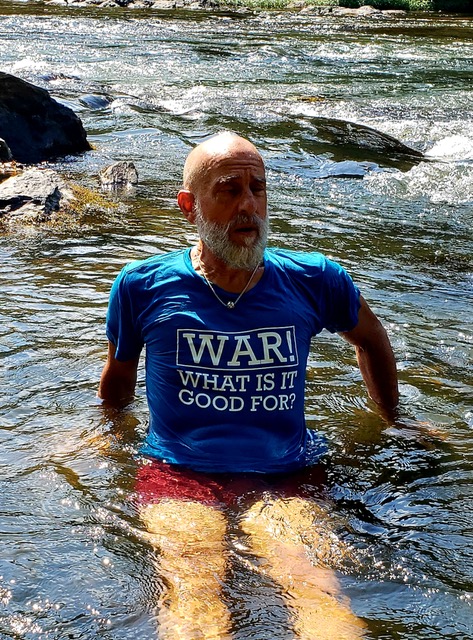 Find a public space that you care about, that’s beautiful or important to you, a shrine, a site of conscience, a place of engagement or of contemplation. Take your photo there with a message against war or for peace. Feel free to make use of this gear or to make your own. Post your photos to social media with the hashtag #worldbeyondwar or email them to us.

Find upcoming events on the events list and map here. Most of them are now online events that can be participated in from anywhere on earth. 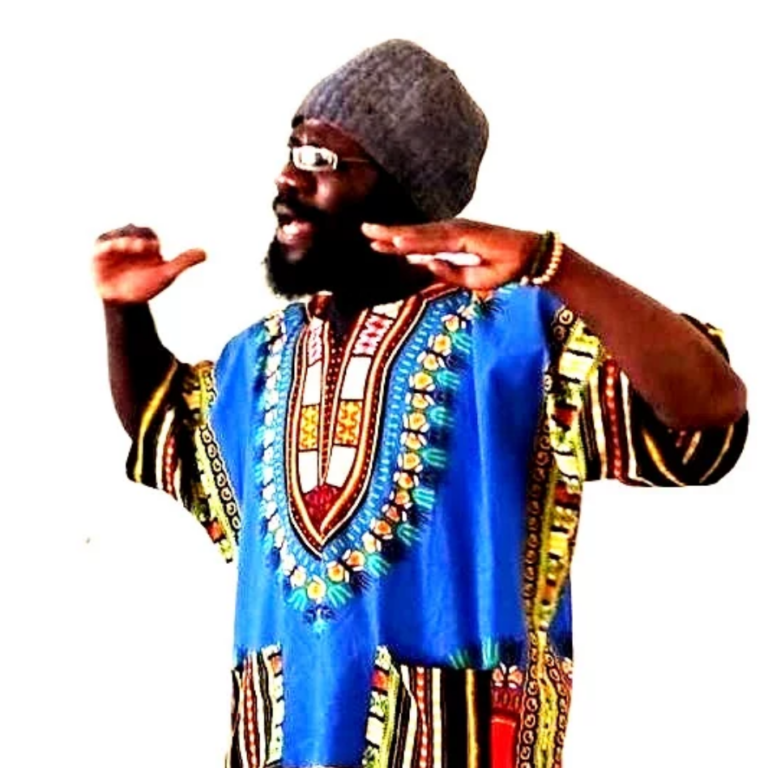 The #NoWar2020 Conference Was Held Online and You Can Watch the Videos.

Preventing Violence & Virus: civilian protection in South Sudan and beyond

An Open Letter By Setsuko Thurlow

Legislation in Congress Would Require Flying Flag With Pentagon on It

The Vow From Hiroshima Should Be From Everywhere

On An Alternative Global Security System: A View From the Margins

Open Letter: US Navy Base In Northern Marianas Will Harm People And Environment

Talk Nation Radio: Greg Mitchell on the Origins of Myths About Hiroshima and Nagasaki

US News Falsely Reports That North Korea Threatened to Nuke US

Corruption And The Arms Trade

Killer Cop Got Start At Dictator-Training Military Base

The Beginning of the End

Cut The Bloated War Budget: An Open Letter to US Senators

Some People in The Villages Oppose Racism and Violence

Talk Nation Radio: Nina Turner Says Wrap Your Mind Around How Much Is Spent on Military Industrial Complex

WorldBEYONDWar is a global network of volunteers, activists, and allied organizations advocating for the abolition of the very institution of war. Our success is driven by a people-powered movement –
support our work for a culture of peace.