An Open Letter By Setsuko Thurlow 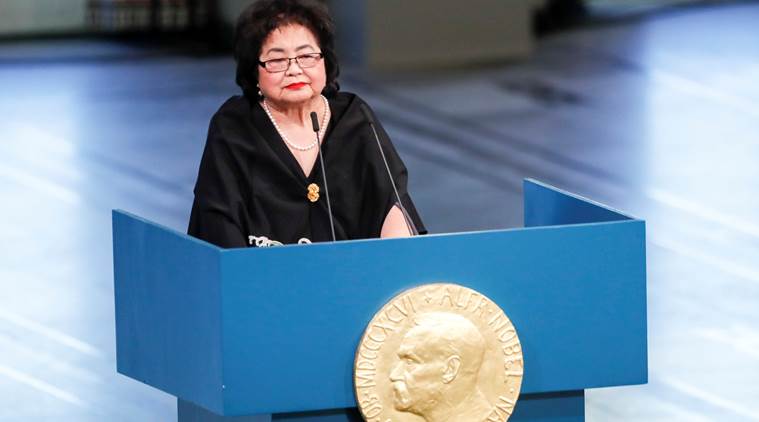 The Right Honourable Justin Trudeau
Prime Minister of Canada
Office of the Prime Minister
80 Wellington Street Ottawa,
ON K1A 0A2

As a Hiroshima survivor, I was honoured to jointly accept the Nobel Peace Prize in 2017 on behalf of the International Campaign to Abolish Nuclear Weapons. With the approaching 75th anniversary of the atomic bombings of Hiroshima and Nagasaki on August 6th and 9th, I have written to all the heads of state across the world, asking them to ratify the UN Treaty on the Prohibition of Nuclear Weapons, and I ask the same of our government.

After I married my husband, James Thurlow, and first moved to Canada in 1955, I often wondered what involvement Canada had in the development of the atom bombs that caused, by the end of 1945, the deaths of over 140,000 people in Hiroshima, 70,000 in Nagasaki and horrendous devastation and injuries that I personally witnessed as a thirteen-year old girl. It truly was hell on earth.

I hope you will be able to ask one of your assistants to examine the enclosed document, “Canada and the Atom Bomb” and to report on its contents to you.

The main points of the document are that Canada, the United States and the United Kingdom — as wartime allies during World War II — had not only completely integrated their production of conventional armaments. Canada was also a direct major participant in the Manhattan Project which developed the uranium and plutonium atom bombs dropped on Japan. This direct involvement operated at the highest Canadian political and governmental organizational level.

For the 75th anniversary of the atomic bombings of Hiroshima and Nagasaki on August 6th and 9th, I am respectfully requesting that you acknowledge Canada’s involvement in and contributions to the two atomic bombings and issue a statement of regret on behalf of the Canadian Government for the immense deaths and suffering caused by the atom bombs that utterly destroyed two Japanese cities.

This direct Canadian Government involvement (described in the attached research document) consisted of the following:

—Mackenzie King’s most powerful minister, C.D. Howe, the Minister of Munitions and Supply, represented Canada on the Combined Policy Committee established to coordinate the joint efforts of the United States, the United Kingdom and Canada to develop the atom bomb.

—C.J. Mackenzie, President of the National Research Council of Canada, represented Canada on a technical subcommittee set up by the Combined Policy Committee to coordinate the work of scientists working on Canadian projects with their colleagues in the United States.

—The National Research Council of Canada designed and built nuclear reactors at its Montreal Laboratory and at Chalk River, Ontario, beginning in 1942 and 1944, and forwarded their scientific discoveries to the Manhattan Project.

—Eldorado Gold Mines Limited began supplying tons of uranium ore from its mine on Great Bear Lake in the Northwest Territories to British scientists as well as to American physicists investigating nuclear fission at Columbia University in New York in October of 1939.

—When Enrico Fermi succeeded in creating the world’s first self-sustaining nuclear chain reaction at the University of Chicago on December 2, 1942, he used Canadian uranium from Eldorado.

—Eldorado signed exclusive contracts with the Manhattan Project in July and December of 1942 for 350 tons of uranium ore and later an additional 500 tons.

—The Canadian Government nationalized Eldorado Mining and Refining Limited in January of 1944 and converted the company into a Crown Corporation to secure Canadian uranium for the Manhattan Project. C.D. Howe stated that “government action in taking over the Eldorado Mining and Smelting Company was part of the atomic [bomb] development program.”

—Eldorado’s refinery in Port Hope, Ontario, was the only refinery in North America capable of refining the uranium ore from the Belgian Congo, the bulk of which (along with Canadian uranium) was used in the manufacture of the Hiroshima and Nagasaki atom bombs.

—On the advice of C.D. Howe, The Consolidated Mining and Smelting Company in Trail, B.C. signed contracts with the Manhattan Project in November of 1942 to produce heavy water for nuclear reactors to produce plutonium.

—As General Leslie Groves, the military head of the Manhattan Project, wrote in his history Now It Can Be Told, “there were about a dozen Canadian scientists in the Project.”

When Prime Minister Mackenzie King was informed on August 6, 1945 that the atom bomb had been dropped on Hiroshima, he wrote in his diary “We now see what might have come to the British race had German scientists won the race [to develop the atom bomb]. It is fortunate that the use of the bomb should have been upon the Japanese rather than upon the white races of Europe.”

In August of 1998, a delegation from Deline, N.W.T., representing Dene hunters and trappers employed by Eldorado to carry the sacks of radioactive uranium ore on their backs for transport to the Eldorado refinery in Port Hope travelled to Hiroshima and expressed their regret for their unwitting role in the creation of the atom bomb. Many Dene had themselves died of cancer as a result of their exposure to uranium ore, leaving Deline a village of widows.

Surely, the Canadian Government should make its own acknowledgement of Canada’s contribution to the creation of the atom bombs that destroyed Hiroshima and Nagasaki. Canadians have a right to know how our government participated in the Manhattan Project that developed the world’s first nuclear weapons.

Since 1988, when Prime Minister Brian Mulroney formally apologized in the House of Commons for the internment of Japanese-Canadians during the Second World War, the Canadian Government has acknowledged and apologized for a dozen historical wrongs. These included apologies to the First Nations for the Canadian residential school system that separated young children from their families and sought to deprive them of their languages and culture.

Prime Minister Mulroney apologized for the internment of Italians as “enemy aliens” during World War II. Prime Minister Stephen Harper apologized in the House for the Chinese head tax imposed on Chinese immigrants between 1885 and 1923.

You yourself have acknowledged and apologized in the House for the Komagata Maru incident in which a shipload of immigrants from India were prohibited from landing in Vancouver in 1914. Y

ou also apologized in the House for Prime Minister Mackenzie King’s decision in 1939 to reject an asylum request from over 900 German Jews fleeing the Nazis on board the ship St. Louis, 254 of whom died in the Holocaust when they were forced to return to Germany.

You apologized once again in the House for past state-sanctioned discrimination against lesbian, gay, bisexual, transgender, queer and two-spirited people in Canada.

Eldorado erected a cement marker at the site of its Port Radium mine that read in capital letters, “This mine was reopened in 1942 to supply uranium for the Manhattan Project (the development of the atomic bomb).” But this awareness by Canadians of our country’s direct participation in the atomic bombings of Hiroshima and Nagasaki has all but disappeared from our collective consciousness.

Your father, Prime Minister Pierre Trudeau, courageously brought about the withdrawal of American nuclear weapons stationed in Canada. I was present at the UN General Assembly’s First Special Session on Disarmament on May 26, 1978 when, in a fresh approach to disarmament, he advocated a “strategy of suffocation” as a means of halting and reversing the nuclear arms race between the United States and the Soviet Union.

“We are thus not only the first country in the world with the capacity to produce nuclear weapons that chose not to do so,” he stated, “we are also the first nuclear-armed country to have chosen to divest itself of nuclear arms.” I was profoundly impressed and thrilled by his speech to the UN Disarmament Session, so hopeful his courageous initiative would lead to a curbing of nuclear arms.

As the United States and Russia announce ever more dangerous nuclear weapons delivery systems and the modernization of their nuclear forces — and the U.S. contemplates resuming nuclear tests — new voices for nuclear disarmament are urgently needed.

You affirmed that Canada is back in international diplomacy. The approaching 75th anniversary of the atomic bombings of Hiroshima and Nagasaki on August 6th and 9th would be the appropriate moment to acknowledge Canada’s critical role in the creation of nuclear weapons, express a statement of regret for the deaths and suffering they caused in Hiroshima and Nagasaki, as well as announce that Canada will ratify the UN Treaty on the Prohibition of Nuclear Weapons.