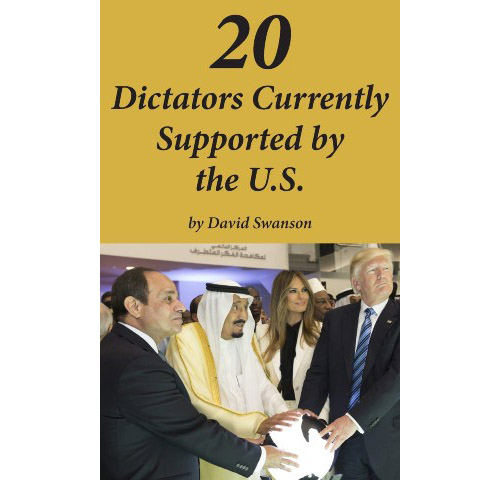 What nations say they stand for and what the evidence suggests they stand for can be – and frequently are – two entirely different things. This highly thought-provoking book puts the world’s most powerful nation in the spotlight and compares the US government’s stated aims with its actual behaviour. The US government projects an image of itself as the global guardian of freedom and democracy; as ever watchful and as prepared, reluctantly, to intervene in the politics of other nations if, and only if, freedom and democracy are under threat. However, in contrast to opposing tyranny in all its forms, the author notes how, in reality, the US government actually funds, arms and trains a wide range of oppressive governments, including dictatorships, if such support is regarded as being in US interests, irrespective of the track records (with respect to democracy and human rights) of the governments themselves.

In the introductory sections, David Swanson considers the wide range of oppressive governments backed by the US and then specifically focusses on dictatorships, since they are the regimes that the US government regularly claims to oppose. He shows how the majority of the world’s ‘unfree’ states (as defined by Rich Whitney [2017] who, in turn bases his approach on the taxonomy provided by ‘Freedom House’, an organisation funded by the US government – ‘free’, ‘partly free’ and ‘unfree’) are supported militarily by the US. He shows also that, contrary to the contention that US military intervention is always on the side of ‘democracy’, the US commonly sells weapons to both sides involved in numerous conflicts around the world. The author both highlights the longevity of this approach: that it is in no way merely to be viewed as a feature of the Trump presidency and contends that the US position of support for oppressive governments follows from the powerful alliance between the US government and US arms producers (the so-called ‘military industrial complex’).

In the following sections, Swanson looks at the great majority of the world’s current dictatorships and shows how they are supported by the US, particularly militarily. He does so by providing twenty current case-studies of dictatorships from around the world, all of whom are backed by the US. We argue that, in so doing, the author provides compelling evidence to refute the view that the US stands in opposition to dictators and the nations they control. The author notes the value of providing corroboratory evidence in the form of lists. It is always very difficult to shift opinion from its established position. A weight of evidence is usually required, especially when the strength of vested interests is extremely high.

In the concluding sections, the author highlights the US government’s highly unconventional behaviour in arming and training overseas militaries. He provides strong statistical evidence for his claim that the US is, by far, the leading international supplier of weapons, responsible for widespread war-related deaths across the globe and the operator of 95% of the world’s military bases located outside their controlling nation.

The author discusses how the so-called ‘Arab Spring’ of 2011 highlighted the contradictory stance of US; it publicly claimed to support the forces pushing for increased democracy but, in reality, its actions had provided important props for the regimes led by the dictators attacked by the protest movements. He develops the line of argument in a highly convincing manner by pointing to the fact that the US has a track record of supporting dictatorships for long periods – most often militarily – and then turning against them once it feels its interests have changed. He points to US support of Saddam Hussein, Noriega and Assad by way of examples and goes on to provide numerous other instances, such as Rafael Trujillo, Francisco Franco, Francoise Duvalier, Jean-Claude Duvalier, Anastasio Somoza Debayle, Fulgencio Batista, and the Shah of Iran.

We argue that Swanson hits the nail on the head when he notes:

‘If U.S. support for dictators seems to be at odds with U.S. rhetoric about spreading democracy, part of the explanation for that may lie in the use of “democracy” as a code word for “our side” regardless of any connection to actual democracy or representative government or respect for human rights’ (p.88).

He then argues that if the enemy is not actually,

‘tyranny but rather the Soviet Union or Communism or Terrorism or Islam or Socialism or China or Iran or Russia, and if anything done in the name of defeating the enemy is labelled “pro-democracy,” then plenty of so-called democracy spreading can involve supporting dictatorships and all kinds of other equally oppressive governments’ (p.88).

In his conclusion to this part of the work, the author also stresses the importance of finance, again backed up by numerous examples, in particular, the significant extent of foreign funding of the think tanks which are highly influential on the shaping of US policy.

The final section of the book deals with the pressing and challenging issue of how US support for dictatorships might be ended. Swanson points to ‘The Stop Arming Human Rights Abusers Act, H.R. 5880, 140’, introduced by Congresswoman Ilhan Omar. Swanson notes that if the bill became law it would prevent the US government from providing a wide range of support to the world’s most oppressive governments. It is hard to disagree with the sentiment expressed by author at the end of his book:

‘The world desperately needs to take control of its governments away from tyrants and executioners. The United States desperately needs to shift its own priorities from out-of-control militarism and weapons dealing to peaceful enterprises. Such a move would be superior morally, environmentally, economically, and in terms of the impact on prospects for human survival’ (p.91).

The author produces a highly convincing falsification of the argument that the US always fights on the side of democracy, arguing instead that whether a state (or leader) is viewed as pro-US or anti-US is the key question (a viewpoint that can, and frequently does, change). The nature of the foreign government itself is not the driver of intervention.

As abroad, so at home

Swanson thus highlights the deeply contradictory approach to foreign policy and looking deeper, we argue that contrasts are equally apparent in domestic policy. According to popular (American) opinion, freedom is the foundation on which the USA is built. But in the application of this supposedly fundamental principle the American government is worryingly selective – in domestic as well as foreign policy. American citizens’ First Amendment freedom of speech and peaceful assembly have in many cases been ignored by their own government when inconvenient to the latter’s interests.

Rarely has this been more apparent than in the response to ongoing Black Lives Matter protests following the murder of George Floyd. Despite clear First Amendment protection, many peaceful protests have been repressed by force. One June 1st incident is emblematic, in which police used tear gas, rubber bullets and flash-bang grenades to clear Lafayette Square of peaceful protestors to allow President Trump a photo-op outside St John’s church (Parker et al 2020). Meanwhile in a White House speech, the president proclaimed himself an ‘ally of all peaceful protesters’ – an ally, it seems, who condones the use of entirely non-peaceful methods to shut down free speech.

Interestingly, similar repression of protest has been unequivocally condemned when another country is the perpetrator. In a May 2020 tweet, Trump urged the Iranian government not to use violence against protestors and to ‘let reporters roam free’. Such a principled defence of the importance of a free press has not, however, led the president to acknowledge or condemn the numerous police attacks on journalists covering the Black Lives Matter protests in the USA (according to U.S Press Freedom Tracker, as of June 15, physical attacks on journalists by police officers number at 57). The root of this inconsistency is not difficult to explain.

Nor, unfortunately, is the disregard for First Amendment freedoms exclusive to the tumultuous Trump presidency, or even to those of Republicans. The Obama administration, for example, saw the 2016 Standing Rock protests against the construction of the Dakota Access Pipeline on Native American land – to which police responded with tear gas, concussion grenades and water cannons in freezing temperatures. President Obama failed to condemn this rampant police violence against peaceful protestors (Colson 2016), a clear case of free speech being repressed by force.

Whilst this current climate of repression is extreme, it is not entirely unprecedented. The US government’s selective approach to the importance of freedom is apparent in its treatment of its own citizens, especially in the realm of protest (Price et al 2020). Ultimately, constitutional rights mean little in practice if they are ignored or outright violated by the government which is supposed to uphold them, and instead decides to enact policy which flies in the face of democracy.

At the beginning of the work the author notes,

‘The purpose of this short book is to make people aware that U.S. militarism supports dictatorships, toward the end of opening up minds to the possibility of questioning militarism’ (p.11).

We argue that he is surely successful in achieving this goal. Importantly, he does so whilst highlighting the deep contradictions involved in US foreign policy; contradictions which we argue above are also apparent in domestic policy. US policy is thus ‘consistently inconsistent’. It is presented as being fundamentally based upon the defence of freedom and democracy whereas, in practice, it is founded upon following the interests of the US government and the powerful pressure groups behind the US establishment.

We believe that Swanson’s book makes a significant contribution to the debate; he backs up all his arguments with highly persuasive evidence; evidence that we argue should be enough to convince the open-minded reader of the validity of his analysis. We heartily recommend this work to all those interested in understanding the driving forces that lie behind the conduct of US foreign policy.