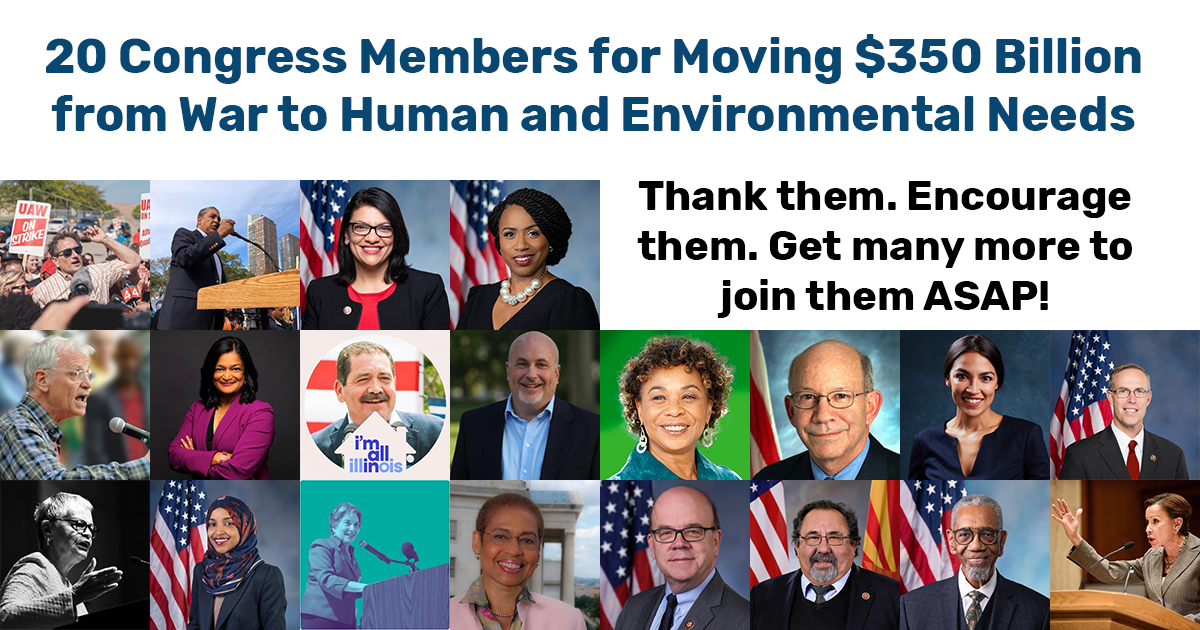 The U.S. Congress has 100 Senators and 435 House Members. Out of the full 535, there are 20 thus far who have made themselves sponsor or cosponsor of a resolution to do what is most badly needed, move major amounts of money out of wars and war preparations and into human and environmental needs.

There are members of both houses who have arranged for there to be votes in the coming weeks on moving a mere 10% of the Pentagon budget to useful things. One way in which we can help them grasp how powerfully we demand yes votes on this is to start celebrating the 20 who have put a more serious proposal on the table. These are the 20 to thank and support and further encourage:

Here’s what else you can do (if you’re not from the U.S. share this with people who are):

1) Email your Representative and Senators.

3) Phone the U.S. Capitol at (202) 224-3121 and ask to speak with your Representative and Senators. You just have to know your own address and that you want them to vote to move money out of the military. If you have more time, phone the local offices and ask for a meeting!

The U.S. government is expected to spend, in its discretionary budget in 2021, $740 billion on the military and $660 billion on absolutely everything else: environmental protections, energy, education, transportation, diplomacy, housing, agriculture, science, disease pandemics, parks, foreign (non-weapons) aid, etc., etc.

Moving $74 billion (10% of the Pentagon budget) would result in $666 billion on militarism and $734 billion on everything else.

Moving $350 billion would result in $390 billion on militarism and $1,010 billion on everything else.

Where would the money come from? According to Rep. Lee’s resolution:

Where would the money go?

The priorities of the U.S. government have been wildly out of touch with both morality and public opinion for decades, and have been moving in the wrong direction even as awareness of the crises facing us has inched upward. It would cost about $30 billion per year, according to UN figures, to end starvation on earth, and about $11 billion to provide the world with clean drinking water. Less than $70 billion per year would wipe out poverty in the United States. Spent wisely, $350 billion could transform the United States and the world, and certainly save even more lives than are spared by taking it away from the military.

Whatever funding is needed to aid anyone in the transition from military to non-military employment will be a small fraction of the whole.