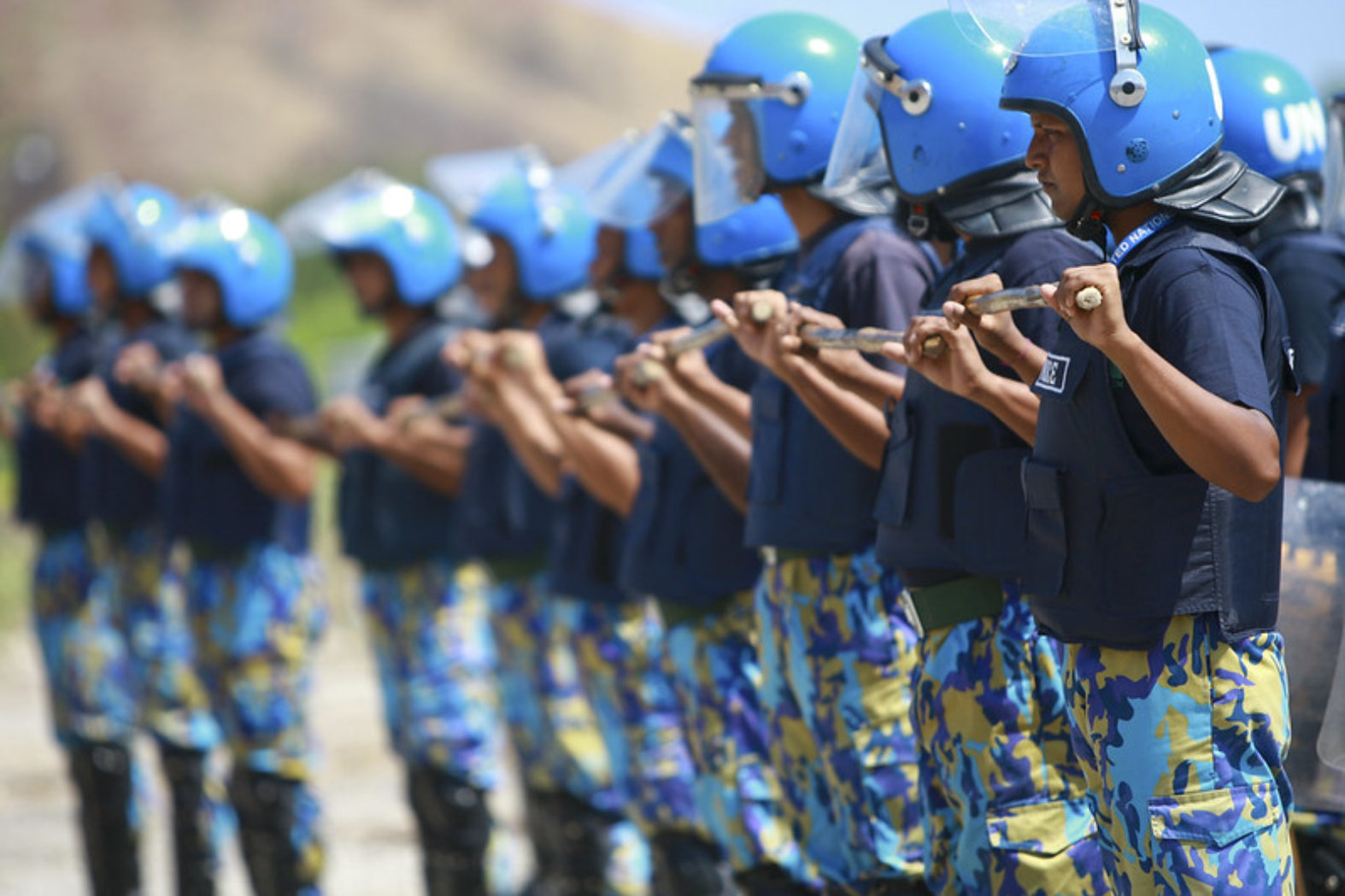 Much of the existing research on UN peacekeeping focuses on top-down peace processes like political agreements or institutional changes. These processes alone cannot measure the internalization of democratic norms or cultural shifts that make the return to war unimaginable. To measure such “bottom-up” peacebuilding effects of UN peacekeeping, the authors focus on an essential component of civic engagement—nonviolent political contention—and ask, “do peacekeeping missions facilitate nonviolent political contention in post-civil war countries?”

To answer this question, they developed a novel dataset that includes 70 countries emerging from civil war between 1990 and 2011 and tests for the number of nonviolent protests those countries experienced. As a conservative measure, the dataset excludes instances where protests led to riots and spontaneous violence. This dataset also includes variables like whether or not the country hosted a UN peacekeeping operation, the number of peacekeepers, and a civil society score from the peacekeepers’ country of origin. This civil society score is sourced from the Varieties of Democracy’s index on civil society participatory environment. This index looks at how involved civil society organizations (like interest groups, labor unions, or advocacy groups, etc.) are in public life. It includes questions about, for instance, whether they are consulted by policy makers or how many people are involved in civil society.

The results show that post-civil war countries with UN peacekeeping operations have more nonviolent protests than countries without peacekeepers. The size of the mission does not seem to matter. The civil society score of the country-of-origin for peacekeepers matters only for UN police (UNPOL) but not for other types of peacekeepers. To put that into numbers,

To explain what these results mean in the context of UN peacekeeping and “bottom-up” peacebuilding, the authors develop a theoretical orientation that sees nonviolent protest as a key marker for the wide internalization of democratic norms. That these protests remain nonviolent is also important, especially in post-civil war countries where the use of violence as political expression and as a means of attaining political goals is normalized. In addition, new political institutions in these countries often fail, so a country’s ability to deal with those challenges nonviolently is key to maintaining peace. The authors posit that UN peacekeepers, particularly UN police (UNPOL), provide security and that their presence promotes “norms of nonviolent political participation.” Further, if post-civil war countries are able to support nonviolent protests, then both its citizenry and government have genuinely internalized democratic norms.

The authors conclude with a short review of cases where UN missions in post-civil war countries contributed to bottom-up peacebuilding and the diffusion of democratic norms. In Namibia, the United Nations Transition Assistance Group would surround and protect civilians during public meetings and show impartiality in crowd control during protests. The same took place in Liberia where the United Nations Mission in Liberia would monitor peaceful demonstrations and intervene to break up violence, including between national police and protesters, during the 2009 elections. This act, protecting the right to protest and ensuring that it happens nonviolently, diffuses norms on nonviolent political participation that are crucial for positive peace in post-civil war countries. The authors end with a note of concern on the shifting burden of UN peacekeeping away from wealthier countries with stronger civil societies to poorer countries with weaker civil societies. They call on policy makers who design UN peacekeeping missions to be mindful to recruit more personnel from countries with stronger civil societies.

This article’s novel focus on the role of police in peacebuilding offers a new way to think about UN peacekeeping, especially as a bottom-up approach through an institution that otherwise focuses top-down or state-centric approaches. Part of peacebuilding, especially for post-civil war countries, is to rebuild the social contract between the government and its people that was torn apart during civil war. A peace agreement can formally end hostilities, but much more work is needed to make people genuinely believe that they can participate in public life and effect change. Protests are a fundamental tool of political participation—they serve to bring awareness to a problem, mobilize political coalitions, and win public support. For a government to respond with violence is to chip away at the social contract that binds society together.

We cannot pretend that this analysis, which focuses on aspects of protest and policing in foreign countries, is disconnected from our desire to constructively address the current moment in the U.S. How does policing look in a society that is committed to everyone’s security? It is a necessary conversation for the Digest’s editorial team and for others reckoning with the police killings of George Floyd, Breonna Taylor, and countless other Black Americans. If the essential purpose of police is to provide security, then it must be asked: Whose security are the police providing? How do the police go about providing that security? For far too long in the United States, policing has been used as a tool of oppression against Black, Indigenous, and other people of color (BIPOC). This history of policing is paired with a deeply entrenched culture of white supremacy, evident in the racial bias found throughout the law enforcement and criminal justice system. We are also bearing witness to the extent of police brutality against nonviolent protesters—which, equally ironic and tragic, provides more evidence for the need to fundamentally change what policing means in the United States.

Much of the conversation on policing in the United States has focused on the militarization of the police, from the adoption of a “warrior” mentality (as opposed to a “guardian” mentality of policing—see Continued Reading) to the transfer of military equipment to police departments via the 1033 program of the Defense Authorization Act. As a society, we are beginning to envision what the alternatives to a militarized police force might look like. There is incredible evidence on the efficacy of non-militarized and unarmed approaches to security featured in the Peace Science Digest. For instance, in Assessing Armed and Unarmed Approaches to Peacekeeping, research reveals that “unarmed civilian peacekeeping (UCP) has successfully engaged in the tasks traditionally associated with peacekeeping, demonstrating that peacekeeping does not require military personnel or the presence of weapons to carry out its violence prevention and civilian protection functions.” Although they are mostly armed, UN police, especially with their embrace of community-oriented policing, still represent a less militarized approach to security in comparison to other UN peacekeeping forces, especially those with more aggressive mandates to engage in combat missions. But, as is becoming increasingly evident in the U.S. (even with its vibrant civil society and democratic norms), armed police can still pose a fundamental threat to large segments of the citizenry. At what point do we acknowledge that armed police, rather than upholding the social contract, are largely agents of its disintegration? This acknowledgement must ultimately prod us even further in the direction of demilitarization to the embrace of fully unarmed approaches to security—approaches that do not exact one person’s security at the expense of another’s. [KC]

Sullivan, H. (2020, June 17). Why do protests turn violent? Blame state-society relations (and not provocateurs). Political Violence at a Glance. Retrieved June 22, 2020, from https://politicalviolenceataglance.org/2020/06/17/why-do-protests-turn-violent-blame-state-society-relations-and-not-provocateurs/

[1] The authors define civil society as “a category [which] includes organized and unorganized citizens, from human rights defenders to nonviolent demonstrators.”