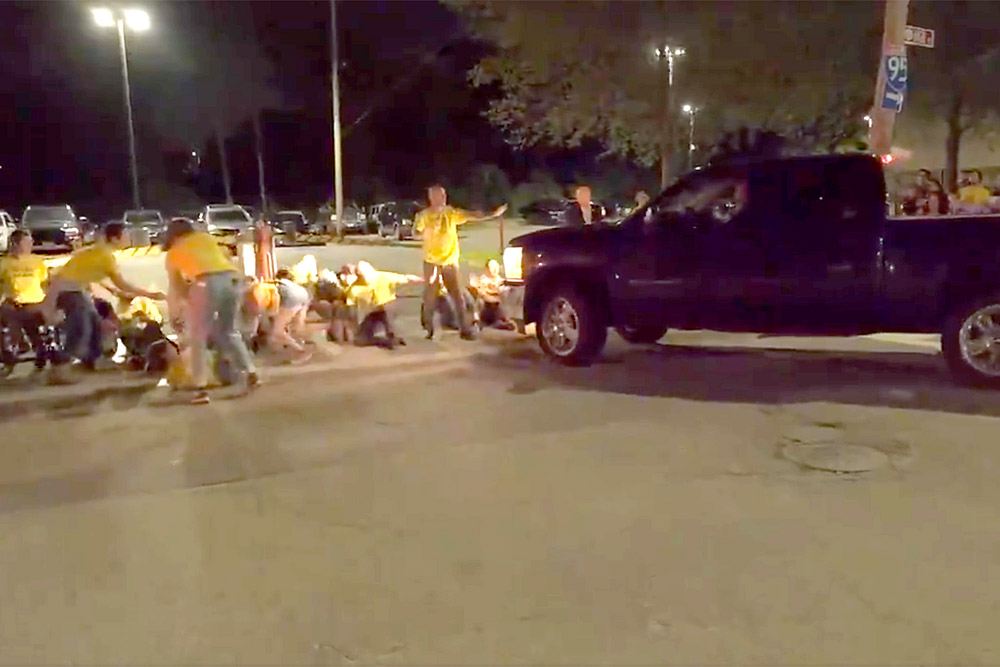 The big black pickup truck plunged into the protesters blocking the parking lot and I cringed, viscerally, as though I could feel it myself — this merciless crush of steel against flesh.

I was recovering from a bicycle injury when I watched the event on the news last week, as members of the Never Again movement stood their ground to shut down the Wyatt Detention Facility, in Central Falls, R.I. I had fallen a few days earlier; my face hit the sidewalk. I was far too close to my own trauma not to feel a horrified empathy as I watched the video.

And ever since then I’ve been thinking about the paradoxical courage of nonviolent resistance, nonviolent demand for change and the cessation of “legal” wrongs — from Jim Crow to colonial exploitation to the maintenance of concentration camps (in Germany, in the United States). The core paradox of nonviolent protest against such legally sanctioned immoralities is that, if you block a driveway with your body or simply cross a bridge, you’re depending on the humanity of those you confront, who are armed with the weapons they hold or the vehicles they are driving, to keep them from acting on their anger and harming or killing you.

Is this not the essence of courage? You are bringing nothing but yourself, empowered solely by the force of moral compassion — the way the world should be — to a confrontational demand for change. This doesn’t even compute as rational in a win-lose world. You are not setting your cause for justice and fairness aside as you engage the enemy in an armed shootout, with the plan to implement new social rules after you win. You are creating a new reality as you fight for it. Nonviolent protest is a confrontation between parallel universes: love vs. hate. This is, perhaps, the definition of evolution.

And it doesn’t come without pain.

Thus, on the evening of Aug. 14, some 500 Never Again protesters stood outside the Wyatt Detention Facility, a privately owned prison under contract with ICE, which was holding over 100 immigrant detainees, who were being denied needed medical care and enduring other inhumane conditions. Around 9 p.m., there was a shift change at the facility and some of the protesters placed themselves at the entrance to the main parking lot. This was indeed directly confrontational; they wanted to temporarily disrupt prison operations.

A short while later, the employee in the black pickup truck turned into the lot, blaring his horn at the protesters. As they pounded on the hood of his truck he gunned forward into the protesters, two of whom wound up being hospitalized (one man suffering a broken leg and internal bleeding). A short while later, half a dozen officers marched resolutely out of the facility and blasted the crowd with pepper spray, causing three more protesters, including a woman in her 70s, to be hospitalized.

That was it, except for the viral video and the news coverage. Even though the officers and the facility “won,” dispersing the crowd and clearing the parking lot, the driver who impulsively rammed the protesters was placed on administrative leave and shortly thereafter “resigned.”

The Rhode Island ACLU later declared, in a statement, that the facility’s response to the protest was “an attempt to chill the exercise of First Amendment rights by hundreds of peaceful protestors.” It was also “completely unacceptable uses of force.”

Maybe so, but I would add that it is also much, much more than that. The protesters were not standing outside the Wyatt Detention Facility out of some random desire to exercise a First Amendment right, but because of outrage at the facility’s relationship with ICE and the American government’s detention of immigrants. Whether they were acting within a constitutional right or utterly outside of their legal rights was irrelevant. They were claiming, in the moment, the right to interrupt the nation’s establishment of concentration camps and its indefinite detention of primarily Latin American asylum seekers — people fleeing, often with their children, desperate conditions in their native countries, partially caused by U.S. actions over the last six or seven decades.

They were, once again, crossing Edmund Pettus Bridge, walking unarmed into a confrontation with a domestic army of club-wielding police. They were walking with Martin Luther King, with Mahatma Gandhi, with Nelson Mandela.

“Nonviolence is the greatest force at the disposal of mankind,” Gandhi said. “It is mightier than the mightiest weapon of destruction devised by the ingenuity of man.”

With these words in mind, I revisit my painful viewing of the pickup truck confrontation at the private prison. For a moment, as I watched the video and felt the pain being inflicted, I imagined Tiananmen Square — government forces breaking up a nonviolent protest with rifles and tanks, killing hundreds or maybe thousands in their determination to maintain dominance.

“As Jews, we’ve been taught to never let anything like the Holocaust happen again. This crisis isn’t happening just at the border. It’s happening in our communities all around the country.” Thus reads a Never Again Is Now recruitment declaration.

“. . . At our protest in August, a guard at the Wyatt drove his truck through a line of peaceful protesters blocking a parking lot. Shortly after, more guards came out and pepper-sprayed the crowd. These tactics were used to scare us away and make us give up, but instead we’re more determined than ever to shut down these systems of state-sanctioned violence. We need anyone and everyone to throw themselves into the gears of the system. We need our politicians to take drastic action to shut down ICE immediately and ensure safety for people fleeing to the United States. Until they do, we’re going to make it impossible for ICE to do business as usual. We refuse to wait and see what happens next.”

I would add: This is participatory evolution.