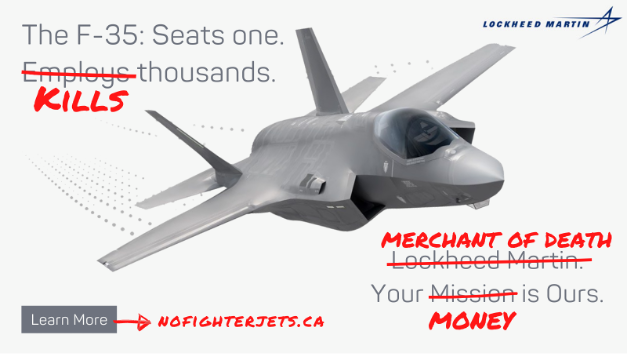 Help us make sure everyone who has seen Lockheed Martin’s ubiquitous ads also sees our fact-checked version by sharing it on twitter and facebook.

For over a year now, Canadians have been battling the coronavirus pandemic physically, financially, and emotionally. Despite this crisis, the Government of Canada is proceeding with plans to buy new war planes. Frustrated with the plan to use taxpayer dollars to fund war, the No New Fighter Jets Coalition recently held a Fast Against Fighter Jets.

To prepare for the fast, the coalition, with the help of World BEYOND War, hosted an inspiring webinar in February about how fasts and hunger strikes can be used for political change. Fasts are time-honoured forms of political resistance and nonviolent protest. Speakers on the webinar included: Kathy Kelly, well-known American peace activist and coordinator of Voices for Creative Nonviolence, who has fasted to stop the war in Yemen; Souheil Benslimane, Coordinator of the Jail Accountability and Information Line (JAIL) hotline, who discussed hunger strikes in prison; Lyn Adamson, co-founder of ClimateFast and national co-Chair of Canadian Voice of Women for Peace, who fasted for climate justice outside of Parliament; and Matthew Behrens, coordinator of Homes not Bombs, who has led many rolling fasts for peace and justice.

From April 10th to April 24, over 100 Canadians from coast to coast participated in the first Fast Against Fighter Jets. People fasted, meditated and prayed and contacted their Member of Parliament to express their opposition to the Government of Canada’s planned purchase of 88 new fighter jets for $19 billion. On April 10th, a beautiful online candlelight vigil was held to support the Canadians were fasting. 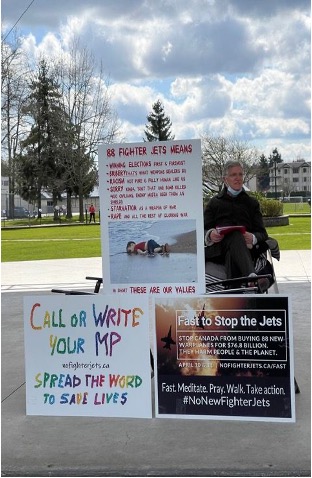 Two committed members, Vanessa Lanteigne who is the national Coordinator of the Canadian Voice of Women for Peace and Dr. Brendan Martin who is a family physician in British Columbia and member of the World BEYOND War Vancouver chapter, fasted for the entire 14 days to convey the urgency of action. Martin fasted with his signs “fighter jets mean war and starvation” in public at his neighbourhood park. In a podcast hosted by World BEYOND War, Lanteigne and Martin detailed how they believed the fast was an important step in honouring those killed by in the past by Canadian warplanes, and raising awareness about the costly procurement diverting resources from human needs.

During the fast, the Coalition also launched an open letter to Pope Francis to pray with activists that the Government of Canada, led by Prime Minister Justin Trudeau – a Catholic himself –  will not buy new fighter jets and instead will invest in the “care for our common home”. The Pope has made peace a priority for his papacy. Every January 1st, the Pope gives his World Peace statement. In 2015, he released an important encyclical urging action on climate change. In his Easter address this April, the Pope said “The pandemic is still spreading, while the social and economic crisis remains severe, especially for the poor. Nonetheless – and this is scandalous – armed conflicts have not ended and military arsenals are being strengthened.” In Ottawa, Buddhist activists fasted in solidarity. 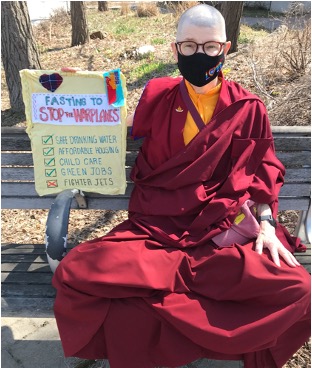 The national fast promoted the message that fighter jets won’t protect Canadians from the biggest threats we are facing: the pandemic, a housing crisis, and catastrophic climate change.

Though the Canadian government claims that $19 billion will be spent on the procurement of these new jets, the No New Fighter Jets Coalition estimates in a recent report that the true lifecycle cost will be closer to $77 billion. The government is currently evaluating bids for Boeing’s Super Hornet, SAAB’s Gripen and Lockheed Martin’s F-35 stealth fighter and has stated it will pick a new fighter jet in 2022.

The No New Fighter Jets Coalition argues that instead of investing in weapons of war, the federal government needs to start investing in a just COVID-19 recovery and a green new deal.

Fighter jets consume excessive fossil fuels. For example, Lockheed Martin’s F-35 releases more carbon emissions into the atmosphere in one long-range flight than a typical automobile does in a year. If Canada purchases these carbon-intensive combat aircraft, it will be impossible for the country to meet its emission reduction targets as required by the Paris Agreement.

In the end, these fighter jets are weapons of war. They have assisted in U.S.-led and NATO airstrikes in Iraq, Serbia, Libya and Syria. These bombing campaigns have left these countries worse off. By purchasing combat aircraft, the Canadian government is affirming our commitment to militarism and war, and negating our reputation as a peacebuilding country. By stopping this purchase, we can begin dismantling Canada’s war economy, and building a care economy that protects people and the planet.

With the fast over, the No Fighters Jet Coalition has launched a parliamentary petition that is sponsored by Green Party Member of Parliament Paul Manly. Canadian peace activists have also re-branded the Lockheed Martin ad and distributed it on social media to raise awareness of how this procurement will enrich the weapons giants. By exposing Lockheed Martin as a “merchant of death”, they hope to raise awareness about the dangers of this purchase, and encourage Canadians to get involved in the movement. Follow the Coalition on social media at @nofighterjets and on the web at nofighterjets.ca

Laine McCrory is a Peace Campaigner with Canadian Voice of Women for Peace and Science for Peace.