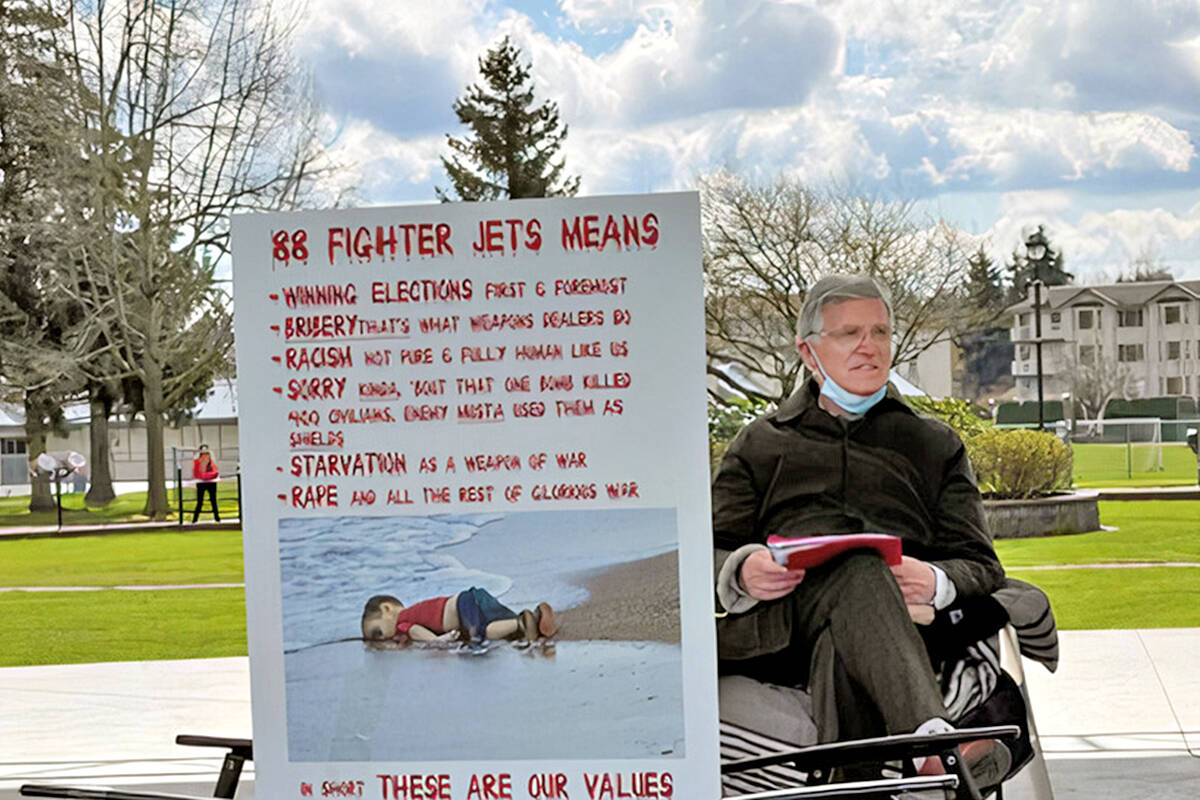 A Langley doctor refuses to give up his battle: Brendan Martin will continue to protest the planned purchase of warplanes by the federal government early next year.

And, he persists with his activism efforts today, with a protest getting underway on 200th Street at 1 p.m.

He is part of a Canada-wide organization – a national “No Fighter Jets Coalition” of peace, justice, and faith groups – lobbying against the federal government’s planned purchase of 88 new fighter jets.

Martin will be accompanied by friends and family from 1 to 3 p.m. on two sections of the major thoroughfare: the first at the pedestrian overpass at 68th Avenue over 200th Street, and the second location opposite Red Robin Restaurant, just north of the Langley Bypass – also on 200 Street.

“It is our collective duty as Canadians to force our MPs to abandon the plan to further militarize Canada and later in November there will be a day of action to tell them so… Justice cries out for your voice,” Martin said when announcing Saturday’s actions.

Martin and the group oppose buying the new fighter jets, saying it is fiscally irresponsible when the federal government is running a $268-billion deficit during the pandemic. The fighter jet money would be better spent on other things, he insisted.

“As with our current and past relationship with First Nations, future generations will look back on today’s Canada with shame and apologies that we helped murder half a million Iraqi children in the 1990s – as admitted by our ally, Madeleine Albright – that we made war on the poverty-stricken people of Afghanistan,” said the Brookswood resident.

He said the actions of the federal government and Canadian military make this country “accomplices” to U.S. government, which has “murdering forces marauding across the globe solely for the benefit of big business.”

Martin accuses Trudeau and his MPs of bribing Canadians with promises of employment from the expected purchase of 88 warplanes in the early months of next year.

“These potential jobs really are Al Capone contracts. He might just as well stamp Canada as ‘Murder Incorporated Junior,” said the doctor.

The money from the purchase of the jets, which he understands will have nuclear missile capacity, is money that – in his view – should be spent on “civil society” instead. It would, Martin argued, create a far greater number of jobs, “jobs in which we could prosper and be proud, jobs that would build up our world for inhabitants instead of destroying our planet.”