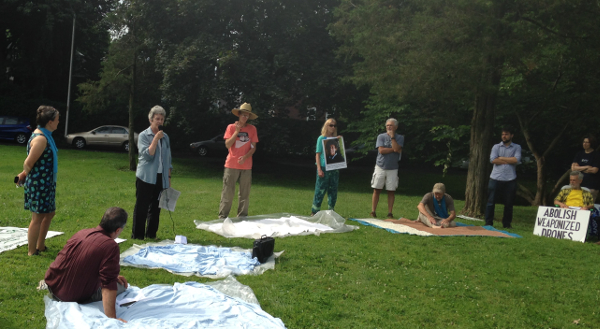 Dr Martin Luther King said: “Those who love peace must learn to organize as effectively as those who love war.”

As biomedical teams around the world organize to find a vaccine for Covid19, peace makers have found their moment to pressure political leadership to find a cure for our addiction to war. This pandemic can be an evolutionary turning point in modern human history. It won’t happen sitting on our collective progressive asses.

National Priorities (www.nationalpriorites.org) studies show we spend 55.2% of our annual discretionary budget on militarism while denying racism and its link to poverty. Our military budget robs Americans, especially African Americans. The banditry can stop with deep cuts in war preparation spending, closing loopholes for tax-evading large corporations, and legislating a financial transaction tax.

These are not new ideas. They are action plans that even my high school students knew decades ago. They can all be achieved but only by organized action.

In 1991, two years after the fall of the iron curtain, senior students at Maine-Endwell HS in upstate New York organized Town Hall meetings in their high school auditorium. Their focus was to discuss how to use the peace dividend expected from the end of the Cold War. Researching for the Town Meeting, they found documentation showing the Pentagon and major arms producers were opposed to economic conversion.

The evening of the Town Meeting only Link Aviation sent a delegate to discuss the issue. (Martin Marietta, now Lockheed-Martin, & GE the two local war manufactures were no shows) Student naiveté was beginning to crumble like the Berlin Wall. The following day the Binghamton Press and Sun Bulletin ran an editorial: The Children Shall Lead Them. The Washington Post shortly afterwards published a feature article on their editorial page praising M-E students for their call to positive economic conversation.

Of course, the arms maker and the Pentagon had their way. With weapons makers in every one of the 435 United States congressional districts, they do create jobs; they do put bread and butter on the tables of American workers. Ironically, some of those same bright students who pressured the arms makers may have become part of the war addiction system they so strongly wanted to change. War addiction is the American way.

How do we move Congress to recognize disease, not war, is our priority? Congressional offices in Washington and in home districts have been closed to the public. Our democracy, wobbly, and tethering on the brink of fascism, is now on lockdown.

Veterans for Peace of Broome County NY has assembled a team of seasoned scholarly activists to meet in a Zoom conference with Armed Services Committee member, Anthony Brindisi on April 29th with New York Senators Schumer and Gillibrand to follow in coming days.

Other peace and justice groups around the nation can organize electronic sessions with federal representatives now to demand deep cuts in military spending.

Jack Gilroy taught Participation In Government at Maine-Endwell High School, in Endwell, New York for three decades. He is President of Veterans for Peace of Broome County, NY and has served the longest sentence of any member of UpStateDroneAction.org nonviolent resistance team to crimes of the US Air Force 174th Attack Wing at Hancock drone base in Syracuse, NY.