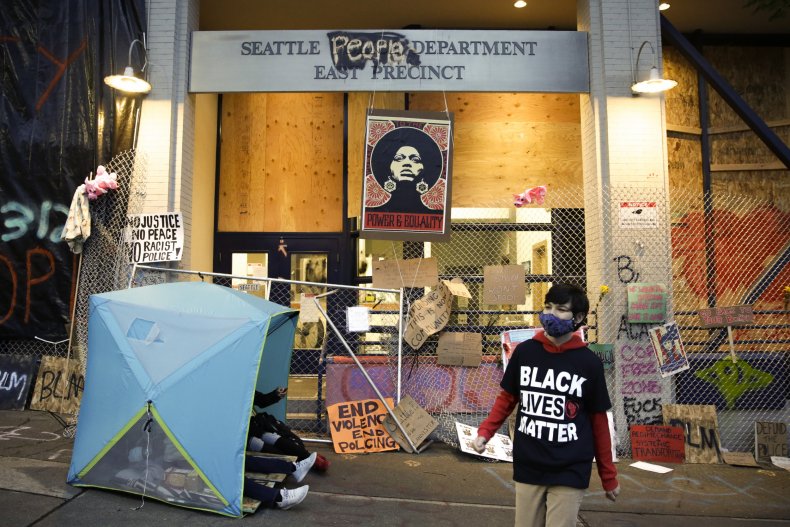 Maybe Seattle’s CHOP (Capitol Hill Occupation Protest) won’t last, but something is changing. Our national groupthink, as maintained with such stalwart certainty over the last half century by centrist politics and the mainstream media, seems to be crumbling before our very eyes.

And as the groupthink crumbles, a larger awareness opens. Progressive thinking is finding its way back into the collective conversation, allowing the nation to begin transcending situation normal — you know, militarized policing keeps us safe, racism is a thing of the past, etc., etc. — and opening up the possibility that we can begin creating a complexly compassionate future.

This small beginning has emerged from the police murder of George Floyd and the global uprising that followed. The media and many political and corporate leaders, instead of uniting to marginalize the protesters, as they have always done in the past (with the help of the police, of course), are sitting there in a stunned semblance of agreement: Yeah, something’s wrong. We’ve got to make changes.

Believe me, I’m not saying the political status quo is radicalized by any means, or that the needed changes are simple and obvious — anything but! Nonetheless . . .

Let’s consider the recent “takeover” of a six-block area in downtown Seattle known as Capitol Hill. The neighborhood was a focal point of the city’s protests and at one point in early June, in the midst of clashes between police and protesters, police abandoned the local precinct. Protesters then declared a small, cordoned-off area to be police-free. Initially known as CHAZ — the Capitol Hill Autonomous Zone — it eventually became CHOP, for Capitol Hill Occupied Protest. And the area maintained a certain organized autonomy — complete with patrolling paramedics and sentinels, along with numerous participants with interesting agendas — for several weeks.

It was also the scene of several shootings, one of which, horrifically, resulted in the death of a 19-year-old young man, Horace Lorenzo Anderson. No suspect was found.

Was the killing a consequence of the fact that CHOP was police-free? No, of course not. Homicides occur when and where they occur, always, except for this instance, in zones that are patrolled by police. And sometimes, of course, the violence is perpetrated by the police themselves. Police defenders and the seething political right, of course, immediately cried out “told ya so!” after the murder, declaring CHOP to have devolved into chaos and mob rule, with no one safe anymore.

The amazing thing is that the Trump right has been left to stew by itself. The president may tweet “Domestic Terrorists have taken over Seattle” and threaten to send in the military. But Seattle’s mayor, Jenny Durkan, tweets back: “Make us all safe. Go back to your bunker.”

And the media has not covered CHOP with the same dismissive, groupthink mentality that has been characteristic of its coverage of . . . oh gosh . . . our 21st century wars, insanely bloated military budgets, innumerable social wrongs. Something is different now. Is that possible? Could it be there’s an awareness — indeed, a complex intelligence — present in this coverage that’s indicative of transformative change?

Maybe I’m making too much of this. But consider, for instance, this Washington Post story, by investigative reporter Meryl Kornfield, in the wake of the CHOP shootings. It was free of the right-wing assumption that the protesters were at fault and continually pointed out their basic peacefulness, noting, for instance, that the shooting victims were quickly taken to the hospital by community paramedics. This was not mob chaos, simply a different sort of social order.

Kornfield interviewed a CHOP tent-resident, who pointed out: “Usually in an active-shooter situation when police are involved, they let the shooter run out of bullets and then they get in there. That did not happen here. As soon as there were shots fired, people got actively involved, and there was a medical team on site immediately. We didn’t need sirens and more guns to get the job done.”

Even CHOP’s real problems were discussed with broad-minded openness. For instance, the resident told her: “I encountered a younger kid who had a gun and wanted to let his friend shoot it off as a celebration. I was telling him this can’t be that type of environment; we’re trying to protest. Actively using guns in any form or fashion is going to bring wants and desires for the cops to come back.”

And then there was a story in the Seattle Times, describing one small aspect of CHOP’s uniqueness. A youth basketball trainer named Dari Arrington, needing an outlet for his anger and despair over George Floyd’s death (and out of work during the pandemic), created a project called Shoot 4 Change, “where he asks people to creatively put a wish for change on a piece of paper, ball it up and shoot into a plastic bucket,” reporter Jayda Evans writes.

Arrington tells participants: “Once you ball up what you wrote down, that represents your heart. And everybody else’s hearts that are crushed in the world because so much chaos is going on. We all have these crushed hearts. But what’s inside our hearts is a beautiful message. A beautiful dream. A beautiful wish or whatever. And I want people to come together in unity to fight for change.”

Arrington told Evans: “The vibe in CHOP is peaceful and energetic. People really speaking out about the Black Lives Matter movement and it makes me feel like I’m in a creative bubble where people are looking to use their voice in a positive light to spread a very powerful message. They’re not willing to give up at all. We’re going to keep doing it until change actually comes about.”

It’s not easy to cover a creative bubble. Anything, good or bad, could happen here. But this is where fragments of the future are simmering. CHOP, apparently, is now undone. It was what it was while it lasted, a cauldron of possibility, which much of the media, fortunately, chose to write about rather than dismiss.

The possibility is still alive.