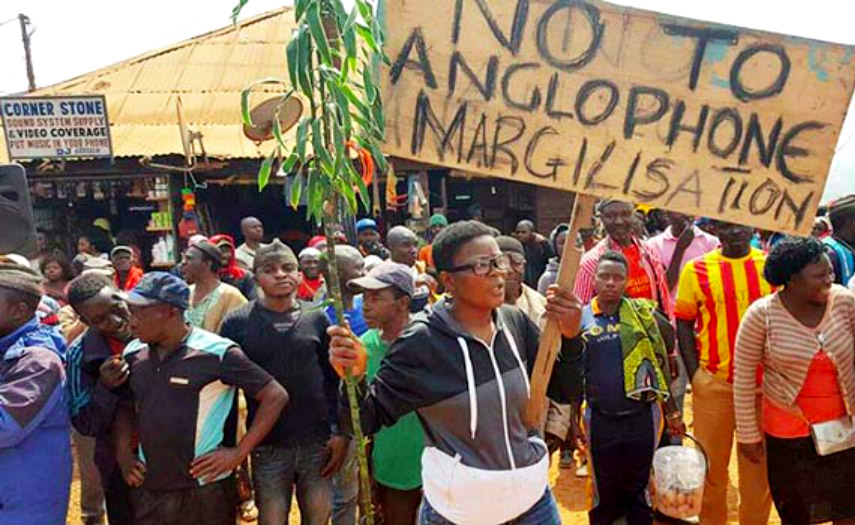 A rupture and a long war between the government of Cameroon and its English-speaking population has been worsening since October 1, 1961, the date of the independence of the Southern Cameroon (Anglophone Cameroon). Violence, destruction, assassinations and horror are now the daily life of the people of Southern Cameroon. The toll of this 60-year civil war today is that there is no toll.

There is insufficient help from the international community, which worries about the risk of generalization in view of the clashes between separatists, the regular army and every other source of political, social and security tension inside this country. Perhaps there would be external assistance if activists and peacebuilders around the world knew more about the history of this conflict.

The State of Cameroon was “created” under German protectorate in 1884, the result of a Berlin conference on the partition of Africa between former colonizing powers. Located in Central Africa, in the heart of the Gulf of Guinea, Cameroon was one of the largest settlements at the end of the 19th century. The city of Buea, located at the foot of Mount Cameroon, was Cameroon’s capital from 1901 to 1909, when the volcanic eruption of this mountain forced the German colonial administrators to move the capital to Yaoundé, the current capital.

Germany was forced by the League of Nations to renounce its overseas territories at the end of World War One. Cameroon was administered by France in its eastern part and England in its western part following the Franco-British condominium on the annexation of the territory in 1916. The Second World War followed by the creation of the United Nations only left Cameroon frozen in time, supervised and administered in the same position and under the same conditions by France and England.

As winds of independence blew on Africa, the independent state of French-speaking eastern Cameroon was born on January 1, 1960, while Anglophone West Cameroon remained a colony administered by England. France and England maintained different systems: local communities were granted certain autonomous powers in British colonies, where the French metropolis practiced the same system of direct rule as in other French colonies.

Western Cameroon under British supervision was made up of two entities: Northern Cameroon (northern zone) and Southern Cameroon (southern zone). Each entity had its representatives who were sitting in the parliament of Lagos in Nigeria, another British colony sharing a border of nearly 1800 km with West Cameroon. Nigeria became independent on October 1, 1960, but Western Cameroon remained under British administration and in the grip of two independent States: Nigeria and Eastern Cameroon. Nigeria was able to initiate its decolonization process through representations and correspondence addressed to the attention of the General Secretary of the United Nations and the Queen of England, but West Cameroon lacked this access. The British administration and the United Nations were willing to bring independence to West Cameroon by attaching it either to Nigeria or to East Cameroon. The UN organized a plebiscite on February 11, 1961. The northern zone (Northern Cameroon) voted to attach to Nigeria, while the southern zone (Southern Cameroon) chose the attachment to eastern Cameroon. The evening of the proclamation of the results of the rallying vote began the long process, still unfinished, of finding national unity within the legacy of a two-speed colonial past.

Reunification or a dupe contract?

Between June and August 1961, the Bamenda conferences met in Foumban and Yaoundé to reunify the two states, combine administrative and operational components, and write a constitution. A celebration of the independence and reunification of the country took place on October 1, 1961 in Tiko, a city in Southern Cameroon. This parade allowed the authorities of eastern Cameroon to arrive with an imposing military apparatus, effectively occupying the whole of Southern Cameroon. 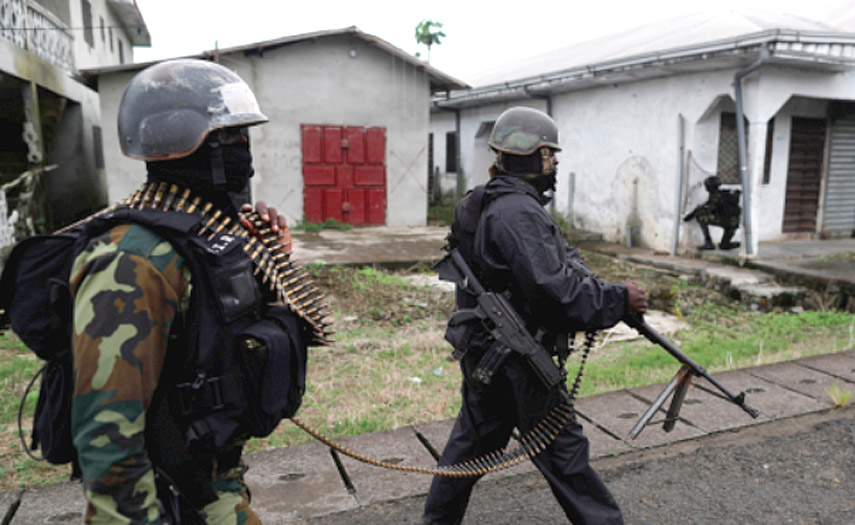 An initially peaceful coexistence quickly deteriorated due to divergent visions and apparent antagonisms between the leaders of the federated states, as well as flagrant inclinations for hegemony and assimilation on the part of the French-speaking leaders. Some Anglophone leaders urged changes to the constitution. A crisis of confidence has resulted in tensions, exclusionary measures, and a lack of unity and national cohesion.

The state attempted to fix its problems by changing in form, becoming United Republic of Cameroon in 1972, then Republic of Cameroon in 1984, always with increasing power and prerogatives to the executive. Concentration of power on a single man corrupted democracy, with no rotation of power, and the resulting economic crises led to impoverishment of populations, corruption, limited autonomy of communities and separatist tendencies between the Cameroon government and the English-speaking minority. 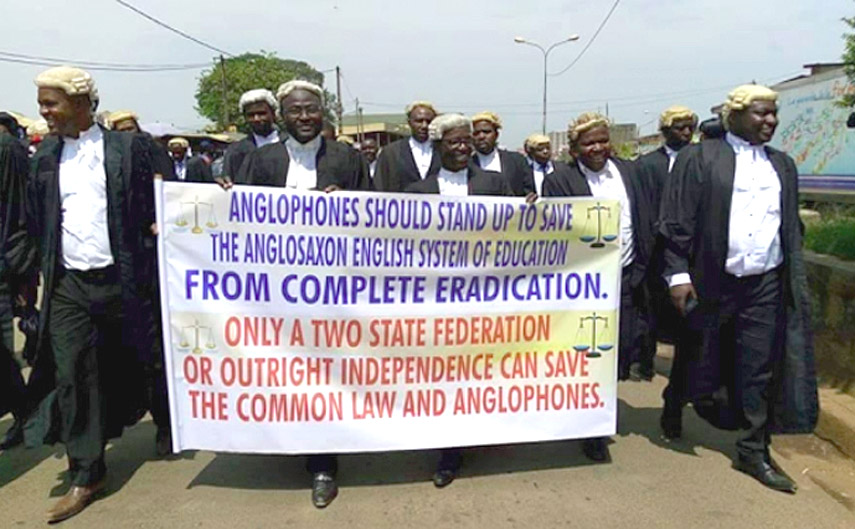 The feeling of exclusion experienced by Anglophones has been further reinforced because of the infrastructural deficit in their region, the low representativeness of its nationals in the administration and in high positions of sovereignty. For the separatists, the specificities linked to their history are not taken into consideration in the institutions of the Republic and in the sub-regional institutions in Central Africa. A strong presence of French-speaking officials who do not speak English in the Anglo-Saxon education and legal sub-system contribute considerably to weakening and discrediting the administration among the population. It is in this deleterious context that the ideology of self-determination, even independence, fostered by leaders scattered throughout the administration, the diaspora and civil society organizations, grows more and more.

From corporatist demands to the emergence of a civil war

There were mass arrests following a peaceful demonstration by lawyers and teachers of the Anglo-Saxon subsystem on November 19,  2016 in the English-speaking city of Bamenda. Since then, under the leadership of civil society and diaspora actors, we have witnessed a strategic and highly amplified coordination on social media of actions of civil disobedience in locked-down English-speaking regions. Social media allows protesters to counter repression and maintain the protesters’ fight beyond the constraints imposed by the government.

While calling for dialogue, the government proceeded with targeted arrests and cut off the Internet in all English-speaking regions for 94 days. These measures only led to a deterioration of the situation. Faced with the blockade maintained in all English-speaking cities, the government made some concessions to allow recruitment of English-speaking student magistrates and clerks, a special recruitment of more than 1500 bilingual teachers, the creation of faculties of medicine and engineering in Anglo-Saxon universities, the creation of a commission in charge of bilingualism and multiculturalism, the reestablishment of the Internet and the release of a good number of protesters in return for the lifting of the blockade imposed by the leaders of civil society in this area. But the leaders of the protest proclaimed on October 1, 2017 the independence of Southern Cameroon, renamed Federal Republic of Ambazonia. This has been the culmination of the crisis.

The situation remains bad, with continuing arrests, armed repression and the emergence of several armed militias called Ambazonia Defence Forces targeting the regular army, and it is worsened by the grafting of the terrorism that rages in the region of the Far North, as well as a post-electoral crisis in 2018.

In search of a lasting solution of peace

It’s still possible to stop the bleeding and abolish this war. The UN Security Council should consider sending an unarmed peacekeeping force or peace observers to urgently negotiate a ceasefire in the English-speaking regions and begin an inclusive dialogue in the presence of a facilitator and international observers.

The release and armistice of political prisoners would help. A rotation of power (after 39 years)  and credible elections could save the country from total eruption, which could then destabilize the entire sub-region.

Tribalism and hatred have been orchestrated in Cameroon to destroy the possibility of living together. The nation is too fragile to remain static in this crisis. The principle of rotation itself is cosmological in nature. Any body, any organ, any social organization, any structure that does not move, that is not in a dynamic of renewal is doomed to suffocation and death. 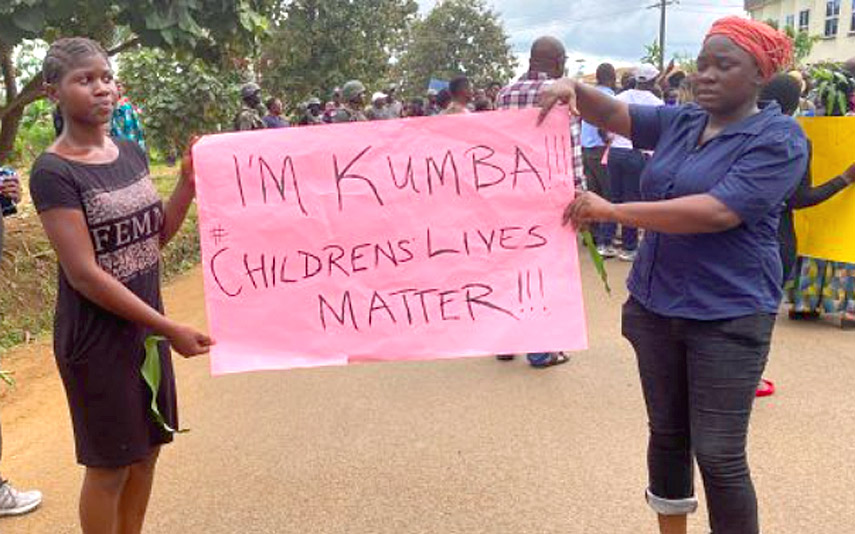 Hippolyte Eric Djounguep is Peace Research and geopolitical analyst for the French magazine Le Point and contributor to the BBC and the Huffington Post. He is the author of several books including Crise Anglophone au Cameroun. Guerre sauvage? (2020), Cameroun – crise anglophone: Essai d’analyse post coloniale (2019), Géoéconomie d’une Afrique émergente (2016), Perspective des conflits (2014) and Médias et Conflits (2012) among others. Since 2012 He has made several scientific expeditions on the dynamics of conflicts in the African Great Lakes region, in the Horn of Africa, in the Lake Chad region and in Ivory Coast.