World BEYOND War · Chapter Leaders in Cameroon, Canada and Germany

“In our schools, we’re observing an increase of violence. The school community, the parents … the decision makers also need to be educated. They are showing bad examples to our students. A political leader who can be a minister, who can be the president of the republic, can behave differently than what we just taught our children.” – Guy Feugap, World BEYOND War Cameroon

“We can stop facilitating the arms trade. We can drop the supply of weapons. The Dow Jones went up by 150 % since 9/11. Raytheon and Lockheed Martin went up by 1700%. It’s called war profiteering, and this is taxpayer money, and we have to say STOP.” – Helen Peacock, World BEYOND War South Georgian Bay

“A problem in the German peace movement at the moment: that a lot of groups are opening up a little bit to the right spectrum. They think we are so weak, it’s affected the German peace movement, there’s a certain weakness … we are getting into this mix where people are willing to open up to information channels that are opening up to the right side. That’s a big problem.” – Heinrich Buecker, World BEYOND War Berlin

For the 23rd episode of our podcast, we spoke to three of our chapter leaders: Guy Feugap of World BEYOND War Cameroon, Helen Peacock of World BEYOND War South Georgian Bay, and Heinrich Buecker of World BEYOND War Berlin. The resulting conversation is a bracing record of the intersecting planetary crises of 2021, and a reminder of the crucial need for resistance and action on both regional and global levels. 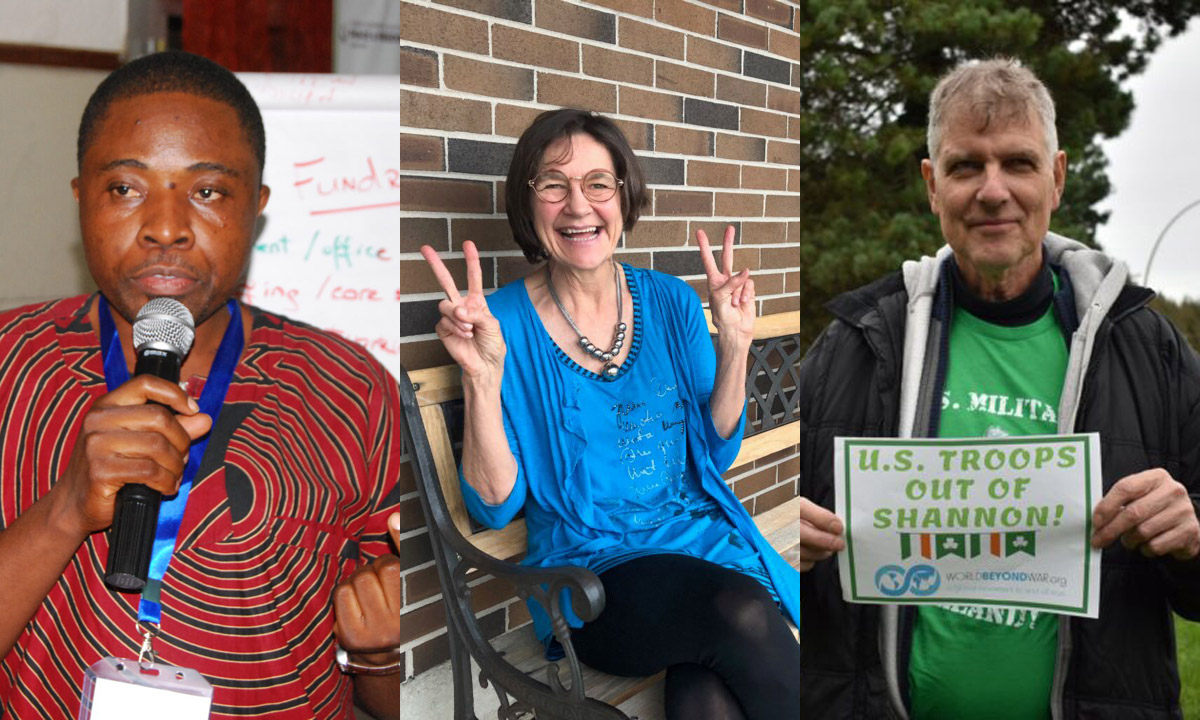 World BEYOND War’s regional chapters are where local and international peacebuilding efforts meet. Our first speaker Guy Feugap of Yaoundé, Cameroon described the alarming situation his country has been in since 2016. Guy Feugap is a teacher as well as a peace activist, and spoke passionately about the way his country’s cultural and political breakdown has affected the behavior and attitudes of the children he sees every day.

Most peace activists around the world do not live in actual war zones, and Guy Feugap’s opening words in our conversation stand as a reminder of the real-world urgency of the problem everybody at World BEYOND War is working to solve. Helen Peacock founded the South Georgian Bay chapter two years ago, and spoke about the paradox of Canada’s increased military spending and complicity with war profiteering corporations, even as the people of Canada rest easily in the belief that they are a country fully at peace.

Heinrich Buecker has been running the Berlin chapter of World BEYOND War since 2015, and also runs an antiwar cafe in downtown Berlin and participates in many local protests. Heinrich added an element of geopolitical awareness to our conversation, emphasizing the role of NATO in provoking Russia and the outrage of the massive DEFENDER 21 military exercises in Europe. Heinrich also spoke about the current resurgence of right-wing movements in Germany.

Other topics we touched upon include the book “Why Civil Resistance Works” by Maria J. Stephan and Erica Chenoweth. Musical excerpt: “Pigs” by Roger Waters.