Resistance & Reconstruction: A Call to Action 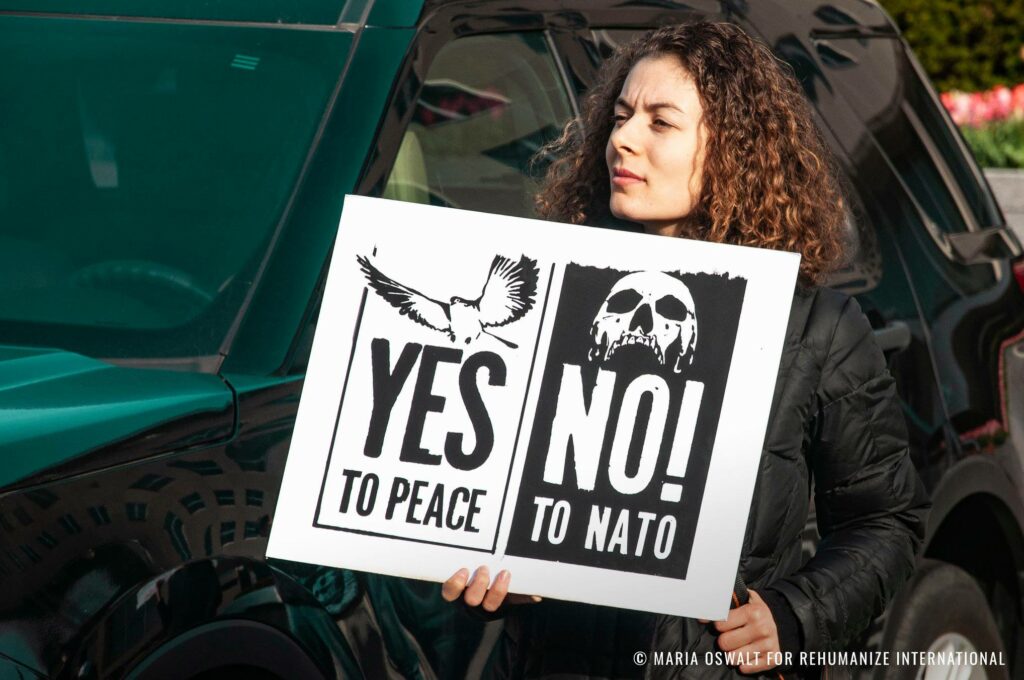 We live in an era of information, where news from every corner of the globe is accessible at our fingertips. The problems of the world are laid bare in front of us, as we scroll through a feed at the breakfast table. Sometimes it can seem like we teeter at the tipping point, between knowing enough to motivate us to act for change, or knowing so much that it overwhelms and paralyzes us from taking action.

When we examine the multitude of social and ecological ills that our species faces, the institution of war lies at the heart of the problem. War is a top cause of the erosion of civil liberties, the basis for the hyper-militarization of local police forces, a catalyst for racism and bigotry, an influence behind the culture of violence which invades our lives through video games and Hollywood films (many of which are funded, censored, and scripted by the U.S. military to portray warfare in a heroic light), and a central contributor to the growing global refugee and climate crises.

Millions of hectares in Europe, North Africa, and Asia are under interdiction because of tens of millions of land mines and cluster bombs left behind by war. Hundreds of military bases around the world leave lasting environmental damage to soil, water, air, and climate. The U.S. “Department of Defense” emitted more CO2 in 2016 than 160 other nations worldwide combined.

It is this holistic lens, illustrating the deep intersections between war and inequality, racism, and environmental destruction, that drew me to the work of World BEYOND War. Founded in 2014, World BEYOND War grew out of the need for an international grassroots movement that holistically opposes the entire institution of war – all forms of warfare, violence, and weaponry – and proposes an alternative global security system, one based on peace and demilitarization.

Five years later, tens of thousands of people from 175 countries worldwide have signed our Declaration of Peace, pledging to work nonviolently towards a world beyond war. We’ve created a suite of resources to debunk the myths of war and offer strategies for demilitarizing security, managing conflict nonviolently, and cultivating a culture of peace. Our educational programs include our book, study and action guide, webinar series, online courses, and global billboards project. We’ve put up billboards worldwide to draw attention to the fact that war is a $2 trillion a year business, an industry that perpetuates itself without any benefit except financial profit. Our most jaw-dropping billboard ad: “Just 3% of U.S. military spending – or 1.5% of global military spending – could end starvation on earth.”

As we grapple with this overwhelming information, and seek to make systemic change to address militarism, poverty, racism, ecological destruction, and so much more, it is vital that we combine the messaging and tactics of resistance, with a narrative and lifestyle of positivity. As an organizer, I often get feedback from activists and volunteers who are burned-out by seemingly endless petitioning and rallying, with glacially slow results. These acts of resistance, of advocating for policy change from our elected representatives, are a core part of the necessary work to move us towards an alternative global security system, one in which legal frameworks and structures of governance uphold justice over profit.

However, it is not enough alone to sign petitions, go to rallies, and call your elected officials. In conjunction with reforming policies and governance structures, we must also rebuild community, by rethinking the means in which we operate – the modes of agriculture, production, transportation and energy – not only to lessen our eco footprint, but additionally, to reclaim socio-cultural practices and regenerate local economies. This practical approach to change-making, through lifestyle choices and community-building, is critical, because it nourishes us in a way that resistance alone cannot. It also aligns our values and political views with our daily choices, and, critically, it gets us closer to the alternative system that we want to see. It puts agency in our hands, that while we petition our elected officials for change, we also take steps in our own lives to foster justice and sustainability, by reclaiming and localizing access to land and livelihood.

Divestment is one such tactic that uniquely combines resistance and reconstruction. World BEYOND War is a founding member of the Divest from the War Machine Coalition, a campaign that aims to take the profit out of war by divesting individual, institutional, and governmental funds from weapons manufacturers and military contractors. The key piece of the work is the second part, the reinvestment. As public and private funds are un-invested in companies that supply the tools of warfare, those monies must be reinvested in socially responsible solutions that foster sustainability, community empowerment, and more. Dollar for dollar, a University of Massachusetts study documents that investing in peacetime industries like health care, education, mass transit, and construction would produce more jobs and in many cases, better-paying jobs, than would spending that money on the military.

As an entry point for activism, divestment presents multiple avenues for engagement. First, as individuals, we can evaluate where we’re banking, what institutions we’re investing in, and the investment policies of the organizations that we donate to. Developed by As You Sow and CODEPINK, WeaponFreeFunds.org is a searchable database that ranks mutual fund companies by percentage invested in weapons and militarism. But beyond the individual level, divestment presents opportunities for scalable change-making, on the institutional or governmental level. Using our strength in numbers, as shareholders, congregations, students, workers, voters and taxpayers, we can mount campaigns to pressure institutions and entities of all kinds, from churches and mosques, to universities, unions, and hospitals, to municipalities and states, to change their investment policies. The outcome of divestment – moving money – is a tangible goal that takes a direct hit at the institution of war, by undermining its bottom line, and stigmatizing it, along with the governments and institutions that invest in war-making. At the same time, divestment provides us, as activists, with the agency to determine how we want to reinvest that money to foster the quality culture that we want to see.

As we peel back the layers of the war machine, we can carry this work into other arenas of our lives, to broaden the definition of divestment and the means for self-determination and positive change-making. Beyond changing our banking practices, other first steps include changing where we shop, what we eat, and how we power our lives. Making these daily lifestyle choices is a form of activism, with reverberating impacts on corporate and government policy. By changing our modes of operation to more sustainable, self-sufficient systems, we divest from extractive industries and corporate monopolization, and we commit to an alternative model based on community, cooperative economics, and the regionalized production of goods to minimize environmental impact and maximize local benefit. These choices align lifestyle with our values upheld through political and grassroots activism. It is critical to do this work of “positive reconstruction,” at the same time that we actively advocate, petition, and rally for the tearing down of structural barriers, governance frameworks, and systemic policies that perpetuate war, climate chaos, and injustice.

War, and ongoing preparations for war, such as the stockpiling of weapons and the build-out of military bases, tie up trillions of dollars each year that could be reallocated to social and ecological initiatives, such as health care, education, clean water, infrastructure improvements, the just transition to renewable energy, job creation, the provision of livable wages, and so much more. And while society remains based on a war economy, government military spending actually increases economic inequality, by diverting public funds into privatized industries, further concentrating wealth into a smaller number of hands. In short, the institution of war is a hindrance to every positive change that we want to see in this world, and while it remains, it intensifies climate, racial, social, and economic injustice. But the monstrosity and enormity of the war machine must not paralyze us from doing the work that must be done. Through World BEYOND War’s approach of grassroots organizing, coalition-building, and international networking, we’re leading campaigns to divest from war, close the network of military bases, and transition to a peace-based alternative model. Cultivating a culture of peace will take nothing less than a multi-pronged approach of grassroots advocacy for institutional and governmental policy change, in coordination with redesigning local economies, reducing consumption, and relearning skills for community self-sufficiency.