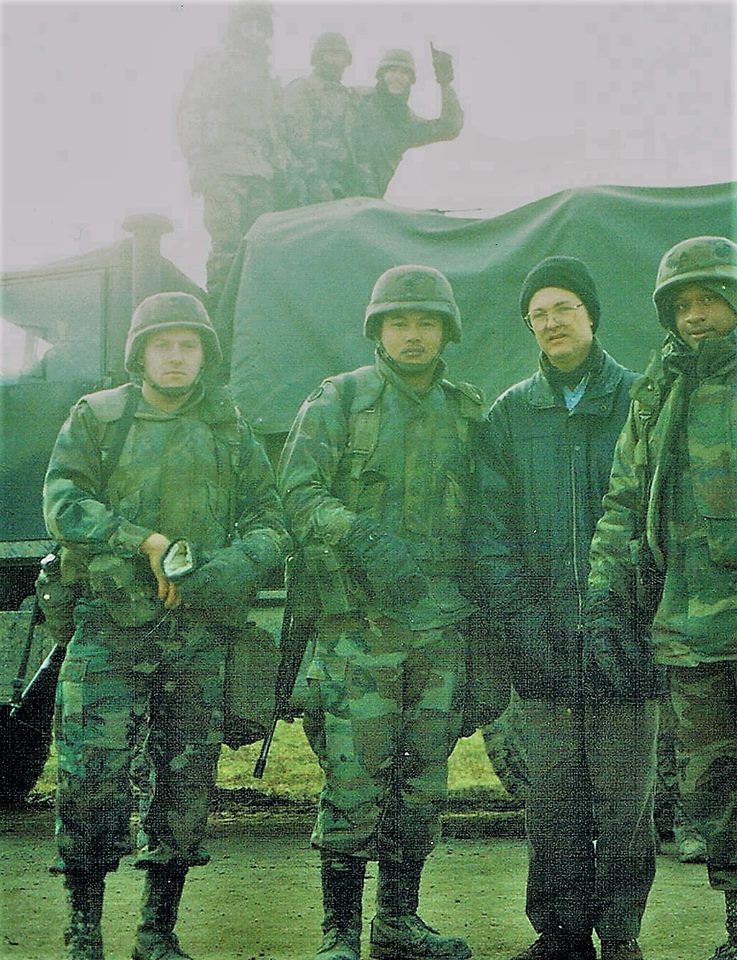 I remember standing on the banks of the Sava River in Zupanja, Croatia in January of 1996 watching a force of 20,000 US Army soldiers and their vehicles as they crossed the Sava to Orasje, Bosnia-Herzegovina. The U.S. Army had just completed building a pontoon bridge to replace the highway span that had been destroyed during the war. The Americans built the bridge spanning the 300-meter Sava in just a few days, strong enough to hold massive tractor trailer trucks carrying 70-ton (63,500 Kg) Abrams tanks. The locals were awestruck. So was I.

I was stunned by the enormity and precision of the operation. Trucks carried fuel, food, weapons, and a variety of supplies for the force. The military vehicles passed by me at about 7-8 KPH as they entered the bridge. I witnessed the force move for an hour and I could still see the column coming from the Croatian countryside when I left. “Dude, where you from?” I shouted out. “Texas,”  “Kansas,” “Alabama,” came the reply, as the column proceeded southward. 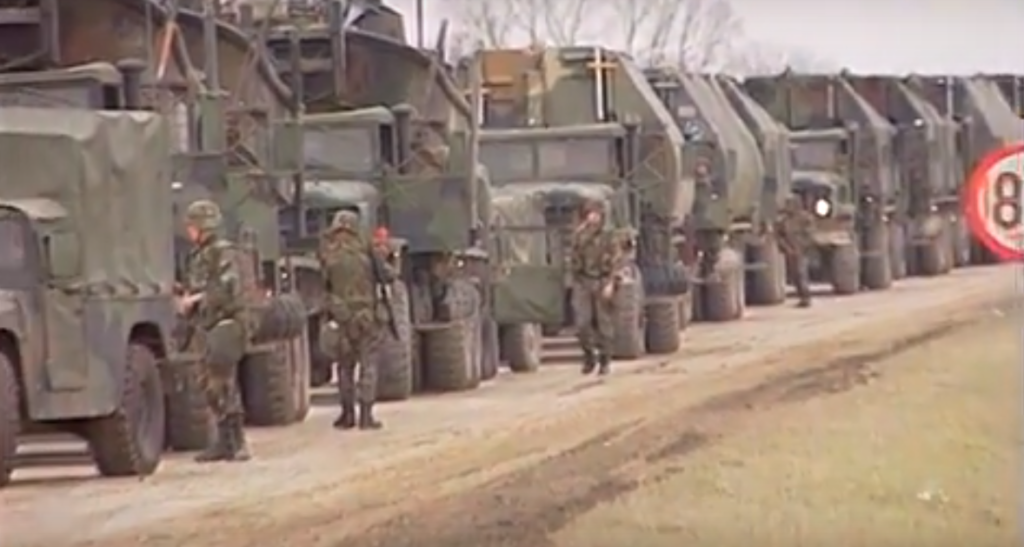 U.S. Army vehicles just outside of Zupanja, Croatia in January, 1996. The U.S. headed the Stabilization Force in Bosnia and Herzegovina (SFOR), a NATO-led multinational peacekeeping force after the Bosnian war.

People in the town were amazed and delighted to have international attention. One woman described several presumed US soldiers in scuba gear swimming in the December waters near her house a few days earlier. “We knew something was up then,” she said. Others told me the sporadic shelling of the town from the Bosnian side of the river stopped when the first Americans appeared. “We don’t want the Americans to leave,” they told me. “They probably won’t,” I assured them.

I was more distrustful of my government than they were, but it helped me to realize the good this amazing force might do if it could be subjected to sober international oversight, and even then, there would be issues managing the weaponry and questions regarding the use of force. I realized that US deployments  were about sending a clear message of military strength to the European public – the west as well as the east.

An obsession with inflating any real or imagined Russian threat has fueled American militarism since the beginning of the Cold War. In fact, the bombing of Hiroshima and Nagasaki, historians increasingly believe, was done primarily to send the Soviets a message.

There’s little opposition in Washington to current war preparations.  It’s a testament to a vicious propaganda program executed by the Pentagon, Congress, arms dealers, and the media that continuously paints Russia as a dangerous military threat. During the recent impeachment hearings against President Trump the American people were told a thousand times that a fledgling, though well-intentioned Ukrainian democracy was threatened by the Russians, and that Trump jeopardized U.S. national security by stalling the delivery of  desperately needed American weaponry. The public is frequently reminded by the mainstream cable news networks and newspapers representing both sides of the political divide that Russia invaded Ukraine in 2014, while accompanying historical analysis is largely lacking.

Never do they tell us about NATO’s unnecessary and threatening enlargement to the Russian border since the end of the Cold War. Never do they tell us of the American role in the events of 2014 in Ukraine. My friend, Ray McGovern does a great job explaining the U.S. role. Generally, there is little bipartisan agreement in Congress, although just about everyone agrees on the need for larger military budgets to check the Russians – and the increasingly feisty Chinese.

It is against this backdrop that the Americans bring you Defender 20, the largest U.S. military exercise on the continent since SFOR in Bosnia and Herzegovina. The exercises will coincide with the 75th anniversary of the Soviet Union’s liberation of the continent from fascism, a preposterous historical irony. Today, the stated aim of the U.S. Army Europe is to project force that will deter the Russians from any sort of military adventurism. This is a grand absurdity.

American warmakers knew Moscow would act forcefully if NATO and its American puppet masters claimed Crimea and Russia’s only warm-water naval base. The American military and intelligence apparatus require a threatening adversary to fuel the machine, so it created one.

U.S. military spending is now up to $738 Billion while European spending is nearing $300 billion a year.  It’s a fast and furious gravy train that runs over domestic needs.

The Russians spend about $70 billion annually while the Germans alone will top $60 Billion in military spending by 2024.

NATO generals are convinced they can deter faux Russian adventurism by creating large fighting forces on the ground close to the Russian border in a few short days.  It’s about logistics and imperial, geostrategic hubris.

Security with the Russians must take an honest and verifiable path toward disarmament.  The Russians don’t want to pick a fight. Instead, they’re worried about storm clouds gathering from the west, a recurring historical event.

American war planners seem oblivious to history, like the events of Leningrad in 1941. The Americans defeated Nazi Germany during World War II.  What else is there to know?

Is this chapter of history taught at the Army War College in Carlisle, Pennsylvania?  If so, what lessons are taught? Are the young officers told that more than 20 million Russian citizens died during the war?  If so, how might these truths factor into current US policy regarding Defender Europe 20? 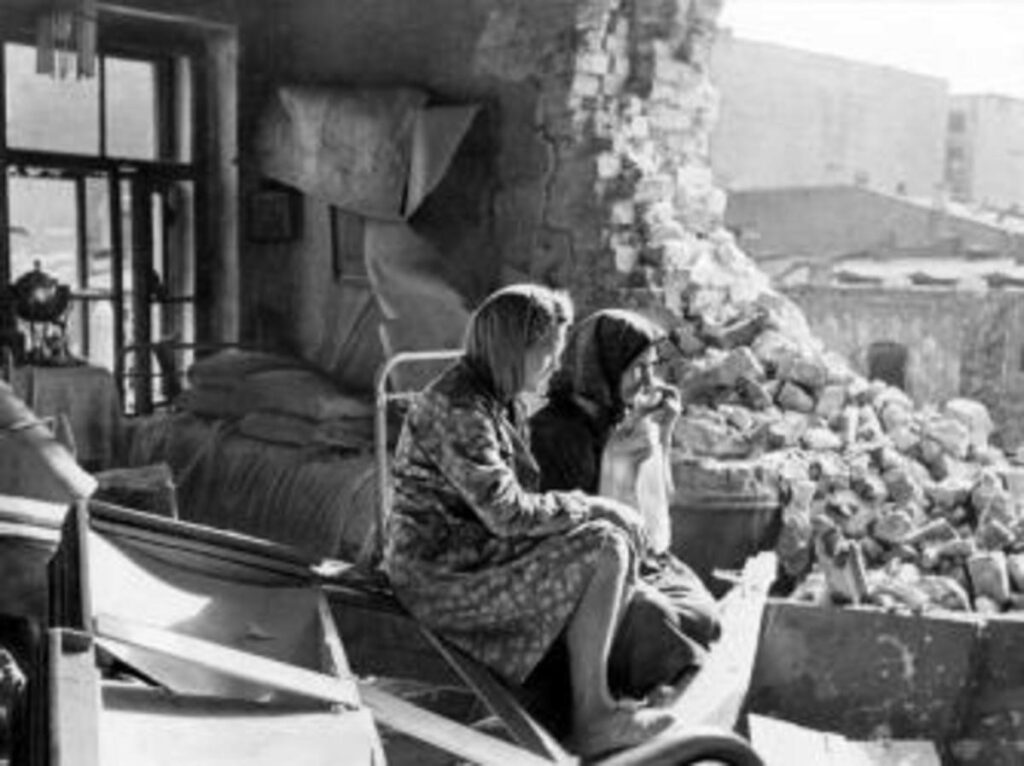 Horror in Leningrad in 1941. Is Europe heading here again?

Defender Europe 20 is a massive, U.S.-led multinational training exercise scheduled to take place from April to May 2020, with personnel and equipment movements occurring from February through July 2020.

20,000 soldiers will deploy from the U.S. mainland, the equivalent of a heavy division, according to Brig. Gen. Sean Bernabe, G-3 for U.S. Army Europe.  About 9,000 U.S. troops stationed in Europe will also be participating, as well as 8,000 European troops, bringing the total participants to 37,000. Eighteen countries are expected to participate, with exercise activities occurring across 10 countries. Material will depart from seaports in Charleston, South Carolina; Savannah, Georgia; and both Beaumont and Port Arthur, Texas. 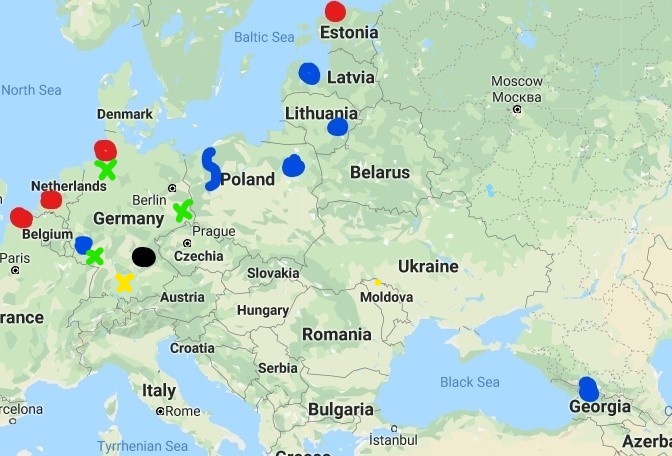 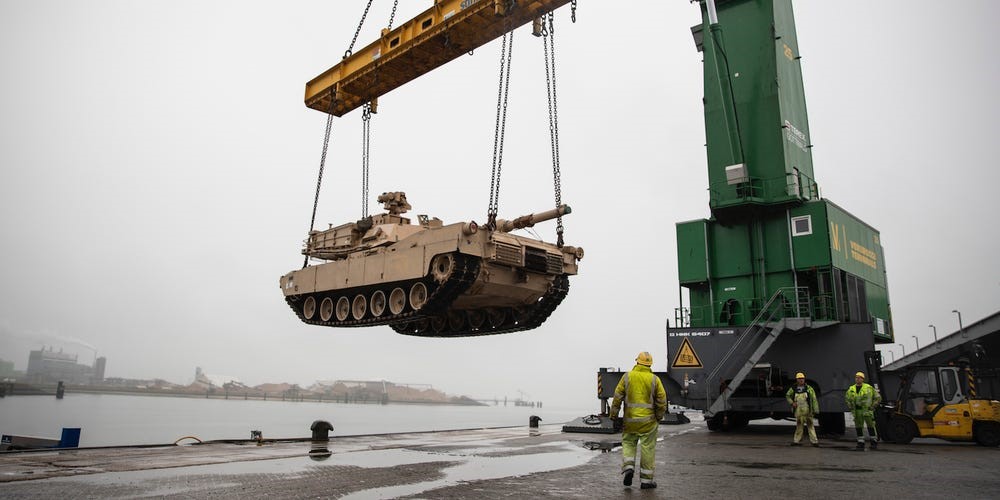 A US Army M1A2 Abrams tank is raised over the pier at the Port of Vlissingen, Netherlands, to be lowered onto a low-barge ship for transport elsewhere in Europe, October 12, 2019. US Army/Sgt. Kyle Larsen

The heavy equipment, including 480 tracked vehicles that are known to destroy highways, will depart from the four seaports and move by water and rail to the fictional/real eastern front. Soldiers will mostly be flying in through major airports in Europe and will travel across the continent by bus. 20,000 pieces of equipment will ship from the U.S. for the exercise.  It’s not clear how much of it will remain on European soil for future faux deterrence purposes and/or for aggression against Russia.

Once in Europe, U.S. soldiers will join allied nations to conduct both simulated and live training exercises across Germany, Poland, and the Baltic states. This will include combined arms maneuver training at undisclosed locations in northern Germany.

Defender is all about the U.S. effort to deliver this force to the continent and then quickly spread it out to a variety of different NATO exercises.

The U.S. Army plans to tinker with its new toys of mass confusion and destruction, like artificial intelligence, hypersonics, machine learning, and robotics.  War planners are elated with their promise. According to Brig. Gen. Sean Bernabe, G-3 for U.S. Army Europe, the exercise “features a fictional near-peer competitor and actually puts that competitor on European terrain to allow us to get some good repetitions in large-scale ground combat,”  “The scenario will be set in a post-Article V environment … and it’s actually going to be set in the year 2028.”

This is military-speak, not meant to be clearly understood. 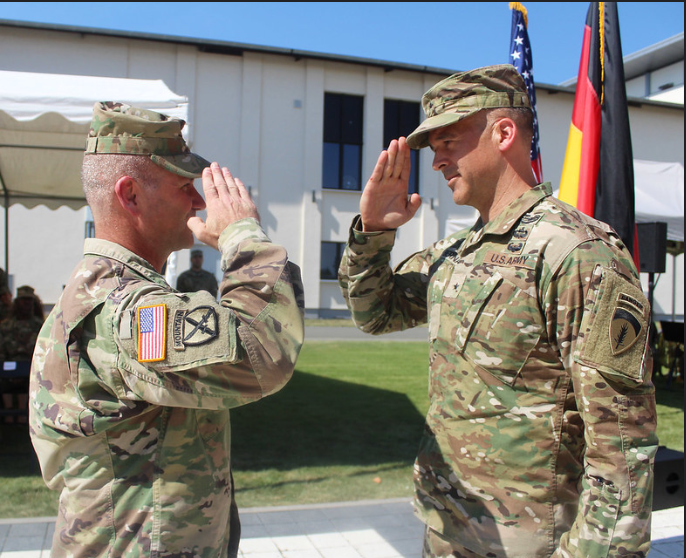 The reference to a “post-Article V environment” sends a message to NATO members and the Russians. NATO states agree in Article V of the Washington Treaty that an armed attack against one or more of them in Europe or North America shall be considered an attack against them all and may be met with armed force by NATO members. Under the treaty, a NATO attack is supposed to be reported to the Security Council. Heretofore, the NATO command had agreed to stop military force when the Security Council steps in to restore security.  General Bernabe’s statement is significant. The U.S. is minimizing the role of the U.N. in its war-planning scenarios while it forges strong bilateral ties with individual states. It’s the stuff of strong-armed real politic. There shall be no authority above the U.S.

The 1st Cavalry Division Artillery Command from Fort Hood, Texas, will deploy approximately 350 personnel who will serve “as the primary training audience for both a command post exercise in Grafenwoehr, Germany and a live wet-gap crossing taking place in Drawsko Pomorskie Training Area in northwestern Poland,” according to the U.S. command.   The Mississippi National Guard’s 168th Engineer Brigade will provide the mobility capability for the Drawsko Pomorskie river crossing of 11,000 U.S. and allied troops.

14 sets of M1A2 Abrams tanks will arrive with Trophy active defense systems, which use sensors, radar and computer processing to destroy incoming rocket propelled grenades and anti-tank guided missiles.  The U.S. Army has awarded a $193 million contract to the Israeli firm Rafael Advanced Defense Systems Ltd. and is looking forward to testing it out.

Visit No to NATO – No to War for updates on these military maneuvers and opposition to it.

German Foreign Policy.com  Oct.7, 2019: Testing the Mobilization against the East

Defense News.com  Oct. 14, 2019: Fighting the bureaucracy: For NATO, the Defender 2020 exercise in Europe will test interoperability

Army Times November 12, 2019: Here’s how – and which – US Army units will move across the Atlantic this spring