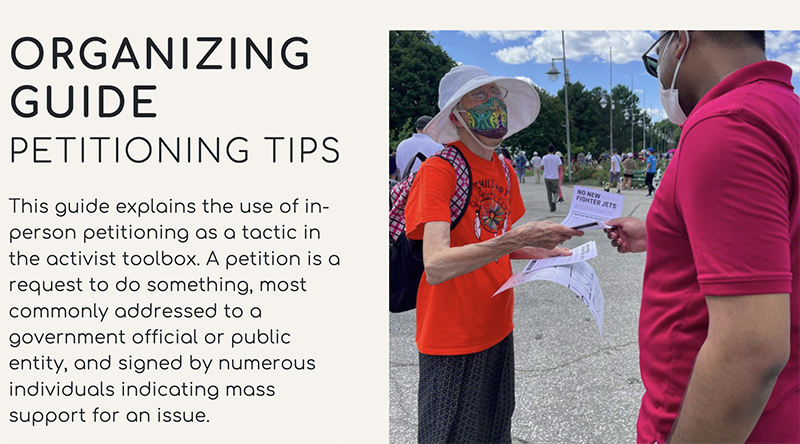 World BEYOND War has published a new how-to activist guide PDF, this one on how to do petitioning.  A collection of such guides covering topics including how to use billboards, how to do a car caravan, how to ban militarized policing, and how to plan a nonviolent action, can be found in WBW’s resources database.

This new guide explains the use of in-person petitioning as a tactic in the activist toolbox. A petition is a request to do something, most commonly addressed to a government official or public entity, and signed by numerous individuals indicating mass support for an issue. Petitioning can be a very effective tool not just for collecting signatures to garner support on a particular campaign, but also for organizational list-building and for recruiting volunteers. By getting someone to stop, sign a petition, and have a short conversation, you create a meaningful, one-on-one connection (“retail-level” recruitment), which may lead to long-term engagement. And, in addition to building our list, by collecting contact info on our petitions, we can follow up with signers later to engage them in the next steps of the campaign.

While this guide is specifically focused on in-person petitioning tips, online petitions or letter campaigns are also a very useful campaign tool in today’s digital age to gather mass support on an issue, particularly for campaigns that are geographically distributed. In-person petitioning can help to supplement an online campaign, or vice versa.

The guide covers how to start a petitioning campaign, how to respect people’s privacy, how to talk with people, how to deal with problems, and how to follow through.

One way to practice signature gathering and build World BEYOND War globally and locally, is to head out with a clipboard and a peace pledge sign-up sheet. The skills in this new guide can also be very helpful in building up a petition in support of passing a local resolution — tips on that are here. Other local campaigns in which a petition can be a major component include campaigns for divestment of funds from weapons, or the prevention or closure of a military base.

As noted, a realworld petition can work together with an online petition. Contact World BEYOND War for help with either or both. Examples of WBW’s online petitions are here.