Sally-Alice Thompson: A Life Dedicated To Peace And Justice For All 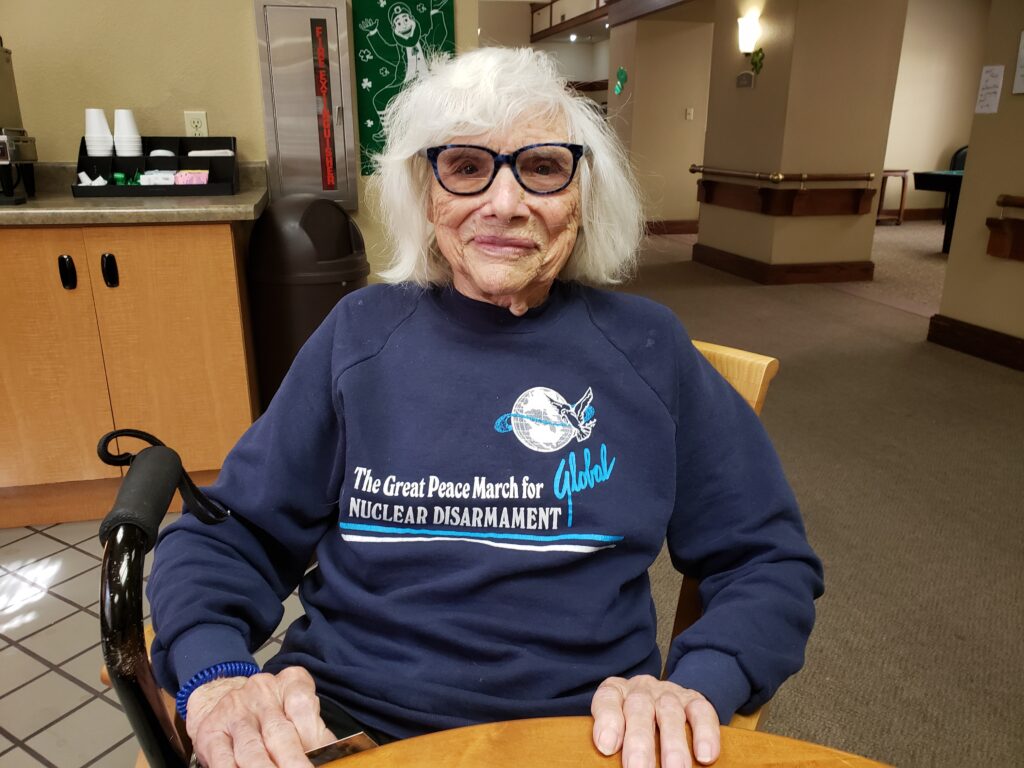 Sally-Alice Thompson has led a life so full of incredible accomplishments and adventures that it’s hard to know where to start.

We could begin with the time she traveled 450 miles by foot and by bus with a group of Americans and Soviet citizens in 1987 from what was then Leningrad to Moscow to promote peace and nuclear disarmament.

“At every town, we were welcomed enthusiastically,” Thompson, 95, recalled. “They brought us flowers and big, flat loaves of bread and little treasures that meant something to them. They were so happy to see Americans who didn’t hate them.”

We could start with how she participated in a similar anti-nuke walk, called the Great Peace March, a year before that, beginning in Los Angeles and ending in Washington, D.C., nine months later.

Perhaps we begin with how she was one of the first women to serve with the Albuquerque Police Department. Or how she served in the Navy during World War II. Or how she taught elementary school in Albuquerque for 20 years.

Maybe we start with how she and her husband, Donald Thompson, also a Navy veteran, school teacher and a former state legislator, founded the Albuquerque chapter of Veterans for Peace after both came to believe the cost of war was far too high and the justice shown veterans far too low.

Maybe we begin with the many other marches she has participated in against the wars in Vietnam, Iraq and Afghanistan, the 2005 protest at then-President George W. Bush’s ranch in Crawford, Texas. Or how in 2014 at the age of 91, she trekked for 13 days from Albuquerque to Santa Fe in support of MOP, or Money Out of Politics.

It might do well to begin with a discussion of her travels around the globe from Turkmenistan to El Salvador to teach and to learn, and how that global awareness prompted her to open her Ridgecrest home to refugees and immigrants.

Or we could start with her affiliation with the Raging Grannies, women of a certain age who detest and protest war and injustice.

Thompson taught herself to play guitar and compose some of the songs the Grannies sing at protests.

We might begin with the two books she has written – one a memoir, the other a novel.

Or how she and her husband became charter members of the Albuquerque Center for Peace and Justice and paid off the mortgage to its location at Harvard and Silver SE.

“She’s inspired many, including me,” said Samia Assed, president of the center’s coordinating council. “She’s active to this very second.”

But perhaps the most important story is the one that begins with Thompson as a child of the Great Depression, the oldest of five children born to parents who moved the family from farm town to farm town throughout the Midwest in search of a better life they never found.

“Everyone was poor, and we were the poorest,” she said.

She recalls that her parents were both anti-war, that her father was a conscientious objector during World War I. Despite her parents’ opposition, she joined the Navy.

The military, she said, was a way out of poverty and a way into higher education. For her, it seemed the only way. That, she said, already seemed wrong.

“We should not have to go to war just to go to college,” she said. “Education should be accessible for all, no matter how rich or poor.”

It was that sense of fairness for all, that desire to make something from nothing, that became the catalyst for why she has marched, protested, toiled and sung her truth.

“I’ve always been concerned with justice,” she said. “I don’t think being born in America makes you special. We don’t choose where we are born. People, wherever they are born, deserve to have rights, deserve to have justice and peace.”

Thompson walks six miles each day, but she is slowing down – not being as efficient, as she puts it. Her body is stooped and frail, her hearing fading, but her mind and her memory are as sharp as ever.

“I outlived everybody,” she said, referring to her husband, her two children and her siblings and parents. “I don’t know why.”

She still sings with and writes songs for the Raging Grannies, still mails out newsletters for the Center for Peace and Justice, still makes phone calls for candidates and causes, still cares about a world that she still believes is worth fighting for.

These days, she sees the pendulum swinging toward authoritarianism and privilege for the few.

But she also sees the slow rise of a new generation willing to keep fighting for peace and justice, to protest, to march, to care.

It’s just going to take time for them to catch up to her.