Protest Held in Montreal Against Purchase of F-35 Fighter Jets 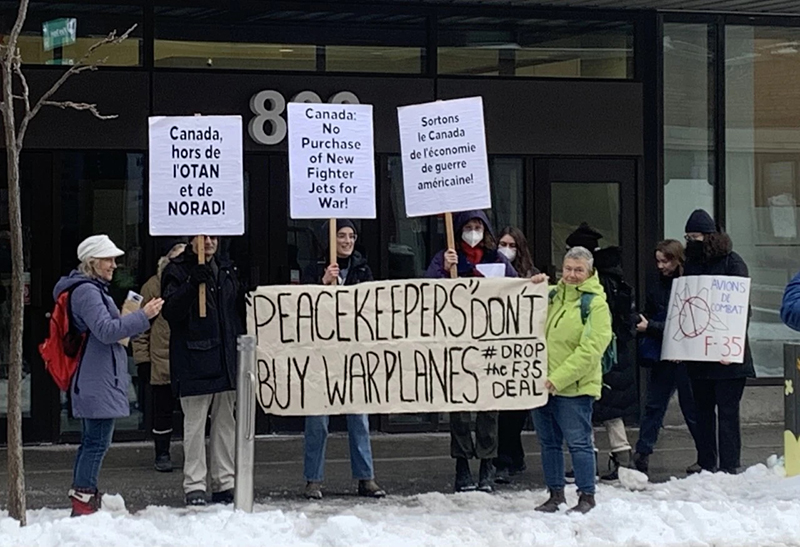 In Montreal, a demonstration took place downtown, where chants of “no new fighter jets,” could be heard outside of the offices of Canada’s Environment Minister Steven Guilbeault.

The No Fighter Jets Coalition — a group of 25 peace and justice organizations in Canada– says that F-35 jets are “killing machines and bad for the environment,” in addition to being an unnecessary and excessive expense.

The federal government deal to purchase 16 fighter jets from American manufacturer Lockheed Martin has been in the works since 2017.

In December, Defence Minister Anita Anand confirmed that Canada is set to finalize a contract in the “very short term.”

The purchase price is reportedly $7 billion. The goal is to replace Canada’s aging fleet of Boeing CF-18 fighter jets.

Canada’s Department of National Defence told Global News in an email that the purchase of a new fleet is necessary.

“As Russia’s illegal and unjustifiable invasion of Ukraine demonstrates, our world is growing darker and more complex, and the operational demands on the Canadian Armed Forces are increasing,” said Jessica Lamirande, a spokesperson for the department.

“Canada has one of the largest expanses of coasts, land and airspace in the world – and a modern fleet of fighter jets is essential to protect our citizens. A new fighter fleet will also allow the aviators of the Royal Canadian Air Force to ensure the continued defence of North America through NORAD, and contribute to the security of the NATO alliance.”

Garfinkel does not agree with the government’s approach.

“I totally understand the need to argue for increased militarization in times of war,” she said. “We believe that in order to mitigate the chances of war in the future there needs to be steps towards actual development and steps towards mitigating the things that actually prevent war, such as increasing food security, housing security…”

As for the environmental aspect, Lamirande added the department is taking steps to reduce the potential impacts of the project, such as designing their new facilities as energy-efficient and net-zero carbon.

The government says they have also conducted an assessment of the jets’ environmental impact, concluding that it would be the same as those of the existing CF-18 aircraft.

“In fact, they may be lower as a result of reduced use of hazardous materials, and planned capture of emissions. The analysis supports the conclusion that replacing the current fighter fleet with the future fighter fleet will not have an adverse impact on the environment,” Lamirande wrote.

As for the coalition, organizers are planning to hold rallies in British Columbia, Nova Scotia and Ontario from Friday to Sunday.

They will also unfurl a banner on Ottawa’s Parliament Hill.