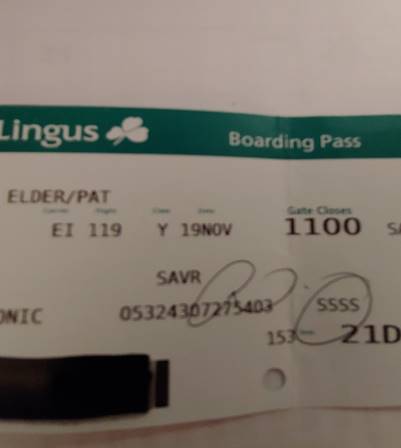 I knew something wasn’t right when I tried to download my boarding pass onto my iPhone while I was in Dublin over the weekend. I kept getting an error message as I entered the information on my flight back to Washington.  I had been in Ireland as a representative from World Beyond War to address a “No to NATO” conference on how the US military poisons ground water  in communities that are adjacent to US bases around the world.

When I got to the airport I tried using the kiosk to print out my boarding pass but it didn’t work either, so I stood in one of those long zig-zag lines for my boarding pass. I had enough time so I wasn’t freaking out, although I was irritated because I didn’t need to check in luggage.

I went through airport screening without a hitch and I passed through American airport security, although it took quite a while. I wondered why the US government requires everyone to submit to security screening a second time. I figured they simply don’t trust Irish authorities. After packing up my things, putting on my shoes and relocating my coat, cell phone, keys, belt, and wallet, I headed for the gate.

That’s when I was pulled aside for Secondary Security Screening Selection, (SSSS).  It was pointed out to me by the two Transportation Security Administration (TSA) officials as they led me to the separate screening area that my boarding pass contained the letters SSSS. “Why me?” I asked. They assured me that the program was entirely random. “Must be my lucky day,” I said, and they laughed.  Then, I remembered the brief delay I experienced when I initially landed in Dublin a few days earlier.

On that day, the Irish customs officer was a pleasant fellow. He took my passport and pecked at his keyboard for a few seconds before asking what was the purpose of my visit. “Was it business or pleasure?” he asked. I said it was both. “Oh!” he said, “It’s nice to do both!”  “What kind of business do you do?” Although I couldn’t see his screen, I could see he was clicking around a bit more than normal. I told him I was attending a conference on Ireland’s relationship with NATO. There was a long pause and I thought, “I’ll be damned. I’m not doing anything wrong while my government is systematically murdering innocent people around the globe.” It’s the way I think. In your face, dude, nothing personal, I thought. As he spent more time clicking around, he said he didn’t think Ireland was part of NATO and I replied, “Yes, that’s true, and a lot of us would like to keep it that way.” He smiled, stamped my passport and said, “Enjoy Ireland.”

Back at the departure terminal, the two TSA officials had me remove all of my belongings from my baggage and I was asked to power up my laptop and surrender it, along with my cell phone. One of them disappeared for a few minutes with my devices and apologized for the inconvenience.  They rifled through all of my belongings, my dirty clothes, various pamphlets and antiwar materials I had collected in Liberty Hall where the conference was held. 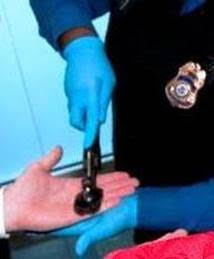 They subjected me to a lengthy and intrusive pat-down. Facing me, the agent brought his hands outside my pantlegs, all the way up between my legs, touching my genitals. This was after I had already been through two full-body scans! There’s a psychological element to all of this, I thought. He asked me to turn around and he repeated the process.

The TSA says the Secondary Security Screening Selection process is a risk-based passenger pre-screening program that enhances security by identifying high-risk passengers before they arrive at the gate. The TSA decides who will receive the additional level of screening by checking the passenger against a list of high-risk flyers. They also say selection may be completely random.

I get it. I pose a “threat” to the United States of America. In 2008 I wound up with 52 others on a terrorist watch list  kept by the Maryland State Police. I appeared on the list because of my work exposing unconstitutional violations of civil liberties by military recruiters who often operate with impunity in the nation’s high schools. The “terrorists” on the watch list included Catholic nuns who bang on nuclear missiles, the leadership of a women’s peace group, a national expert in guerilla theatre and puppet-making, radical environmentalists, a microbiologist who has documented Fort Detrick Maryland’s biological weapons program, a national antiwar leader, anti-death penalty volunteers, activists fighting depleted uranium, and those opposed to cluster munitions.

The Maryland State Police, like the police forces of other states, works in collaboration with the FBI’s Fusion Centers. They’re tracking nonviolent nuns and pacifists and anarchists and environmentalists across the country and around the world.

I was spied on by Homeland Security as reported by the Washington Post in 2009 when they still covered these sorts of things. The HSA listened to my phone calls with other activists around the country who wanted to know how we made those flag-draped coffins that seemed to appear everywhere during the early days of the Iraq and Afghanistan Wars. It apparently bothered someone.

In December of 2005, Lisa Myers of NBC News broke the story about Pentagon spying on peace groups. The accompanying database included my activism.

Once the pat-down was over, I was subjected to a thorough wipe down for explosive residue. They first went through all of my belongings and took cotton swabs of my underwear, clothing and electronics.  The TSA says its Explosives Trace Detection (ETD) process is used to detect explosive residues on an individual or his belongings. The agent uses a sterile cotton swab and attaches it to a long instrument (shown in the photo). The agent used separate swabs to wipe the backs and front of each hand and both sides of both my arms. The also rubbed new swabs against the front and backs of both legs, from my ankles to my knees.

The TSA says the procedure is used to detect explosives. C’mon! They know me and they know I am a nonviolent peace activist. I’m the last guy to be carrying explosives.

Could the ETD procedure be used to collect DNA samples? The TSA says they don’t.  Should we take them at their word?

In any case, they ought to apologize to me and admit their program is an egregious violation of the 4th Amendment of the US Constitution. After all, I’m not doing anything wrong, while the US government has fallen into the hands of those who flout constitutional protections.