The U.S. government took a family away from its house, jobs, schools, and friends, locked up all of its members, and then began ordering the male family members of the proper age to join the U.S. military and head straight off to war.

This wasn’t last month. This was in 1941. And it wasn’t at random. The family was of Japanese ancestry, and the incarceration was accompanied by the accusation of being subhuman creatures but also of being disloyal traitors. None of that makes it acceptable or irrelevant. The relevance is demonstrated by the questioning state of mind in which you just read the headline above. Was the family from south of the border? Were they Muslim? Were they Russian? Evil and abusive practices have been around since long before the abuse of Japanese-Americans during World War II, and are still around today.

This week, the New York Times, published a few new photographs from Guantanamo and claimed that this was something new, even though people had for decades seen very similar and very famous photographs of prisoners in orange at Guantanamo, protesters had worn orange and put the photos on giant posters, violent anti-U.S. fighters had worn orange. Terrorists had said they were acting in response to the outrages at Guantanamo. Of course, someone just wants to generate clicks to the New York Times website, but there’s never a penalty for erasing horrors or for treating them as exceptional.

Back to the family in California. A newly published memoir by Yoshito Kuromiya, with a foreword by Lawson Inada, Preface by Eric Muller, and edited by Arthur Hansen, is titled Beyond The Betrayal: The Memoir of a World War II Japanese American Draft Resister of Conscience. Kuromiya recounts how his family was snatched up from their lives in California and put into a camp beyond barbed wire in Wyoming. In the camp, white — and therefore trustworthy and admirable — teachers instructed the young members of the inferior group on the glories of the U.S. Constitution and all the wonderful liberties it creates. And Yoshito was ordered to join the U.S. military and kill or die in World War II (full humanity and trustworthiness not required). 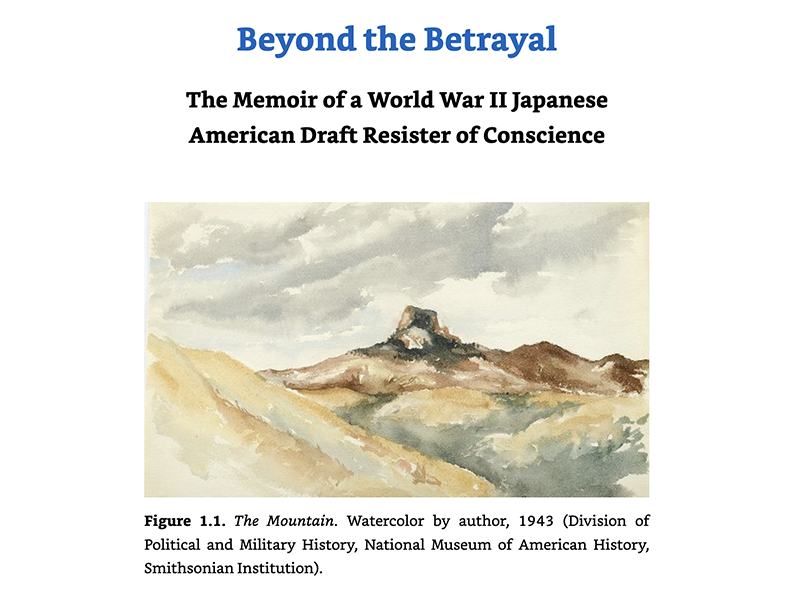 As the book’s title rather gives away, Yoshito Kuromiya refused. Many refused together, and many obeyed together. There was quite a debate, as you might imagine. Should one go and kill and die in the horrific stupidity of war? And should one do so for a government that treats you like this one did? It’s never crystal clear to me, and perhaps it never was to the author, whether he objected to all war. He writes of how horrible it would have been to participate. He also writes that he might have joined in the senseless murder under other circumstances. Yet he also, years later, expresses his support for Ehren Watada’s refusal to participate in the war on Iraq. Perhaps those, too, were just the wrong circumstances. But Kuromiya writes that he regrets not having established at the time of WWII the legal right to refuse war, and he cannot be unaware what a fatal blow to the institution of war that would have been. Nor could he have been unaware that he had resisted the only war of the countless U.S. wars in the past 75 years that most people will even try to defend as morally justifiable.

Kuromiya’s memoir gives us context. He recounts his parents’ immigration and struggles prior to WWII. He says that he’d always been geographically contained by poverty, prior to being contained by guards and fences. After the war, he describes the reversal of things, with the white flight from neighborhoods that Japanese Americans managed to move into. He also recounts the differences of opinion among prisoners, and among guards. He describes the prison in Washington State to which he and other conscientious objectors were sent, including the relatively positive aspects of it, and including the prison guards who would have to stay there longer than the prisoners.

Kuromiya and his fellow resisters went to court and were ruled against by a racist judge, and then had any prospects for a favorable ruling ended by Truman’s pardoning of draft resisters. The U.S. government later admitted its wrong in incarcerating all those families. There’s a monument in Washington, D.C., swearing that they won’t do it again. But the government has never admitted that there was anything wrong with a draft. In fact, were it not for buffoonishly sexist Republicans, the Democrats would have long since added women to draft registration. Nor has the U.S. government, as far as I know, publicly admitted anything particularly wrong about the combination of locking people up and then drafting them. In fact, it still lets courts give convicts a choice of the military over other punishment, lets immigrants be denied citizenship unless they join the military, lets anyone at all lack access to education unless they join the military to acquire funds for college, and let’s kids grow up in such dangerous neighborhoods that the military looks like a safer option.

Kuromiya’s account of what he faced is not what you’ll read in a school-board-approved history text. It’s a first-person witnessing of what happened without any watering down by the heroic greatness of FDR or the all-excusing evil of the Nazis. Nor are Kuromiya’s inconvenient thoughts omitted. He wonders why German- and Italian-Americans were not treated as Japanese-Americans were. He recognizes that the U.S. government took steps to get into a war with Japan, leaving the reader to wonder whether that ability to see past some of the propaganda, not to mention the ability to see Japanese people as human beings, may have influenced Kuromiya’s actions — and to wonder what similar abilities might have meant if more widespread.