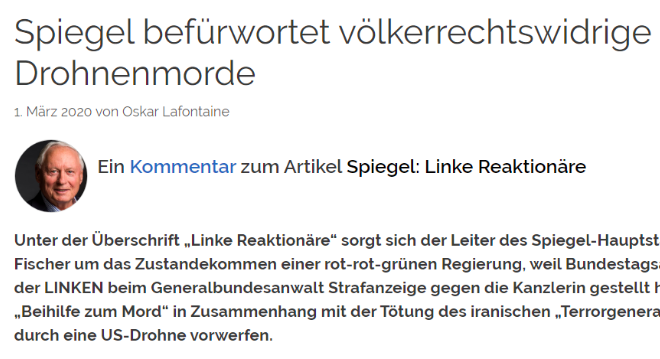 Under the headline “Left-wing Reactionaries”, the head of the Spiegel capital office Fischer worries about the establishment of a red-red-green government because left-wing members of the Bundestag (German Parliament) have filed criminal charges against the Chancellor (Angela Merkel) with the Federal Attorney General for her “assisting to murder” in connection with the killing of the Iranian accused “terror general” Soleimani  by a US drone-strike. This “propaganda lawsuit” shows that in a possible red-red-green coalition with a not insignificant part of a government partner, “no state can be made”.

The MPs‘ complaint not only refers to the murder of Soleimani, but also to the murder of the militia leader Abu Mahdi al-Muhandis, an airport employee and four other people in the vehicle convoy, including bodyguards and drivers.

The head of the Spiegel office, who does not mention these victims of the drone murder, can only be understood in such a way that the murder of a “terror general” by a drone-strike is legal because, as Trump let us know, he “killed thousands of Americans or seriously injured them over a long period”.

Regardless of this absurd legal opinion, editors of the Spiegel should know that the political party DIE LINKE will not participate in a federal government that advocates wars and murder by drone-strikes that violate international law, and that even the Green Party in October 2019 in the Bundestag printed matter 19/14112 have urged the federal government “to ensure that the United States does not use the satellite relay station at Ramstein Air Base to carry out illegal killings” and to clarify to the United States government that “unlawful killings via the satellite relay station at Ramstein Air Base will continue the relay station into question”.

Oskar Lafontaine is a German politician. He served as Minister-President of the state of Saarland from 1985 to 1998, and was federal leader of the Social Democratic Party (SPD) from 1995 to 1999. He was the lead candidate for the SPD in the 1990 German federal election,. He served as Minister of Finance under Chancellor Gerhard Schröder after the SPD’s victory in the 1998 federal election, but resigned from both the ministry and Bundestag less than six months later.