Dear Americans: No Bases Necessary in Okinawa and South Korea 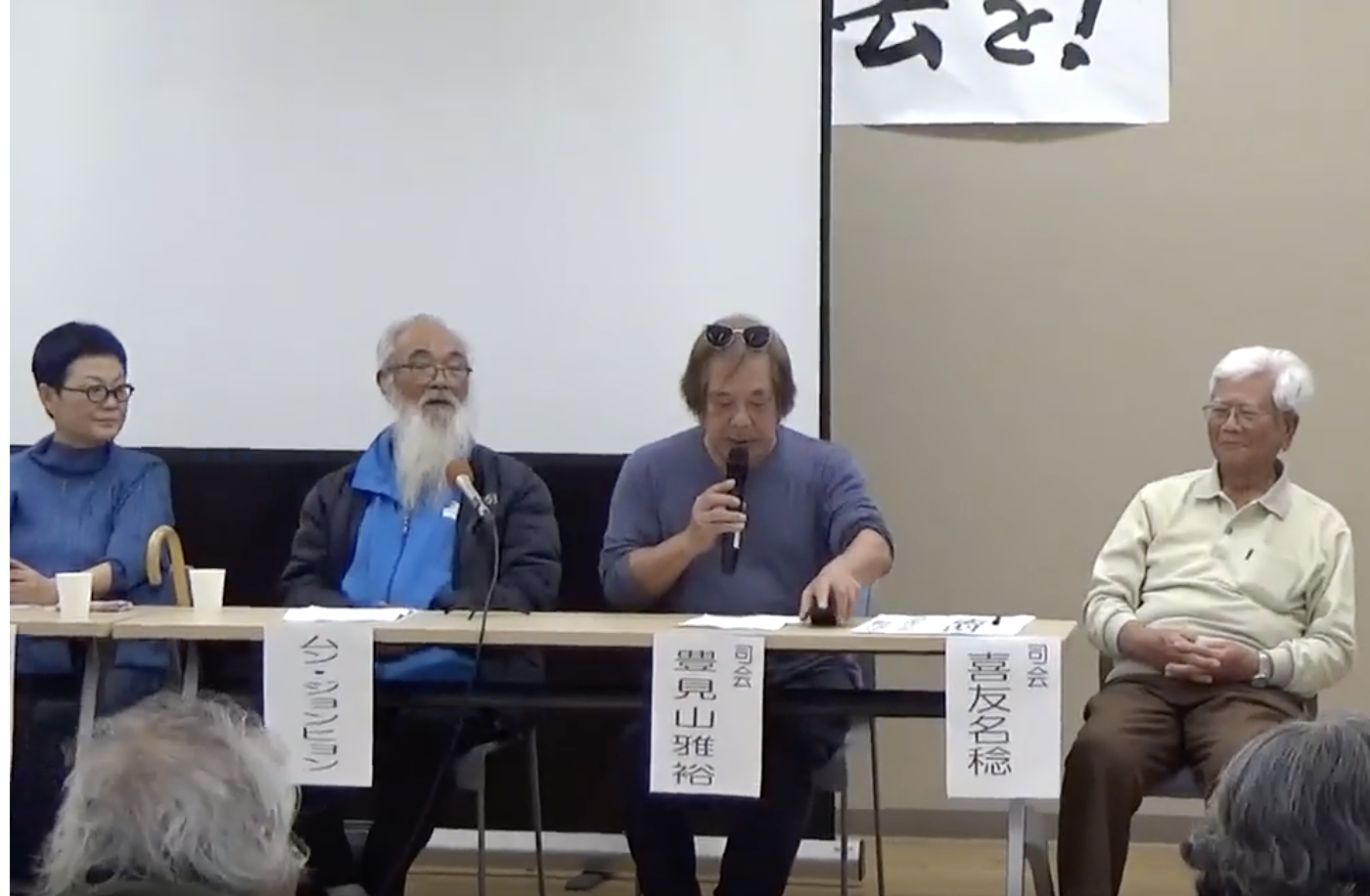 Event: “Now More than Ever, It Is Time To Remove All the Military Bases!” (Ima koso subete no gunji kichi wo tekkyo saseyou!

On this day, the 10th of February, I attended a symposium that took place at the Yomitan Village Locality Promotion Center, which is part of a large complex of buildings that include the Yomitan Village Office (a kind of city hall) and civic facilities. A large part of Yomitan Village today is still used as US military bases, but the site of the land that the Center is on, as well as the Village Office (i.e., city hall), a baseball field, and other community facilities, used to be housing for the families of US troops. Yomitan was the first part of Okinawa Island at which Allied Forces landed during the Pacific War as one major stage in the intense Battle of Okinawa. Thus the return of this land to the people of Yomitan must have been a special victory. (My summary of Yomitan, like the summaries below, is not at all comprehensive).

Indeed, this event was very timely, held approximately two weeks before the second summit between Donald Trump and Kim Jong-un, on February 27th and 28th in Hanoi, Vietnam. March 1st will be the centennial celebration of Korea’s “March 1st Movement” for independence, remembered on both sides of the 38th Parallel or “Demilitarized” Zone (i.e., DMZ), a massacre committed by the Empire of Japan against Koreans in response to widespread demands for independence that began on 1 March 1919.

Soon after that will be April 3rd, the day remembered in Northeast Asia as the “Jeju April 3 Incident” (濟州四三事件, pronounced as Jeju sasam sageon in Korean [?] and Jeju yonsan jiken in Japanese)—a day that will live in infamy. Tens of thousands of people were killed “under the direct leadership of the American Military Government” at a time when Korea was occupied by the US. Research is still being conducted on this US atrocity, but initial research indicates that 10% or more of the population of Jeju Island were massacred due to their opposition to the US-imposed dictatorship of Syngman Rhee.

People throughout Japan, and especially in Okinawa, will also be remembering this spring the Battle of Okinawa that lasted from April 1st until June 22nd, 1945. It is remembered as “Okinawa Memorial Day (慰霊の日 Irei no Hi, literally “the day to console the dead”) and is a public holiday observed in Okinawa Prefecture on June 23rd every year. One quarter of a million lives were lost, including over ten thousand American soldiers and several tens of thousands of Japanese soldiers. One third of the people of Okinawa died. The vast majority of the population was left homeless. It was the most traumatic event in Okinawan history.

Hopes are high for peace in Northeast Asia ahead of the Summit in Hanoi.

Mr. YAMAUCHI Tokushin, born in 1935 and native to Yomitan Village, an area of Okinawa Island, was the mayor of Yomitan, a town/village with a population of 35,000 people, for over two decades, and was later a member of the House of Councillors in the Diet (national legislature, like the US Congress) for one term. He has contributed much to building solidarity between Okinawans and Koreans.

Mr. Yamauchi explained that the government of the Empire of Japan annexed Okinawa using the power of the police and the military, just as it annexed Korea during the Meiji period (1868-1912), and in that way the government of Japan planted the seeds of suffering of both Okinawans and Koreans. Speaking as someone who is at present a citizen of Japan, he expressed remorse for the ways in which the Empire of Japan hurt Korea.

Around 3:30 he comments on the Candlelight Revolution of South Korea. After saying that he was honored to have the South Korean Catholic priest Moon Jeong-hyun participating in the symposium, he extends the following greeting to the visitors from Korea: “I want to welcome you and express my deep respect for the agents of the Candlelight Revolution of South Korea, with your power, your sense of justice, and your passion for democracy.”

As soon as he spoke those words, and began to speak the following words, Moon Jeong-hyun spontaneously stood up, walked to him and shook his hand, amid much applause: “Let’s both stay strong so that someday I can say to you, ‘Okinawa won.’ We will win the struggle in Henoko without fail.”

He demands that the peace constitution of Japan be respected [with its Article 9]. He remembers that the very land on which he and all of us, the participants in the symposium, were sitting on, was once a US military base, holding out the promise of further withdrawal of bases and return of land.

He said that every year on the Fourth of July, on US Independence Day, a representative of Yomitan Village would deliver flowers to officials on a base in Yomitan. In addition, he himself wrote many letters to US presidents. Once he received a response. That was from former US president Jimmy Carter. He emphasized the need to understand the feelings (?) or dreams (?) of the enemy, for example, the Fourth of July. And he tied in that American dream of independence and freedom with the aspirations of Okinawans and Koreans. I did not actually hear the word “self-determination,” but repeating these words such as “independence” and “the people” (minshu in Japanese) in the context of our Fourth of July indicated that that was the thrust of his conclusion. As will be seen below, one can hear echoes of that dream of self-determination—both peace and democracy—in the speech of the Catholic priest Moon Jeong-hyun. Giving this speech ahead of the 100th anniversary of the Korean independence movement day (of the March 1st Movement), he demonstrated his awareness and appreciation of how ending the US empire’s domination of the region through its empire of bases must be on the minds of Koreans just as it is on the minds of Okinawans at this moment, when full-scale violence is being done to an ecosystem that is struggling for its survival (the coral along with 200 endangered species and the dugong or “sea cow”.

Moon Jeong-hyun, who is known by many as “Father Moon,” is the 2012 recipient of the Gwangju Prize for Human Rights, renowned for his long life of work for democracy and peace in South Korea. He appears in John Pilger’s 2016 film “The Coming War on China.”

The following is just my rough summary of sections of his speech that I think might interest English speakers, not a translation, from part of Moon Jeong-hyun’s speech:

This is my third time in Okinawa, but this time feels somewhat special. Many people are very interested in what has happened in Korea, especially with the Candlelight Revolution. Nobody imagined that this would happen. It is amazing that now Park Geun-hye and Lee Myung-bak (two former presidents of South Korea) are in prison. It is great that Okinawans are taking an interest. Moon Jae-in has become president. Did he actually meet Kim Jong-un at Panmunjom, or did I just imagine that? Donald Trump and Kim Jong-un have met in Singapore. Someday people will even be able to take the train to Europe from South Korea.

Amazing progress has been made that we applaud. But Prime Minister Shinzo Abe and President Moon Jae-in are just puppets of the US government. In fact, even more progress could be made, but the US government is slowing the process down.

In the following clip, Moon Jeong-hyun talks about the huge Camp Humphreys base that is not far from Seoul and the Jeju Civilian-Military Complex Port, or “Jeju Naval Base” for short, in Gangjeong village on Jeju Island.

I think that the [Camp Humphreys] base in Pyeongtaek is the largest US foreign base . Due to the expansion of that base, a large number of people have been imprisoned and battles have been fought in the courts. I live in Gangjeong Village on Jeju Island. We have struggled against the building of a naval base there. Unfortunately, it has been completed.

Then Moon Jeong-hyun touches on the very important question of what will happen to Korea after reunification, assuming that it indeed happens.

This is the third time I have been to Okinawa and many know me here now. When I came here, many people said to me they met me here or there. When I was in Henoko, I heard that many young Koreans have passed through Henoko. Many people from the Henoko [struggle] have been to Korea.

It’s not easy. We did not think that we could unseat Park Geun-hye. I am a Catholic priest and I am religious. All of you are surprised. So are we. I said this before to you, didn’t I? We didn’t think we could do it. Things that were once unimaginable have happened. Many people think that we will never be able to drive away the US military, but I promise you that we can and will with time! We cannot drive away Abe or Moon Jae-in, but if you cooperate with the people I met in the Candlelight Revolution, we can drive away the US military bases.

Speakers during the first session:

On the far left, Im Yungyon, Executive Director of the Pyontek Peace Center

On the far right, the Emcee, Kiyuna Minoru

Speakers during the second session:

Shimizu Hayako, who spoke about the militarization of Miyako Island, one of the larger islands in Okinawa Prefecture

Yamauchi Tokushin, a former legislator in the House of Councilors in the National Diet (Japan’s parliament)

Tanaka Kouei, a member of the town council of Kadena Town (in Nakagami District, Okinawa Prefecture)

Towards the end of the second session, I stood up and asked one question addressed mainly to YAMAUCHI Tokushin and to MOON Jeong-hyun:  “What would you have me tell Americans?” The following was their answer.

The response of YAMAUCHI Tokushin:  It is useless to tell one individual American, but through you I would like to tell President Trump the following:  Beginning with the Kadena Air Base, I would like the US to close all the bases in Okinawa as soon as possible.

The response of MOON Jeong-hyun:  There is a song. The song is about how we pushed out the Japanese and then the Americans came in. As “Hinomaru” (the national flag of Japan) was taken down, the “Stars and Stripes” went up. Both the Japanese and American militaries invaded Korea. In that sense they are the same—they’re no good. Nevertheless, there are some Americans with whom I am good friends and I am close to. The same is true of Japanese. The American and Japanese governments are the same though. Korea was invaded and occupied by Japan for 36 years, and after that the US invaded Korea, and occupied it for more than 70 years. That is the truth. You cannot hide the truth. The truth will be revealed. The truth will definitely win. Compared to Japan and America, South Korea is very small. But we have struggled to bring out the truth. There are many other things I could say, but since time is limited, I will leave it at that.

The response of the young woman activist from Jeju:  Please stop manipulating and killing people. We don’t want to fight wars for the United States anymore. Quickly shrink the US military in our country and focus on the problems of the environment and of death. You must not waste time killing people.