Henoko: The Latest Sacrifice Zone of the US-Japan Military Alliance 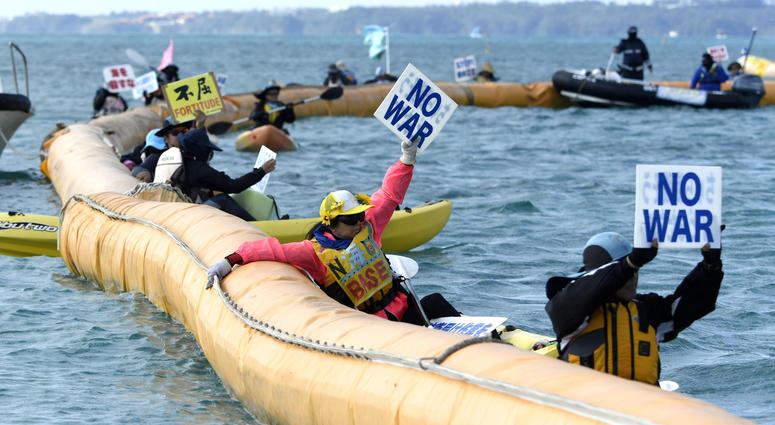 Protesters on canoes display placard as construction workers dumped a truckload of sediment on the ground and bulldozed it into the sea at Henoko on Okinawa’s east coast to build a runway for a Marine Corps base, Friday, Dec. 14, 2018. Japan’s central government started main reclamation work Friday at a disputed U.S. military base relocation site on the southern island of Okinawa despite fierce local opposition. (Koji Harada/Kyodo News via AP)

“The capacity to write off large segments of humanity as Other, as disposable, as less than human and therefore worthy of sacrifice, has been utterly integral to the very fact of powering our economies with fossil fuels, and it always has been. Fossilized energy cannot exist, never has been able to exist, without sacrificial places and sacrificial people. – Naomi Klein, “Naomi Klein: Imagining a Future without Sacrifice Zones”, Othering and Belonging Conference, 2015

Last year Business Insider explained that “without coral reefs, there could be a rippling ecosystem collapse in the oceans, with devastating effects on the planet.” And in 2012 Roger Bradbury, an ecologist at Australian National University told us that the coral reefs are dying; that the International Coral Reef Symposium called “on all governments to ensure the future of coral reefs;” that “hundreds of millions of people in poor, tropical countries like Indonesia and the Philippines who depend on coral reefs for food” will suffer; that the tourism industry of “rich countries with coral reefs, like the United States, Australia and Japan” are threatened; that Mexico and Thailand’s “food security and tourism industries” will be “badly damaged;” and that there will be a huge loss of biodiversity (New York Times). By now there is a consensus about what is killing the coral:  warming sea-surface temperatures, ocean acidification, pollution, overfishing, and maybe even invasive species and coastal development.

But there is one other coral killer. It is one of the world’s primary environment killers, and it is endangering the survival of our very own species. I write of the US military and, in this example, its assault on the coral of Oura Bay in Okinawa, Japan. The US war machine effect on the coral there is especially deadly because it has at its side another killer, the government of Japan, who are notorious now for ocean killing—for assaulting whales, dolphins, and fish, not to mention those people unfortunate enough to live near the ocean and subsist on fish or whose livelihoods once depended on fishing. (That government helped build nuclear power plants near tsunami-prone coastal areas, and even backed up Tokyo Electric Power Company or TEPCO after the Fukushima Daiichi disaster that has spewed highly radioactive water into the Pacific Ocean).

With the new Henoko base construction, in which they are expanding Camp Schwab into Oura Bay, Tokyo is gifting Washington another huge US Marine Corps airbase—stealing from the poor and giving to the rich. (Camp Schwab is located in the Henoko district of Nago City). On one side stand powerful forces—Tokyo, Washington, and the various companies that are profiting from the base construction—while on the other side stand the people of Uchinā. Uchinā is the name for “Okinawa” in Uchināguchi, the language that is native to Okinawa Island. The Battle of Okinawa killed one-third of the Uchinā people, left most of them homeless, and devastated their homeland, so needless to say, they do not want that to happen again. Uchinā people have struggled for three-quarters of a century to demilitarize their land and prevent these two powerful states, the US and Japan, from turning their land into a battlefield once more. They have struggled, with some success, virtually on their own, for decades. The population of Japan as a whole is roughly 100 times the population of Okinawa Prefecture. By comparison, Korea is roughly 50 times the population of Okinawa. When it has been difficult even for Koreans to maintain their independence from Tokyo and Washington, imagine what the Uchinā people have been up against.

Uchināguchi is the native language of Okinawa Island and is not mutually intelligible with the language of Tokyo. The Uchinā people enjoyed independence as a separate kingdom until the 17th century and even after that they were able to maintain semi-independence from Japan until 1874. Twenty percent of the total area of Okinawa Island is now occupied by US bases. The rest of it is ruled by Tokyo. Okinawa Island is only one of many islands in Okinawa Prefecture that have military installations, of either the US military or Japan’s “Self-defense” Forces (SDF). Miyako Island and Ishigaki Island are two of the other major islands that make up Okinawa Prefecture. Three-quarters of the 50,000 US military personnel who are stationed in Japan live in Okinawa Prefecture.

Washington and Tokyo want to use Uchinā again as what I call a “sacrifice zone,” borrowing Naomi Klein’s term. For the last for 20 years the Uchinā people have successfully held their ground against Tokyo’s efforts to construct a base there. They have blocked, temporarily stopped, or slowed it down over and over again. But on the 14th of December, last month, Tokyo managed to begin to actually injure the coral in Henoko, on Oura Bay. (You can watch the outrageous killing of the coral yourself at the “Stand With Okinawa” website:  standwithokinawa.net/2018/12/14/dec14news/ ). They dumped dirt and crushed rock on top of it. Fortunately for everyone, anti-base activists did not back down. For that we should be thankful. The coral is still alive. As the political scientist and activist C. Douglas Lummis pointed out the other day, “It Ain’t Over ‘Till It’s Over.” (His latest article is entitled, “It Ain’t Over ‘Till It’s Over: Reflections on the Okinawan Anti-Base Resistance”, The Asia-Pacific Journal: Japan Focus, 1 January 2019). He knows the Uchinā people and their postwar history as deeply as anyone, and he knows their strength.

The vast majority of Uchinā people are opposed to the Henoko base construction; 55% of Japanese are opposed. Allied with the Uchinā people are thousands of socially-conscious, active Japanese citizens and hundreds of good world citizens from outside Japan. This is the tiny portion of humanity who understand what is at stake. Humanity is now in the midst of a “global extinction event,” in which the coral in seas around the globe are about to go extinct. Coral are a type of marine invertebrate. The marine invertebrates are the most ancient type of animal on our planet. The extinction of this entire ecosystem is in the cards. Henoko should be a nature preserve.

“Coral reefs,” then, are the “rainforests of the sea,” but the Henoko coral reef may be on its last legs. We decide whether it lives or dies. The survival of the dugong (a kind of “sea cow”) and 200 other species may depend on the survival of the coral reef in Henoko. But the administration of Prime Minister Shinzo Abe is now, in effect, commanding people to kill it—this precious healthy coral that is only beginning to suffer from the coral bleaching that plagues coral in other regions of the world. The administration coldly put on its nature-killer mask and began the landfill work on the 14th of December—probably an act that violates Japanese law—hoping to break the will of the resistance. They are trying to build on a sea bottom that has the “resilience of mayonnaise,” so this project is going to cost far more than originally projected if the engineers can actually build it and if the legal hurdles can be overcome.  As Gavan McCormack and Satoko Norimatsu have written in their book Resistant Islands (2012), building a military base in Henoko is akin to building one in the Grand Canyon. Why build one there anyway?

Modern imperialism, in a word. As Japan stepped out of its centuries-long seclusion and into the dog-eat-dog world of Western colonialism in the late nineteenth century, the government of Japan, too, engaged in Western-style imperialism—against the people of Uchinā in the south, the Ainu in the north, and other neighbors, such as the people of Korea and China. Resisting colonization by the West and becoming a Western-style empire itself (completing one of the tasks of so-called “modernization”) meant that it had to be hell-bent on industrial expansion at any cost—from its wary birth in 1868 until its disorienting defeat in 1945.

In the postwar period, Japan transitioned into “Japan Inc.” This new power center represented a duopoly of the national government in Tokyo on the one hand and Japanese big business on the other. The two bonded together to form one policy-making body that continued that same hell-bent industrialization that Japanese elites had begun in the late nineteenth century, minus the overtly militarist component. As much as in the US, maybe even more so, profits come before people in Japan, Inc. And one of the main sources of profits has been the Department of Killing, the Pentagon. The destructive behavior we see in Henoko today is pathological from a human survival perspective but completely in line with Tokyo and Washington’s overall industrializing and geopolitical goals.

The destruction being done to our planet by the war machines of the US, Japan, and other countries is pushing the possibility of human survival past the point of no return, just like the burning of fossil fuels that Klein has explained so well. Henoko is a classic example of Our Military turning a nature preserve into a sacrifice zone. This largely unreported crime of killing off one of the last healthy coral reefs could send shock waves throughout the world’s ecosystems. The people of Uchinā and those who stand with them are giving us some hope though, through their small but tenacious voices that are calling out to the world, “Stop the construction of the new base in Henoko!”

Klein said, “I would argue, though it is unspoken, that people are also ‘overburden’ when they get in the way of money on those territories.” (“Overburden” is the material that lies above an area targeted for exploitation, such as the rocks, soil, and ecosystem that get in the way of strip mining—one type of resource extraction). Klein goes on to say that when the people who are “overburden” in this sense have rights, that overburden really becomes a problem for extractivists. Thinking in these terms about the life and death struggle underway now in Henoko, Okinawa, Japan, one notices that in an objective sense, yes, Uchinā people function as a kind of “overburden” and they do have rights just as other citizens in Japan do, so they are going to continue to get in the way, figuratively and even literally, as they put their bodies on the road blocking the trucks doing the landfill work. How about we all get in the way with them, figuratively, ideologically, literally even, in whatever way we can, for ourselves and our planet’s future? Let’s be the overburden that blocks the extractivism of the US-Japan war machine. Let’s be the “life that gets in the way of money” that Klein talked about, first by slowing down the “spreading of the sacrifice zone” that is “hallowing out communities” and “threatening life-support systems of the planet itself” so that we and the planet may yet live.

Many thanks to Stephen Brivati for comments, suggestions, and editing.

Joseph Essertier is an associate professor at the Nagoya Institute of Technology in Japan and the Coordinator of Japan for a World BEYOND War.