(This is section 46 of the World Beyond War white paper A Global Security System: An Alternative to War. Continue to preceding | following section.) 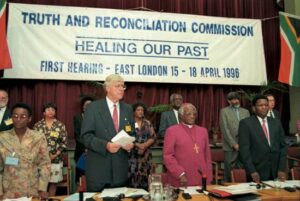 The evolving situation will always require the consideration of new treaties. Three that should be taken up immediately are:

New treaties are necessary to deal with global climate shift and its consequences, in particular a treaty governing the emission of all greenhouse gases that includes assistance for the developing nations.

Pave the Way for Climate Refugees

A related but separate treaty will need to deal with the rights of climate refugees to migrate both internally and internationally. The United Nations Convention on Refugees legally obligates signatories to take in refugees. This provision requires compliance but given the overwhelming numbers that will be involved, it needs to include provisions for assistance if major conflicts are to be avoided. This assistance could be part of a Global Marshall Plan as described below.

When interstate or civil war occurs in spite of the many barriers the Alternative Global Security System throws up, the various mechanisms outlined above will work quickly to bring an end to overt hostilities, restoring order. Following that, Truth and Reconciliation Commissions can be established. Such commissions have already worked in many situations in Ecuador, Canada, the Czech Republic, etc., and most notably in South Africa at the end of the Apartheid regime. Such commissions take the place of criminal proceedings and act to begin to restore trust so that genuine peace, rather than a simple cessation of hostilities, can actually commence. Their function is to establish the facts of past wrongdoing by all actors, both the injured and the perpetrators (who may confess in return for clemency) in order to prevent any historical revisionism and to remove any causes for a new outbreak of violence motivated by revenge.