The Montréal for a World BEYOND War / Montréal pour un monde sans guerre Chapter launched this week! Read this article from chapter coordinator Cym Gomery about the chapter’s first action for Remembrance/Armistice Day.

Remembrance day in Montreal, Nov. 11 2021 — On Remembrance Day, I took the subway to downtown Montréal to attend a vigil hosted by the Montréal group Échec à la guerre. Each year, the Échec people host “A vigil in memory of ALL the victims of war” to provide a counterpoint to the Remembrance Day celebrations, which celebrate only the soldiers who fought on our side.

Both events take place at the same location, Place du Canada, a large grassy park with a huge statue in the center. I was looking forward to the vigil as a chance to connect with some fellow peace activists, and to take action for peace in a small way.

However, as I approached the site, I was dismayed to see police vehicles and personnel everywhere, and metal barriers all around the Place du Canada site and at all points of access to it, including some streets, which had been blocked to traffic. In addition, there was a plethora of military officers in full uniform, some of them stationed at various points along the perimeter of the barrier. I have never seen such a military presence in the streets of Montreal. I asked one of them about the barriers, and he said something about COVID restrictions. Inside these barriers, I could see a cluster of people, probably veterans and their families, and on the surrounding streets, armed military types in full parade regalia, a huge firearm, and more police. There were also at least four gigantic tanks on rue de la Cathédrale—an unnecessary means of transportation in this city of cyclists, in what could only be intended to reinforce the already overdone display of military muscle. 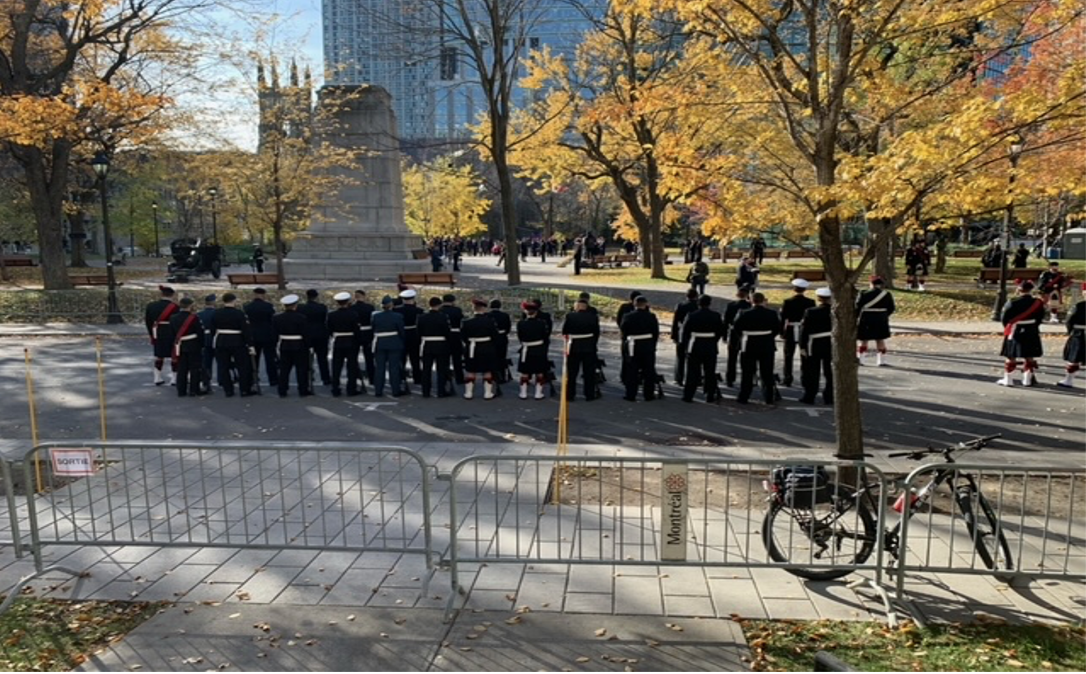 A vast perimeter was erected around the site

I found my group, identifiable by their white poppies, eventually, and we made our way to the lawn in front of the Catholic church that overlooks Place du Canada. Not a simple feat! Even the grounds of the church had been blocked off, but we managed to get to the front lawn by passing through the church itself.

Once assembled at the site, we unfurled our banner and stood far removed from the ceremonies taking place in Place du Canada. 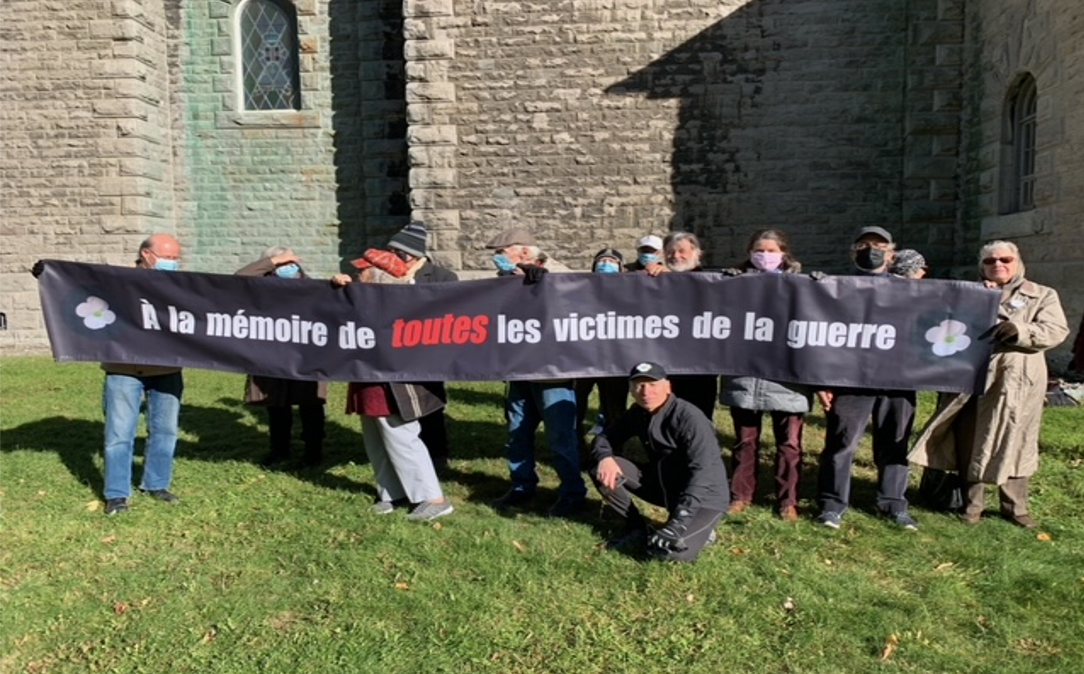 Some of the Échec à la guerre participants holding their sign

I found the military spectacle profoundly misguided, but it was about to get worse…

Suddenly, a harsh male voice shouted an unintelligible command, and a tremendous cannon blast reverberated all around us. It seemed the very ground at my feet shook: the sound seemed to travel through my body in such a way that my legs felt weak, my ears rang, and I felt cascade of emotions–fear, sadness, indignation, righteous anger. The gun shots were repeated every few minutes (I later learned there were 21 in all), and each time it was the same. Birds, probably pigeons, wheeled high in the sky, and with each explosion, there seemed to be fewer of them, further away.

Many thoughts chased themselves through my head:

This experience made me realize how fragile a thing is peace. The sound of weapon fire in particular awakened in me fear, and a human need that I rarely consider, the need for safety–the second most basic set of needs in Maslow’s hierarchy (after physiological needs like food and water). It was truly sobering to think that this sound —and much worse — is something that people in Yemen and in Syria, for example, have to live with more or less constantly. And militarism, particularly nuclear weapons, is a constant threat to all life on Earth. The nuclear cold war, perpetuated by NATO states, is like a big dark cloud hanging over humanity and nature. However, even if a nuclear bomb is never detonated, the existence of a military means so many other activities: F-35 bombers that use as much fuel and emissions as 1900 cars, effectively catapulting any chance of achieving COP26 emissions reduction goals, military spending that robs us of the chance to address basic human problems like poverty, submarines that torture whales through sonar, military bases that encroach on pristine ecosystems as in Sinjajevina, a militaristic culture that is fed by misogyny, anti-black, anti-indigenous and anti-Muslim racism, antisemitism, sinophobia, and so many other expressions of hatred rooted in the cowardly desire for domination and a feeling of superiority.

My takeaway from this experience:

Peacemakers everywhere: Please don’t give up! The world needs your positive energy and courage more now than at any time in the history of human existence. 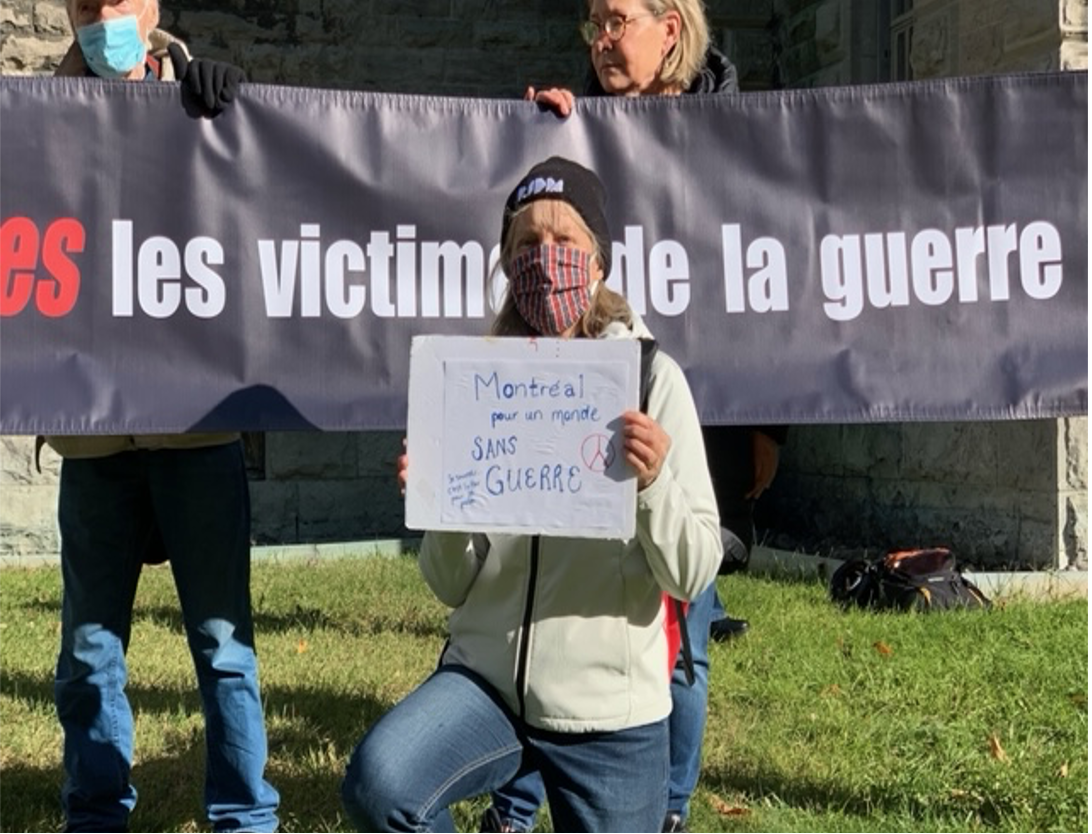