“Remembering” What Is Yet To Be (Remembrance Day 2022) 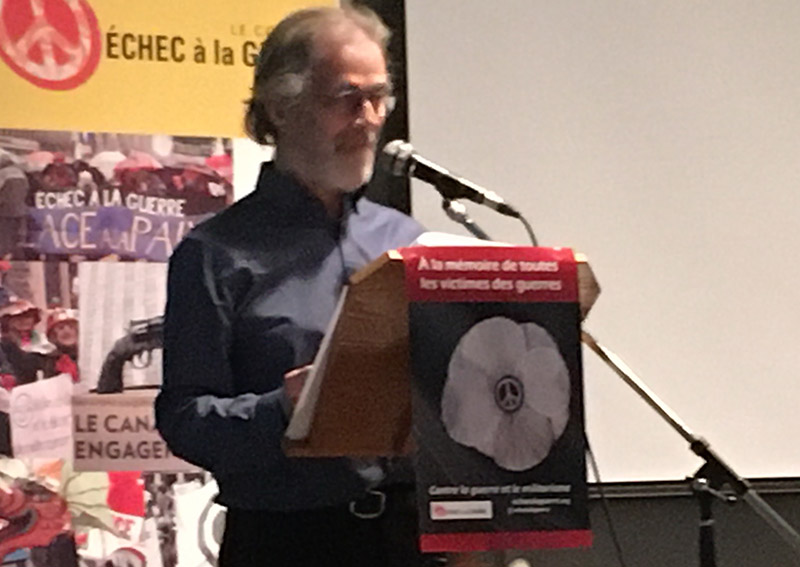 On November 11th 2022, Montreal peace activists gathered at the community center Maison Bellarmin for a celebration of peace organized by Collectif échec à la guerre, which is a coalition of Québec-based peace organizations, including Montréal for a World BEYOND War.

This year, the alternative Remembrance Day ceremony adopted a radically new venue and format. In the past, Montreal peace activists have performed a peace vigil on the periphery of the traditional Remembrance Day celebrations. For 2022, however, Échec à la guerre decided to distance itself physically from the cannons and tanks, and to express our yearning for peace in a refreshing and creative way.

The celebration kicked off with a choir performance outside, by Les chorales Allez Chante! The crowd then moved inside the community center. I took a seat beside fellow Montreal chapter peace activist and Raging Granny Marjorie Moffatt. Jean Baillargeon welcomed the audience, and we listened to statements and presentations from various people in the Montréal peace community.

Next, to a backdrop of melancholy music by Estonian composer Arvo Pärt, Zoe Laporte did a shadowbox play. Ghostly images backlit by flickering lights suggested the beginning of life on Earth, taking us through the age of dinosaurs, followed by images of humans, successive wars, and in the end, an eerie and bleak landscape of nuclear winter—suggesting that humans would, like the dinosaurs, go extinct, but at their own hands–what a tragic ending to the Anthropocene!

In tandem with the various performances, the artist Jacques Goldstyn (alias Boris), created a cartoon with the caption, ‘It will be a beautiful day, the day that cannon dealers are hungry, cold, and afraid.’ His cartoon turns the usual militaristic narrative on its head–showing a joyous procession of people marching with a dove overhead, while in the foreground, a down-and-out fellow, presumably a former arms dealer, looks on. 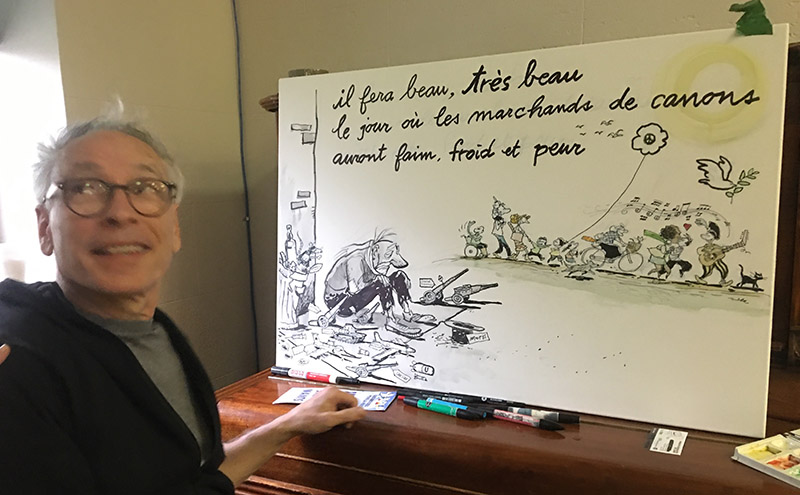 There were other short speeches as well—bringing home the dire state of the world at this moment in time—yet because we were hearing these statements in a context of solidarity and activism, I was able to feel more hopeful than I typically feel when reading the newspaper!

The final performance of the celebration was folk singer Domlebo, himself a former president of Les artistes pour la paix, and one-time member of Les Cowboys Fringants. One of the songs he performed, introduced as ‘The greatest peace song of all time,’ was Quand les gens vivront l’amour, written by Québecois Raymond Lévesque in 1956. This popular folk song has been recorded by numerous artists, including Félix Leclerc. It is written from the perspective of a peace activist who is imagining his legacy, a future world of peace, ‘when people live with love’.

‘Perhaps they will think one day,
Of us, now dead, my brother.
We who in the bad old days of hatred and of war
Sought peace, sought the love
That they now know, my brother.’

The lyrics are wistful–that it took so long for us to wake up–but also suggest faith that peace is possible. As I think back on that moment, when I and about seventy fellow activists listening to Domlebo, embarked on a bittersweet flight of fancy, I realize that this song exemplifies the attitude that makes peace activists so fundamentally different from traditionalists.

Let’s face it: Remembrance Day ceremonies happening all over the world on November 11th are celebrations of war. These ceremonies often include a recitation of the poem In Flanders Fields, a poem that imagines soldiers killed in battle, calling from their graves to the living, pleading with them to ‘Take up the quarrel with the foe.’ In Flanders Fields is a call to war, in the spirit of vengence. And we repeat it, in churches, in outdoor ceremonies and in political venues, year after year. No wonder humans seem stuck in a cycle of violence!

After the peace ceremony, I was pleased to get to chat with Montreal for a World BEYOND War chapter member and friend, Louise Royer and her husband Stone, and to meet local activist Maria Worton. 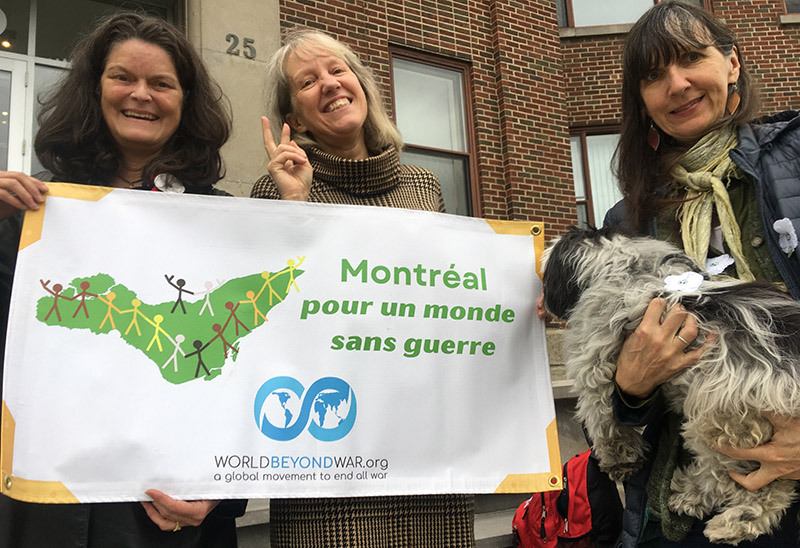 Here are Louise Royer, WBW Mtl Coordinator Cym Gomery, and Maria Worton together outside the Centre Bellarmin. Note that even Maria’s dog was wearing a white poppy!