13 People Cited at Trident Nuclear Submarine Base at Bangor, Marking the 77th Anniversary of Hiroshima and Nagasaki Atomic Bombings 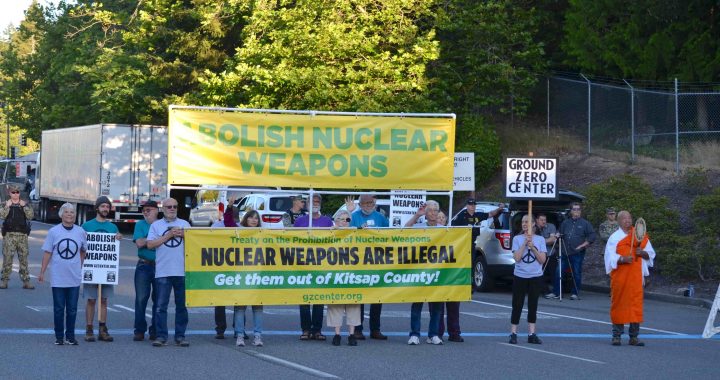 Naval Base Kitsap-Bangor is homeport to the largest concentration of deployed nuclear warheads in the U.S. The nuclear warheads are deployed on Trident D-5 missiles on SSBN submarines and are stored in an underground nuclear weapons storage facility on the base.

Activists gathered early Monday morning on August 8th at the the Ground Zero Center for Nonviolent Action in Poulsbo to remember the atomic bombings of Hiroshima and Nagasaki 77 years ago and to call for the abolition of nuclear weapons. Reverend Crystal Zerfoss of the Kitsap Unitarian Universalist Fellowship (UUF) led the group in a blessing before they walked to the Main Gate of Naval Base Kitsap-Bangor carrying banners, signs, and flags early Monday morning when base personnel were reporting for work.

At the gate, while people held a peaceful vigil on the roadside, approximately two dozen activists entered the roadway blocking the road to the base, and performed in a flash mob dance to the song “War (What is it good for?)” sung by Motown singer Edwin Starr.  Video of the flash mob is at https://youtu.be/Lk92BaMfV84.

When the dance was completed, some people remained on the roadway holding two large banners that read “ABOLISH NUCLEAR WEAPONS” and “NUCLEAR WEAPONS ARE ILLEGAL: Get them out of Kitsap County” respectively. Eleven activists were removed from the roadway by Washington State Patrol Officers and cited for “Pedestrian on roadway illegally”. The other two activists crossed the Blue Line onto the submarine base, were detained by Naval security personnel, and cited for “Trespassing” on Federal property.

Those cited by the State Patrol are: Sue Ablao of Bremerton; Philip Davis of Bremerton; Susan Delaney of Bothell; Sean Foley of Seattle; Anne Hall of Lopez Island; David Hall of Lopez Island; Elizabeth Murray of Escondido, California; Gilberto Perez of Bainbridge Island; George Rodkey of Tacoma; Michael Siptroth of Belfair; and Caroline Wildflower of Port Townsend. The two activists cited by the Navy are: Macknight Johnson of Silverdale; and Victor White of Oceanside, California.

“War (What is it good for?)” was an anti-Vietnam War protest song, written by Norman Whitfield and recorded by Whitfield and the Temptations in 1969. It was re-recorded by Starr and released as a single in 1970. War became one of the most successful protest songs of the 20th century.

The morning vigil, flash mob and nonviolent direct action were the culmination of a two-day remembrance of the atomic bombings of Hiroshima and Nagasaki at Ground Zero Center for Nonviolent Action. Mary and Jim Aldridge joined the remembrance, representing their father, Robert C. Aldridge, peacemaker and guiding inspiration for Ground Zero Center and Trident resistance who passed away on April 29th. Mary Aldridge spoke about her father’s last book, “The Goodness Field” and his work on the creation of a Global Constructive Program leading to a world with justice, sustainability and peace for all of humanity.

The annual Pacific Northwest Interfaith Peace Walk ended at the Ground Zero Center to participate in the remembrance and Monday’s vigil and direct action.  The walk is coordinated by Rev. Senji Kanaeda of the Nipponzan Myohoji Buddhist Temple on Bainbridge Island. The Nipponzan Myohoji order was founded in 1917 by Nichidatsu Fujii, and actively engages in the peace movement worldwide by organizing walks for nuclear disarmament and human rights.

On August 1st, activists from Ground Zero Center met the U.S. Navy fleet in Seattle’s Elliott Bay in a water-based nonviolent protest against the glorification of weapons of war at the Seattle Seafair festival. There were five Peace Fleet boats on the water with 11 peace activists aboard and about 25 peace activists on Pier 62 on the Seattle waterfront at the same time. The protest was intended to highlight the unrepresented and forgotten victims of these weapons of war and to call attention to the crimes of our nation.  And because the celebration of warships in our harbor helps bring about the normalcy of modern war. This was the twenty-first year for this demonstration

The fleet arrival at Seafair is a public relations and recruiting event for the U.S. Navy.  Previous years have brought Trident nuclear submarines complete with nuclear warheads and Navy warships used to launch Tomahawk cruise missiles in the first and second Wars on Iraq and the twenty-year War on Afghanistan.  The fleet is displayed for five days in downtown Seattle at tremendous cost to taxpayers while crucial social services in education, health care, housing, and transportation are impaired for lack of funds.

On July 24th, a full-page ad was published in the newspaper of record, the Kitsap Sun, speaking to military personnel at Naval Base Kitsap-Bangor.  The ad is an appeal to Navy personnel to resist orders to launch nuclear weapons. The appeal with supporting signatures is at
https://www.gzcenter.org/wp-content/uploads/2022/07/KitSapSun_GZAppeal24JUL2022.pdf.

Refuse the order to use nuclear weapons.

Our proximity to the largest number of deployed strategic nuclear weapons puts us near a dangerous local and international threat. When citizens become aware of their role in the prospect of nuclear war, or the risk of a nuclear accident, the issue is no longer an abstraction.  Our proximity to Bangor demands a deeper response.

Remembering the atomic bomb victims of Nagasaki [and Hiroshima] is essential to preventing the use of nuclear weapons from happening again.

Regarding the Appeal to Navy Personnel, peace activists are not requesting that military personnel leave the service, but instead that they serve honorably and in accordance with the Uniform Code of Military Justice (UCMJ) and international law.

Each Trident submarine was originally equipped for 24 Trident missiles.  In 2015-2017 four missile tubes were deactivated on each submarine as a result of the New START Treaty.  Currently, each Trident submarine deploys with 20 D-5 missiles and about 90 nuclear warheads (an average of 4-5 warheads per missile).  The warheads are either the W76-1 90-kiloton or W88 455-kiloton warheads.

The Navy in early 2020 started deploying the new W76-2 low-yield warhead (approximately eight kilotons) on select ballistic submarine missiles at Bangor (following initial deployment in the Atlantic in December 2019).  The warhead was deployed to deter Russian first use of tactical nuclear weapons, dangerously creating a lower threshold for the use of U.S. strategic nuclear weapons.

The Ground Zero Center for Nonviolent Action was founded in 1977.  The center is on 3.8 acres adjoining the Trident submarine base at Bangor, Washington.  We resist all nuclear weapons, especially the Trident ballistic missile system.