World BEYOND War Is Both Pro-Peace and Anti-War 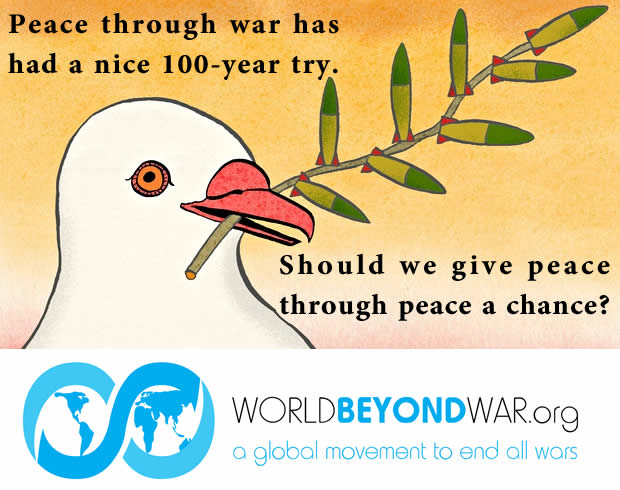 World BEYOND War strives to make clear that we are both in favor of peace and against war, engaged in striving to build peaceful systems and culture and engaged in working to demilitarize and abolish all preparations for wars.

Our book, A Global Security System: An Alternative to War, relies on three broad strategies for humanity to end war: 1) demilitarizing security, 2) managing conflicts without violence, and 3) creating a culture of peace.

We are pro-peace because simply ending current wars and eliminating weaponry would not be a lasting solution. People and structures without a different approach to the world would quickly rebuild the weaponry and launch more wars. We must replace the war system with a peace system that includes structures and cultural understanding of the rule of law, nonviolent dispute resolution, nonviolent activism, global cooperation, democratic decision making, and consensus building.

The peace we seek is a positive peace, a peace that is sustainable because it is founded on justice. Violence at its best can create only a negative peace, because its attempts to right a wrong always violate justice for someone, so that war always sows the seeds of the next war.

We are anti-war because peace cannot co-exist with war. While we are in favor of inner-peace and peaceful communication methods and all variety of things called “peace,” we use the term primarily to mean precisely a way of living that excludes war.

War is the cause of the risk of nuclear apocalypse. War is a leading cause of death, injury, and trauma. War is a leading destroyer of the natural environment, the top cause of refugee crises, a top cause of property destruction, the primary justification for government secrecy and authoritarianism, a leading driver of racism and bigotry, a major escalator of government repression and individual violence, the main impediment to global cooperation on global crises, and the diverter of trillions of dollars a year away from where funding is desperately needed to save lives. War is a crime under the Kellogg-Briand Pact, in almost every case under the United Nations Charter, and in most cases under a variety of other treaties and laws. How one could be in favor of something called peace and not be against war is bewildering.

Being against war does not involve hating people who support, believe in, or participate in war — or hating or seeking to harm anyone else. Ceasing to hate people is a key part of transitioning away from war. Every moment of working to end all war is also a moment of working to create a just and sustainable peace — and a just and fair transition from war to peace that is shaped by compassion for every single person.

The work to replace a war system with a peace system cannot be accomplished using warlike means. World BEYOND War opposes all violence in favor of creative, courageous, and strategic nonviolent action and education. The notion that being against something necessitates support for violence or cruelty is a product of the culture we are working to make obsolete.

Being in favor of peace does not mean we will bring peace to the world by placing a peace pole in the Pentagon (they already have one) or isolating ourselves to work exclusively on inner-peace. Peace-making can take many forms from the individual to the community level, from planting peace poles to meditation and community gardening to banner drops, sits-ins, and civilian-based defense. World BEYOND War’s work focuses primarily on public education and direct action organizing campaigns. We educate both about and for the abolition of war. Our educational resources are based on knowledge and research that expose the myths of war and illuminate the proven nonviolent, peaceful alternatives that can bring us authentic security. Of course, knowledge is only useful when it’s applied. Thus we also encourage citizens to reflect upon critical questions and engage in dialogue with peers toward challenging assumptions of the war system. These forms of critical, reflective learning have been well documented to support increased political efficacy and action for system change. We believe that peace in personal relationships can help transform a society only if we engage with society, and that only through dramatic changes that can make some people feel uncomfortable at first can we save human society from self-annihilation and create the world we want.