World BEYOND War Hosts Webinar On Military Impact On Guam 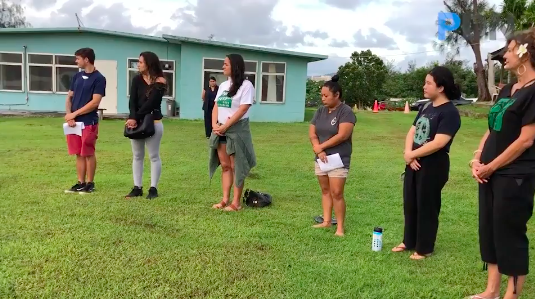 World BEYOND War hosted a webinar Thursday to talk about the impact of the U.S. military on Guam.

The webinar, “Colonialism & Contamination: Mapping U.S. Military Injustices on the Chamorro People of Guam,” is part of the group’s “Close Bases” campaign. The speakers were Sasha Davis and Leilani Rania Ganser, who talked about the negative impact of U.S. military bases on Guam.

World BEYOND War is a global nonviolent movement to end war and establish a just and sustainable peace, according to its website.

Davis has researched the impacts of U.S. military bases in the Pacific including Guam, Okinawa and Hawaii.

Ganser is a CHamoru activist raised in the United States and is the grants and impact coordinator at the Pulitzer Center on Crisis Reporting.

Ganser said her family, like many others, have been impacted by the military through generational health issues and diaspora, causing her and her family to be far away from Guam.

Davis said he has seen first hand the impacts of military bases, living near a couple of Air Force bases in Arizona.

He started to research Guam a little over 10 years ago when it became a big focal point for U.S. military strategy. Because Guam is a colony of the U.S. the military feels the island is a safer place than other places that are independent countries, he said.

The U.S. military couldn’t do as it pleased in places like the Philippines and Japan, so it sees Guam as safer place to buildup because of its colonial status, Davis said.

But many people on Guam became very upset and worked to actively block some of the U.S. military’s plans for Guam, which led to Pågat not being used as originally planned for a firing range, he said. It also has led to a slowdown in the buildup.

Ganser said the military continues to do training even as Guam remains on lockdown due to the COVID-19 pandemic.

Ganger said the disparity between the military and the local community can also be seen in how much money was spent on war reparations. She shared how her grandmother, a war survivor, was given $10,000 for her wartime suffering, but the military spends about $16,000 to recruit one new recruit.

The latest examples, of the USS Theodore Roosevelt bringing in hundreds of COV,ID-19 cases and the Rim of the Pacific Exercise still planned in Hawaii, show the military doesn’t think about the security of the people there, Davis said.

He said the military wouldn’t bring thousands of people to the U.S. mainland during the ongoing pandemic but is fine doing it in the Pacific.

Bases are not good neighbors and bring noise, environmental impacts and aren’t pleasant to be around, he said.

The complete webinar “Colonialism & Contamination: Mapping U.S. Military Injustices on the Chamorro People of Guam” is available on World BEYOND War’s YouTube channel.