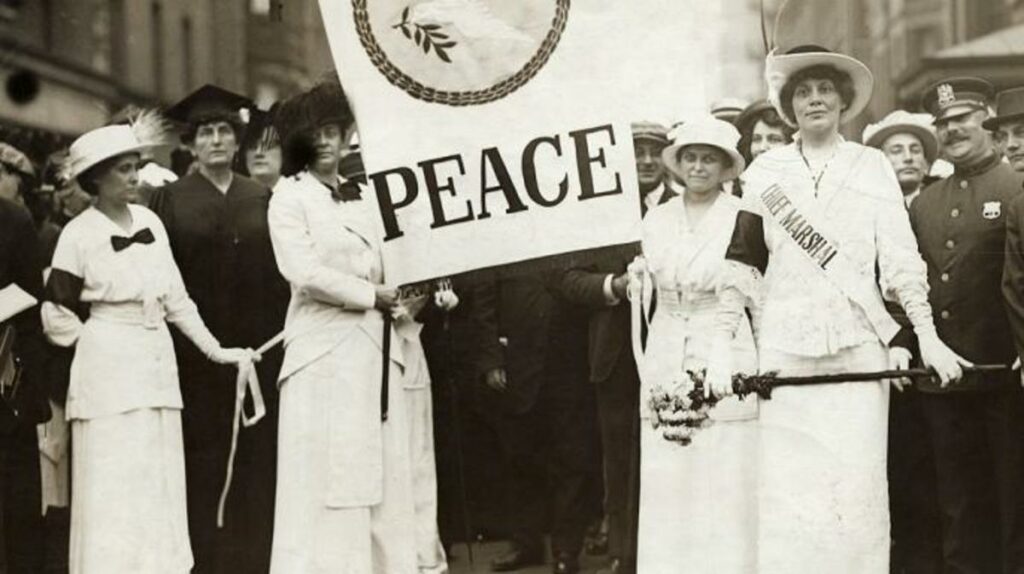 Do nations that wage more war provide those within their borders with more freedoms?

It’s often stated that correlation does not equal causation when presenting scientific data. Attempting to correlate the idea that countries that wage wars more often and thus provide those within their borders more freedoms requires some real mental gymnastics if not an Orwellian understanding of freedoms. Since the ending of the Second World War no country has been involved in more formally declared and undeclared wars, temporary occupations and covert regime changes than the United States of America. And while it can be argued that the freedoms and protections provided by the US Constitution and subsequent legal interpretations might provide its citizens some of the best protections and freedoms (for white citizens and those with financial means at least) in the world, periods of war have generally subverted and undermined those freedoms and not strengthened or expanded them.

During the First World War, voices of protest and peace were often jailed and harassed in the streets. The peace movements in the U.S. were equated as a threat to the country and labeled as communist or socialist as a justification to eradicate their organized power structures. With up to a third of the population being recent immigrants to the country, it was easy to create an “other” for retribution and even expulsion from the country with Sedition Acts in place since 1798 being a legal justification (McElroy 2002).

Jumping to the Second World War, the obvious and most visible example is the internment of 120,000 Japanese-Americans and the confiscation of their wealth, a crime by the state against its own citizens enabled by executive presidential order (Sweeting, 2004). Warfare in this instance reveals that institutionalized racism will be utilized as needed and permitted when accompanied by a compliant and tacitly approving public.

An argument can be made that the USA was not a truly a functioning democracy until the system of apartheid was ended and legal rights for all citizens were recognized in the 1960s. However, integrated public spaces and legally guaranteed rights to vote did not translate into more freedoms to assemble or speak out against militarism and foreign wars.

On the contrary, agencies such as the FBI and programs such as COINTELPRO worked to spy on and subvert civil rights groups, peace groups and anti war voices, including antiwar veterans (Democracy Now, August 4th, 1997). This peaked during the American war in Vietnam and neighboring “collateral damage” countries such as Lao PDR and Cambodia until information of the program was made public. A good example of institutional powers attempting to undermine and silence voices can be seen in how even a powerful figure such as Dr. Martin Luther King Jr. could be ostracized by mass media and more surprisingly many of his colleagues after he declared opposition to the US war on Vietnam (Smiley, 2010).

An example a few decades later following the 2003 invasion and occupation of Iraq further exemplifies that the erosions of freedom and those wishing to have a platform to challenge war face not only governmental persecution, but also harassment and censorship from corporate entities. When the lead singer of the Dixie Chicks claimed to be embarrassed that she came from the same state as the president of the United States, it unleashed a backlash that saw the band’s records physically destroyed in public actions organized by right-wing groups and their music censored by corporate radio stations (Schwartz and Fabrikant, 2003). The attempted corporate censorship even continued to a documentary movie about the Dixie Chicks plight when NBC, at the time majority owned by General Electric (GE), refused to show advertisements for the movie’s trailer (Rae, 2006). GE was and is a major defense contractor.

Since the aftermath of 9/11/2001, the invasions and occupations of Afghanistan and Iraq, along with other military activities world wide, civil liberties for U.S. citizens are constantly being eroded and challenged. The USA Patriot Act, has been greatly restricting public freedoms to organize and also has been denying many American citizens the “freedom from” systemic harassment and discrimination. Americans of Muslim faith have been the particular targets of various attacks on their civil liberties during this time period (Devereaux, 2016). Additionally, public assemblies to protest have often been restricted to so-called free speech zones; and then there is the highly secretive and invasive electronic surveillance of all our online transactions that Edward Snowden and other brave whistleblowers have exposed (Democracy Now, June 10th, 2013).

I would posit this is the greatest threat to our civil liberties and freedoms and to live in a county that is truly just and equal under that law. However, neither my family nor I have been placed in an internment camp or subsisted under menacing investigations for my affiliations or my political identity so it is an easy privilege to make such as statement. What the spying of our online footprint does is open up the possibilities for such treatment of all citizens.

Waging wars is generally antithetical to providing more liberty and freedoms within a country, but it may be in the overreach and then outrage and backlash that allows freedoms and liberties to get enshrined in new laws and new understandings. The weakening of the systems of war might open the doors for greater equality, freedom and justice; but wars themselves are not in any form creating new freedoms in any normal sense of the word. Warfare and the institutions that buttress and benefit from wars, by nature, attempt to restrict challenges to their positions of power. If citizens of a country do not restrict those institutions that are eager to wage war, then their own freedoms and liberties will be restricted. This, I believe, is a global phenomenon.

McElroy, W. (2002). World War I and the suppression of dissent. Independent Institute.
http://www.independent.org/news/article.asp?id=1207

Kirk Johnson is a student in World BEYOND War’s current online course War Abolition 101, for which this essay was written.