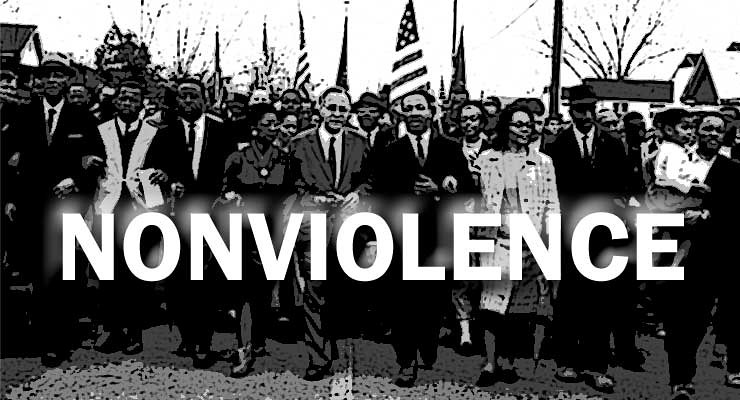 Throughout history, people facing occupation have tapped into the power of nonviolent struggle to thwart their invaders.

As with so many around the world, including thousands of brave Russians protesting against their country’s brutal invasion of neighboring Ukraine, I’m aware of the inadequate resources for defending Ukraine’s independence and wish for democracy. Biden, NATO countries, and others are marshalling economic power, but it seems not to be enough.

Granted, sending soldiers in would only make it worse. But what if there’s an untapped resource for wielding power that’s hardly being considered at all? What if the resource situation is something like this: There’s a village that for centuries has relied on a stream, and because of climate change it is now drying up. Given existing financial resources, the village is too far from the river to build a pipeline, and the village faces its end. What no one had noticed was a tiny spring in a ravine behind the cemetery, which — with some well-digging equipment — could become an abundant source of water and save the village?

At first glance that was the situation of Czechoslovakia on August 20, 1968, when the Soviet Union moved to re-assert its domination — Czech military power couldn’t save it. The country’s leader, Alexander Dubcek, locked his soldiers in their barracks to prevent a futile set of skirmishes that could only result in wounded and killed. As the troops of the Warsaw Pact marched into his country, he wrote instructions to his diplomats at the U.N. to make a case there, and used the midnight hours to prepare himself for arrest and the fate that awaited him in Moscow.

However, unnoticed by Dubcek, or foreign reporters or the invaders, there was the equivalent of a water source in the ravine behind the cemetery. What tapped it was the previous months of vibrant political expression by a growing movement of dissenters determined to create a new kind of social order: “socialism with a human face.” Large numbers of Czechs and Slovaks were already in motion before the invasion, acting together as they excitedly developed a new vision.

Their momentum served them well when the invasion began, and they improvised brilliantly. On Aug. 21, there was a brief standstill in Prague reportedly observed by hundreds of thousands. Airport officials at Ruzyno refused to supply Soviet planes with fuel. At a number of places, crowds sat in the path of oncoming tanks; in one village, citizens formed a human chain across a bridge over the river Upa for nine hours, inducing the Russian tanks eventually to turn tail.

Swastikas were painted on tanks. Leaflets in Russian, German and Polish were distributed explaining to the invaders that they were in the wrong, and countless discussions were held between bewildered and defensive soldiers and angry Czech youths. Army units were given wrong directions, street signs and even village signs were changed, and there were refusals of cooperation and food. Clandestine radio stations broadcast advice and resistance news to the population.

On the second day of the invasion, a reported 20,000 people demonstrated in Wenceslas Square in Prague; on the third day a one-hour work stoppage left the square eerily still. On the fourth day young students and workers defied the Soviet curfew by a round-the-clock sit-down at the statue of St. Wenceslas. Nine out of 10 people on the streets of Prague were wearing Czech flags in their lapels. Whenever the Russians tried to announce something the people raised such a din that the Russians could not be heard.

Much of the energy of the resistance was spent weakening the will and increasing the confusion of the invading forces. By the third day, Soviet military authorities were putting out leaflets to their own troops with counter-arguments to those of the Czechs. The next day rotation began, with new units coming into the cities to replace Russian forces. The troops, constantly confronted but without the threat of personal injury, melted rapidly.

For the Kremlin, as well as for the Czechs and Slovaks, the stakes were high. To attain its objective of replacing the government, the Soviet Union was reportedly willing to convert Slovakia into a Soviet republic and Bohemia and Moravia into autonomous regions under Soviet control. What the Soviets overlooked, however, is that such control depends on the people’s willingness to be controlled — and that willingness was hardly to be seen.

The Kremlin was forced to compromise. Instead of arresting Dubcek and carrying out their plan, the Kremlin accepted a negotiated settlement. Both sides compromised.

For their part, the Czechs and Slovaks were brilliant nonviolent improvisers, but had no strategic plan — a plan that could bring into play their even more powerful weapons of sustained economic noncooperation, plus tapping other nonviolent tactics available. Even so, they achieved what most believed their most important goal: to continue with a Czech government rather than direct rule by the Soviets. Given the circumstances, it was in the moment a remarkable victory.

To many observers in other countries who had wondered about the potential of tapping nonviolent power for defense, August 1968 was an eye-opener. However, Czechoslovakia, wasn’t the first time real life existential threats stimulated fresh thinking about the usually-ignored power of nonviolent struggle.

Denmark and a famous military strategist

Like the ongoing search for potable water that can sustain life, the search for nonviolent power that can defend democracy attracts technologists: people who like to think about technique. Such a person was B. H. Liddell Hart, a famous British military strategist I met in 1964 at the Oxford University Conference on Civilian-Based Defense. (I was told to call him “Sir Basil.”)

Liddell Hart told us that he’d been invited by the Danish government soon after World War II to consult with them on military defense strategy. He did so, and advised them to replace their military with a nonviolent defense mounted by a trained populace.

His advice prompted me to look more closely into what the Danes actually did when militarily occupied by next-door Nazi Germany during World War II. The Danish government knew of course that violent resistance was futile and would only result in dead and despairing Danes. Instead, the spirit of resistance developed both above and below ground. The Danish king resisted with symbolic actions, riding his horse through the streets of Copenhagen to keep up morale and wearing a Jewish star when the Nazi regime stepped up its persecution of the Jews. Many people still today know about the highly successful mass Jewish escape to neutral Sweden improvised by the Danish underground.

As the occupation ground on, the Danes became increasingly aware that their country was valuable to Hitler for its economic productivity. Hitler especially counted on the Danes to build warships for him, part of his plan to invade England.

The Danes understood (don’t we all?) that when someone depends on you for something, that gives you power! So Danish workers overnight went from being arguably the most brilliant shipbuilders of their day to the most clumsy and unproductive. Tools were “accidentally” dropped into the harbor, leaks sprang “by themselves” in the ships holds, and so on. The desperate Germans were sometimes driven to tow unfinished ships from Denmark to Hamburg in order to get them finished.

As the resistance grew, strikes became more frequent, along with workers leaving factories early because “I must get back to tending my garden while there’s still some light, because my family will starve without our vegetables.”

Danes found a thousand and one ways to impede their use to the Germans. This widespread, energized creativity stood in stark contrast to the military alternative of putting up violent resistance — carried out by only a percentage of the population — which would wound and kill many and bring stark privation to nearly all.

Factoring in the role of training

Other historic cases of brilliant improvised nonviolent resistance to invasion have been examined. The Norwegians, not to be outdone by the Danes, used their time under Nazi occupation to nonviolently prevent a Nazi take-over of their school system. This was despite the specific orders from the Norwegian Nazi placed in charge of the country, Vidkun Quisling, who was backed by a German occupation army of one solder per 10 Norwegians.

Another participant I met in the Oxford conference, Wolfgang Sternstein, did his dissertation on the Ruhrkampf — the 1923 nonviolent resistance by German workers to the invasion of the coal and steel production center of the Ruhr Valley by French and Belgian troops, who were trying to seize steel production for German reparations. Wolfgang told me it was a highly effective struggle, called for by the democratic German government of that period, the Weimar Republic. It was in fact so effective that the French and Belgian governments recalled their troops because the entire Ruhr Valley went on strike. “Let them dig coal with their bayonets,” the workers said.

What strikes me as extraordinary about these and other successful cases is that the nonviolent combatants engaged in their struggle without the benefit of training. What army commander would order troops into combat without training them first?

I saw first-hand the difference it made for Northern students in the U.S. to be trained to go South to Mississippi and risk torture and death at the hands of the segregationists. The 1964 Freedom Summer considered it essential to be trained.

So, as a technique-oriented activist, I think of effective mobilization for defense requiring a thought-through strategy and solid training. Military people would agree with me. And what therefore boggles my mind is the high degree of effectiveness of nonviolent defense in these examples without benefit of either! Consider what they might have accomplished if they’d also been backed securely by strategy and training.

Why, then, wouldn’t any democratic government — not in hock to a military-industrial complex — want to seriously explore the possibilities of civilian-based defense?

George Lakey has been active in direct action campaigns for over six decades. Recently retired from Swarthmore College, he was first arrested in the civil rights movement and most recently in the climate justice movement. He has facilitated 1,500 workshops on five continents and led activist projects on local, national and international levels. His 10 books and many articles reflect his social research into change on community and societal levels. His newest books are “Viking Economics: How the Scandinavians got it right and how we can, too” (2016) and “How We Win: A Guide to Nonviolent Direct Action Campaigning” (2018.)