U.S. Bases in Okinawa Are a Threat to Freedom 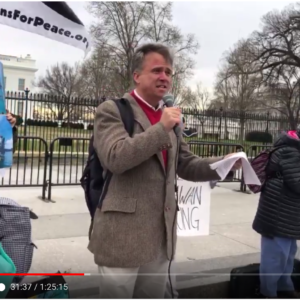 There are a number of problems with the idea that maintaining and expanding giant military bases in other people’s countries protects freedom in the U.S. or in the occupied land.

For one thing, the United States maintains these bases in everything from the most brutal dictatorships to the most liberal so-called democracies. Are the U.S. troops in Bahrain and Saudi Arabia protecting the same freedoms as those in Italy and Germany? What freedoms might those be?

For another thing, few, if any, nations occupied by U.S. bases are actually credibly threatened with invasion and overthrow. For North Korea to effectively invade and occupy either Japan or the United States, much less both of them, even if those countries were unarmed and completely unaware of nonviolent resistance tactics that have become mainstream (boycotts, strikes, sit-ins, etc.), would require the complete abandonment of North Korea by a population universally recruited into the military and multiplied by some sort of rapid cloning.

China has also expressed zero interest in occupying and reducing freedoms in Japan or the United States, would eliminate hundreds of millions of customers for its products in the process, and has responded in kind to reduced or increased U.S. militarism and hostility. In other words, occupying Okinawa with tens of thousands of armed U.S. troops does nothing positive for freedom.

But it does do something negative. The people of Okinawa are denied the freedom not to be a prime target for attack, the freedom not to have their water poisoned, the freedom to live without noise pollution and crashing airplanes and drunken vandals and rapists and massive environmental destruction. Over and over again they tell pollsters and elect governments to shut down these bases. And over and over again more bases are built in the name of spreading democracy.

The people of Okinawa don’t just vote; they organize and act nonviolently; they risk prison and injury and death. They pull in activists from around the globe to help them in their cause — a struggle against the U.S. government whose people imagine it is protecting democracy, while polls find global opinion to be just the opposite.

And of course, during all of this military buildup and the counterproductive wars and threats of wars, the people of the United States see their own freedoms eroded in the name of the militarism that is supposedly aimed at protecting their freedoms.

Okinawa ought to be independent and not Japanese, but Japan claims ownership of Okinawa, and the people of Japan are more accepting of the U.S. occupation of Okinawa, though many of them seem to be getting tired of it or at least of paying for it financially. And a lot of them are protesting in solidarity with the people of Okinawa. But the people of Japan have never been allowed to vote on the U.S. occupation of Okinawa. Nor have the people of the United States. Lay out for either population the counterproductive, endangering nature of these bases, the environmental cost, the financial cost, and the risk of provoking nuclear apocalypse, and I’d be willing to go with the resulting public vote.

But what of the idea that the bases protect not freedom but safety, that the threat is not invasion and freedom reductions but deadly attack? There are two main problems with this idea, either of which is sufficient to reject it. First, the evidence is overwhelming that this sort of militarism is counterproductive, that it generates hostility rather than deterring it. Second, even if you believe in the logic of deterrence through the threat of mass murder and destruction, current technology allows the United States to accomplish that anywhere on earth without nearby bases. This means both that the bases in Okinawa are not needed for what they claim to be for, and that they are actually kept there for some other reason or reasons. Combine this fact with the revelations made by Edward Snowden that the United States has sabotaged Japanese infrastructure in order to be able to extensively damage Japan should it choose to, and I will leave it to the people of Japan to reason out what the bases are really for.

In reality there is no upside to these bases that can be weighed against poisoning the groundwater of Okinawa with cancer-causing chemicals, raping Okinawan girls, or destroying coral that protects us all from an actual danger while creating another. Environmental collapse and nuclear war are the twin catastrophes we face. Militarism is a top cause of the first, the sole cause of the second, and the pit into which unfathomable resources are dumped instead of being put to actually protective use.

Of course, U.S. military bases poison ground water all over the United States as well, and poison U.S. troops at foreign bases, but my friend Pat Elder has noted that some people are far less accepting of being given cancer than Americans are. We cannot afford, any of us, to be accepting of increasing the risks of global catastrophe. There is no such thing as isolated climate destruction or isolated nuclear war.

We need the people of Japan and of the world to change course, uphold Article 9 of the Japanese Constitution, and renounce the idea of wars, militaries, and bases. You may have heard the U.S. government is shut down. Not a single war or base or ship has been shut down. Open up the non-military U.S. government! Shut down all the military bases!