U.S. and NATO Buildup in Eastern Europe and Scandinavia And U.S. Military Bases and Exercises in Africa 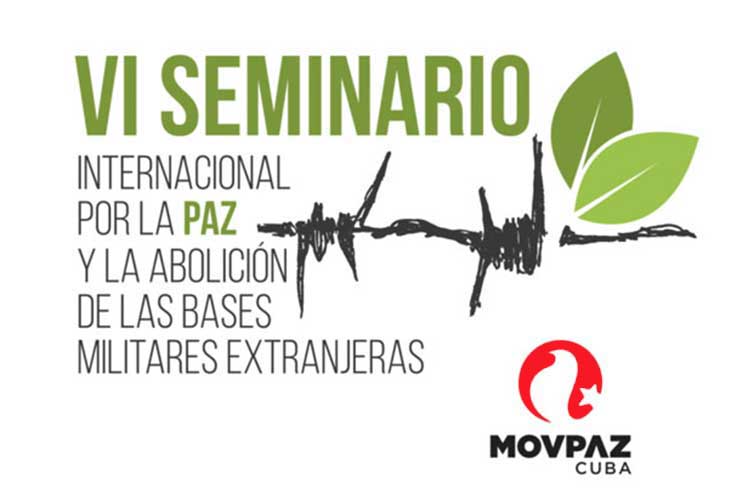 Presentation for the VI Symposium on the Abolition of Foreign Military Bases
Guantanamo, Cuba, May 4-6, 2019

I must begin my presentation with an apology to the people of Cuba for my country, the United States of America occupying Cuban sovereign land for the Naval Base of Guantanamo, the military base that the U.S. has held longest outside the U.S.  and housing for the past 18 years the infamous prison located there.

I also apologize for the terrible sanctions the U.S. has had on the people of Cuba for over 50 years as economic terrorism and forms of intimidation and retaliation for not bending to the will of the U.S. for over 61 years, since the Cuban Revolution.

I also make a personal apology to the President of the Cuban Institute for Friendship of the Peoples (ICAP) Fernando Gonzalez for his unlawful imprisonment in the United States and to the other persons known as the Cuban Five who were unlawfully imprisoned in the U.S.

I also want to apologize to the people of Venezuela and Nicaragua for the U.S. role in the attempted overthrow of the elected governments to their countries and the sanctions the U.S. has placed on those countries.  I also apologize to the people of Honduras for the role the U.S. played in the overthrow of their government.  At this moment, at the request of the Government of Venezuela, friends in Washington, DC are occupying the Embassy of Venezuela to prevent the attempt coup makers of Juan Guaido from invading the Embassy building.

Now to the subject for my presentation. The 70th anniversary of the North Atlantic Treaty Organization (NATO) was held in Washington, DC April 3 and 4, 2019.  Many organizations came to Washington to challenge the antagonistic approach to Russia that has made Europe another crisis area after more than 25 years of the Cold War having faded into history.

Over the last decade, the U.S. and NATO have been actively securing military bases in the Baltic, Scandinavian and Eastern European countries along the border of Russia.

In Estonia, there is a NATO battalion lead by the UK and composed of 800 troops from Denmark and France with 4 German Typhoon jets performing Baltic “Air Policing” missions.

In Latvia, there is a 1,200 person battalion led by Canada and composed of military personnel from Albania, Italy, Poland, Spain and Slovenia.

In Poland, there is a U.S. Aegis land-based missile system and a 4,000 U.S. lead battalion with heavy armor, including 250 tanks, Bradley Fighting Vehicles and Paladin howitzers.

In Romania, the U.S. has placed an Aegis land-based missile system, the first in Europe since the Cold War.

In the north of Europe in Scandinavia, NATO’s biggest military exercises since the end of the Cold War, named Trident Juncture 18, took place in Norway from October 25 to November 7, 2018 in what was a massive display of strength intended to intimidate Russia.

Around 50,000 troops from 31 countries — NATO’s 29-member states plus Sweden and Finland — took part in the maneuvers organized in central Norway for the land exercises, in the North Atlantic and the Baltic Sea for the maritime operations, and in Norwegian, Swedish and Finnish airspace.

That is about 10,000 more soldiers than in the Strong Resolve exercises in Poland in 2002, which brought together Alliance members and 11 partner states.

10,000 vehicles took part in the military exercises and when lined up end-to-end, the convoy would be 92 kilometers or 57 miles long.  250 aircraft and 60 ships took part, including the nuclear-powered aircraft carrier USS Harry S. Truman.

More than 20,000 land forces, as well as 24,000 navy personnel including US Marines, 3,500 air force personnel, around 1,000 logistics specialists and 1,300 personnel from a range of NATO Commands participated.

The top five contributing nations were the United States, Germany, Norway, Britain and Sweden, in that order. 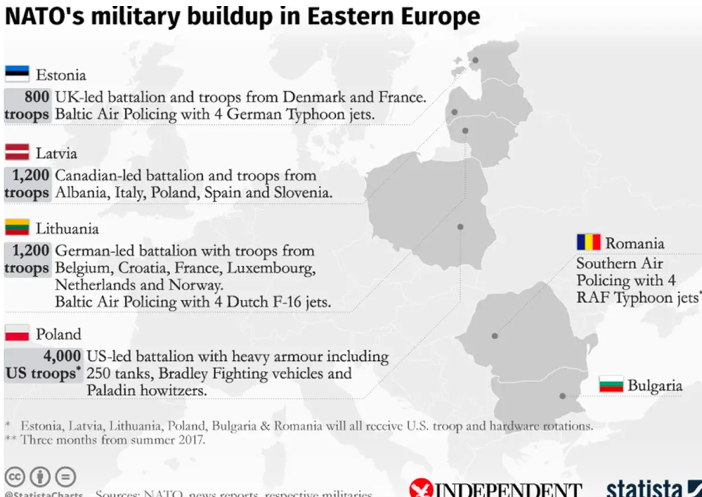 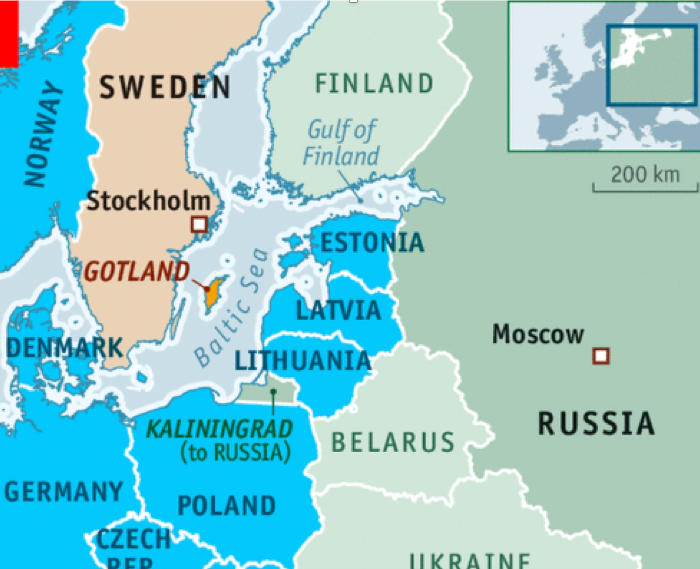 In 2017, despite strong protests from Russia, 330 US Marines deployed on rotation to the Norwegian training base at Værnes in the center of Norway. The US wants to increase the number of US military to 700 and station them further north at Setermoen, 420 kilometers from Russia.  The US deployment agreement would also be extended from the current six-month renewable periods to five years.

Russia’s annexation of Crimea in 2014 is the rationale NATO used to increase US/NATO personnel in central and eastern Europe.  The Russian government has repeatedly and strongly criticized the deployment of U.S. forces in Norway. 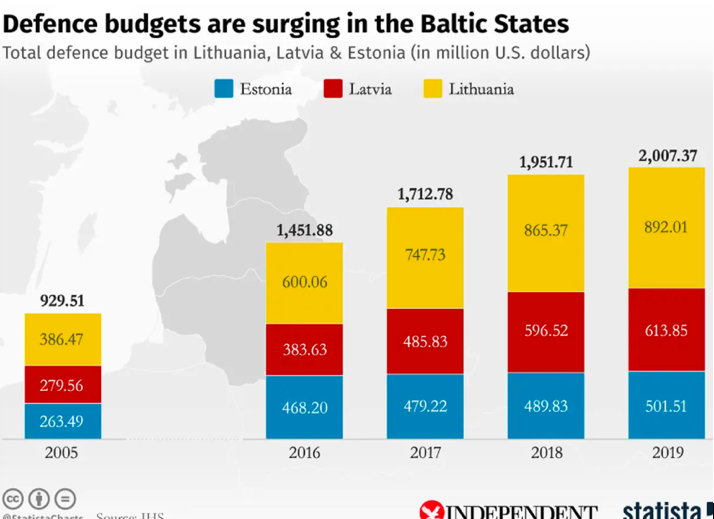 Since Russia’s annexation of Crimea in 2014,  Poland has been an key element of the increased U.S. presence in Eastern Europe, including repeat deployments of the 173rd Airborne Brigade Combat Team to show the rapid mobilization U.S. and NATO forces. In August, the U.S. Air Force deployed five F-22 Raptors and 40 airmen to Poland to take part in joint exercises there.

The U.S. also has announced that U.S. Army Europe is expanding its troop presence by adding 1,500 soldiers to its forces in Germany.

The military said in September 2018 that the new unit activations are scheduled to begin this year and that the troops and their families should all be in place in southern Germany by September 2020. 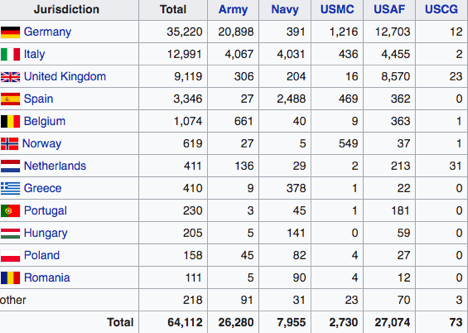 U.S. military presence in Europe reached its peak in the fifties with more than 450,000 troops operating on more than 1,200 sites. After the end of the Cold War the US military presence in Europe rapidly decreased to 213,000 servicemen, and later in 1993 it decreased even further to 112,000 servicemen. Today there are 64, 112 American troops permanently stationed across Europe. Military infrastructure and the US military in Europe (EUCOM) can be classified in sections.

Beside French and British nuclear capabilities the US has also maintained a significant number of nuclear warheads across Europe. During the Cold War era US had more than 2,500 nuclear warheads in Europe, however after the end of the Cold War and the fall of the Soviet Union that number rapidly decreased. Today according to some unofficial estimates, the US has around 150 to 250 warheads deployed in Italy, Turkey, Germany, Netherlands and Belgium. It should be noted that most of these weapons are free fall gravity bombs delivered by aircrafts.

Though most of the nuclear weapons are in Western Europe total disarmament and removal of these warheads is highly unlikely, considering the situation in Ukraine and in the Middle East. There are two types of bases currently used to hold nuclear weapons in Europe: Nuclear Air Bases and Air Bases with Nuclear vaults in caretaker status.

Air Bases with Nuclear vaults in caretaker status are in Norvenich (Germany), Araxos (Greece), Balikesir (Turkey), Akinci (Turkey). Germany has the most U.S. nuclear weapons with the potential storage of more than 150 bombs. All these weapons can be moved and shifted to other bases or other countries if desired.

The Russian annexation of Crimea at the request of the people of Crimea who voted for annexation in a plebiscite, has given war-hawks in both the U.S. and NATO the rationale they feel they need to dramatically increase the number and strength of aggressive military exercises in Scandinavia and the Baltic countries.

Additionally, the confrontation of U.S. and Russian military and foreign policies in Syria and in Venezuela have been the justification of an increase in the U.S. military budget, while the Russian government has a budget of only one-tenth of the U.S. budget and is very small when compared to the combined military budgets of all 29-NATO countries.

I want to bring to your attention the dramatic increase in the number of U.S. military exercises and personnel in countries in Africa under the U.S. command called AFRICOM.  According to the excellent research done by Nick Turse and Sean Naylor posted on April 19, 2019, called “The U.S. Footprint in Africa,” there are 35 “code-named” military exercises with U.S. military in 19 countries. 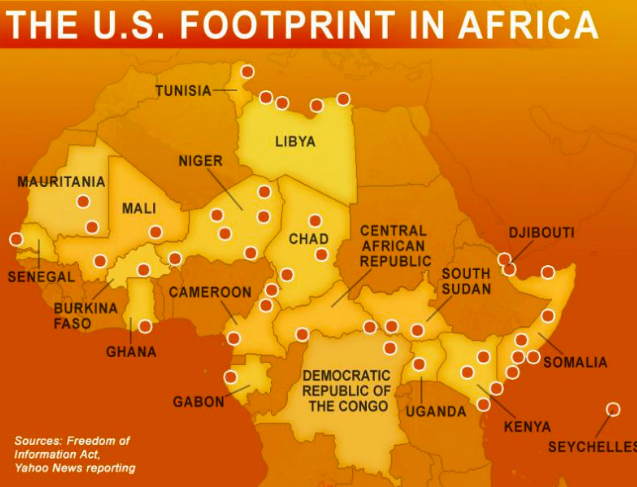 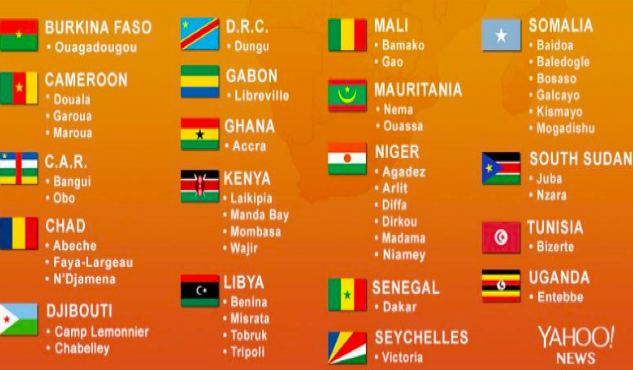 ECHO CASEMATE: This operation covers a series of activities in the Central African Republic. It began in 2013 as a support mission for French and African forces deployed to the troubled Central African Republic for peacekeeping purposes and continued as an advise-and-assist mission to those African peacekeeping forces. However, U.S. forces neither accompanied their partners in the field nor formally trained them. The operation also covered the introduction of contractors and Marines to secure the U.S. Embassy in Bangui and the deployment of a small U.S. special operations contingent to assist the U.S. ambassador in missions to counter the Lord’s Resistance Army. In the first days of the operation, the U.S. military airlifted hundreds of Burundian troops, tons of equipment and more than a dozen military vehicles into the Central African Republic, according to Africom. The U.S. military continued transporting French forces in and out of the Central African Republic, and the mission was still underway in early 2018.

EXILE HUNTER: One of a family of similarly named counterterrorism efforts that U.S. special operations forces have conducted in East Africa. Exile Hunter was a 127e program in which elite U.S. troops trained and equipped an Ethiopian force for counterterrorism missions in Somalia. Bolduc says he shut it down in 2016 because the Ethiopian government was uncomfortable about the force not falling under its command. However, a February 2018 Defense Department list of named operations suggests it had been resurrected.

JUKEBOX LOTUS: Operation Jukebox Lotus began as the crisis response to the September 2012 attack in Benghazi, Libya, that killed U.S. Ambassador J. Christopher Stevens and three other Americans, but continued until at least 2018. It gives Africa Command broad authority to conduct a variety of operations in Libya as required and is specific to neither special operations nor counterterrorism.

JUNCTION RAIN: A maritime security effort in the Gulf of Guinea involving African and U.S. Coast Guard boarding teams operating from U.S. Navy ships or those of African forces. In 2016, the hybrid teams conducted 32 boardings, resulting in $1.2 million in fines levied for more than 50 maritime violations, as well as the recovery of a diesel fuel tanker that had been seized by pirates. Last year, operations with the Senegalese and Cabo Verdean navies resulted in at least 40 boardings — mostly of fishing vessels — and $75,000 in fines handed down for two fishing violations.

JUNCTION SERPENT: A surveillance effort in Libya that, as part of the 2016 campaign of airstrikes against Islamic State positions in the Libyan city of Sirte, gave Joint Special Operations Command specific authorities to coordinate assets in order to develop targeting information for the campaign

JUNIPER MICRON: In 2013, after France launched a military intervention against Islamists in Mali code-named Operation Serval, the U.S. began Operation Juniper Micron, which involved airlifting French soldiers and supplies into that former French colony, flying refueling missions in support of French airpower, and assisting allied African forces. Juniper Micron was ongoing as of October 2018, with plans for it to continue in the future.

OAKEN SONNET I-III: A series of three contingency operations in South Sudan. Oaken Sonnet I was the difficult 2013 rescue of U.S. personnel from that country at the beginning of its civil war. Oaken Sonnet II took place in 2014 and Oaken Sonnet III in 2016.

OAKEN STEEL: The reinforcement of the U.S. Embassy in Juba, South Sudan, to protect State Department personnel during a conflict between rival factions in that country’s civil war, Operation Oaken Steel, which ran from July 12, 2016, to Jan. 26, 2017, saw U.S. forces deploy to Uganda to provide for rapid crisis response during the unrest.

We plan to have a longer presentation on U.S. military bases in Africa at the next symposium.