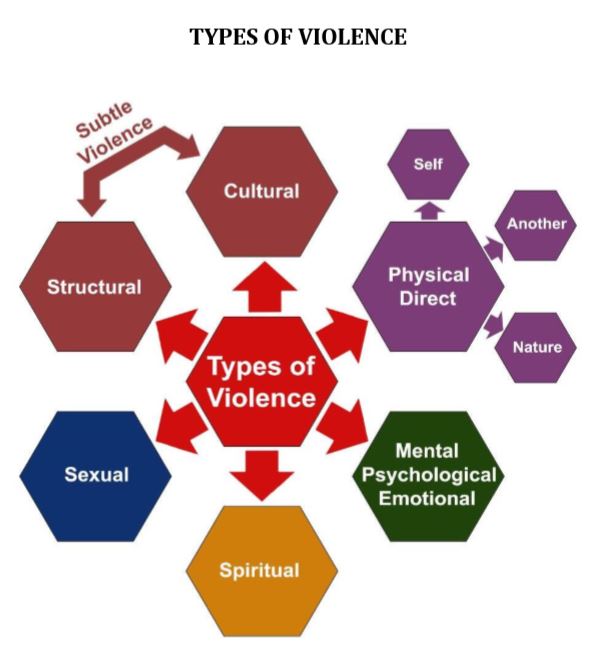 “The 20th century will be remembered as a century marked by violence. It burdens us with its legacy of mass destruction, of violence inflicted on a scale never seen and never possible before in human history. We owe our children … a life free from violence and fear. In order to ensure this, we must be tireless in our efforts not only to attain peace… but… address the roots of violence. Only then will we transform the past century’s legacy from a crushing burden into a cautionary lesson.” – Nelson Mandela, Foreword to World Health Organization’s World Report on Violence and Health, 2002

The WHO World Report on Violence and Health (WRVH) defines violence as:

“The intentional use of physical force or power, threatened or actual, against oneself, another person, or against a group or community that either results in or has a high likelihood of resulting in injury, death, psychological harm, mal-development or deprivation”

Physical violence can be classified into three broad categories, according to who commits the violent act:

Direct violence against nature can be termed as Ecological Violence. This form of violence is often intimately tied to commercial gain. However, we must accept that we can no longer take our planet for granted, and that the increasing ecological imbalance on our planet is a cause of grave concern. We are now at a tipping point, where continued exploitation of the Earth’s resources for our comfort and financial gain will only lead to our own destruction.

The term Structural Violence is commonly ascribed to the renowned Norwegian sociologist and peace researcher, Johan Galtung. He first introduced the term in his article ‘Violence, Peace, and Peace Research,’ published in 1969. Structural Violence refers to a form of violence wherein social/cultural structures or institutions harm people by preventing them from meeting their basic needs. Galtung’s Violence Triangle (above) makes a clear distinction between these three types of violence.

Galtung argues that the Violence Triangle has a similar structure to that of an iceberg, in which there is always a small visible part and a huge hidden part. Direct Violence, since most of its effects are visible, corresponds to the tip of the iceberg. It is commonly thought that Direct Violence is the worst kind of violence due to its inherent visibility, which makes it easier to identify and therefore to combat. However, this is not true. It is important to note that Direct Violence is the symptom, the manifestation of a deeper cause, whose origin lies in the hidden part of the iceberg: in cultural and structural violence. Thus, cultural and structural violence are often the cause of direct violence and direct violence reinforces structural and cultural violence, leading to a never-ending vicious circle of violence.

Cultural Violence finds expression through religion, ideology, language, art, science, media, education, etc., and serves to legitimize direct and structural violence and to inhibit or suppress the response of victims. It is rooted in the illusion of superiority of one culture over another, one ethnic group over another, one nation over others, etc. It also offers a justification for humans, unlike other species, to inflict widespread violence and destruction, and to be rewarded in some manner for doing so.

Since both Structural and Cultural Violence are covert forms of violence and discrimination, they can be subsumed under Subtle Violence. An example of this can be seen at the way some International Conferences are planned. Women speakers are frequently given time slots only in the afternoons or towards the fag end of a session, when attendance gets thinned or participants feel tired and so are no longer eager to listen closely.

Mental Violence refers to purely psychological and emotional harassment, torture and its equivalents. For example, a young Indian bride may be made to feel inferior simply because her complexion is dark, or she may be repeatedly taunted by her in-laws on the ground that her parents haven’t provided adequate dowry. This is a clear instance of mental violence which can easily happen in Indian society.

It may here be pointed out that to begin with, in pre-modern times in India, dowry was a way to give the daughter her share of the landed property in the form of jewellery or cash, which she was solely entitled to and was considered sacrosanct for her by her husband and in-laws. It is only as Indian society became more materialistic that the prospective husband and his family started demanding and receiving dowry. Dowry became illegal and punishable with a prison term in India with the Dowry Prohibition Act in 1961, but is still practiced covertly by rich, middle- class and poor alike. Dowry is not a uniquely Indian practice; similar practices exist in other cultures as well.

On a personal level, an example of Mental Violence is when the significant other in a relationship gives his or her partner the silent treatment. Ostracism from one’s family and/or community is also a form of Mental Violence. For instance, Gandhi’s autobiography describes how he was ostracized by the Bania community when he went to England to study Law, because it was a caste taboo to go overseas.

Sexual Violence violates the sanctity of the victim. Paedophilia, rape, including marital rape, and human trafficking all fall in this category. Adults and children can be trafficked or enslaved and forced to sell their bodies for sex.

Sexual Violence can also be used as a weapon of war. Both men and women can be victims of this form of violence. The United Nations Security Council Resolution 1820, adopted in 2008, describes conflict-driven sexual violence as “a tactic of war to humiliate, dominate, instil fear in, disperse and/or forcibly relocate civilian members of a community or ethnic group…” In recent times, sexual violence has been used as an instrument of calculated warfare particularly in cases of ethnic conflict. This form of violence is finally being discussed in the public sphere. In 2018, the Nobel Peace Prize was shared by Congolese gynaecologist Dr. Denis Mukwege and Yazidi activist Nadia Murad “for their efforts to end the use of sexual violence as a weapon of war and armed conflict.”

An even more overlooked form of violence is that which may be called spiritual. This kind of violence results from an overemphasis on the human being’s material interests as against his or her spiritual welfare. When parenting, education systems and lifestyles focus on developing the body and mind but neglect the spirit, it can be classified as spiritual violence. This attitude may be termed as violence because it injures the totality of a person’s being. Such imbalance in upbringing prompts children – especially when they become young adults – to take to unduly materialistic life styles, consumerism and extreme individualism. This tends to harm interpersonal relationships, leading to loneliness, depression, broken relationships and various psychic ailments. Indeed, indifference to our spiritual interests costs us very dearly.

Dr. Suman Khanna Aggarwal is former Professor of Philosophy at Delhi University and Founder and President of Shanti Sahyog, a Gandhian NGO, and the Shanti Sahyog Center for Peace & Conflict Resolution in India.