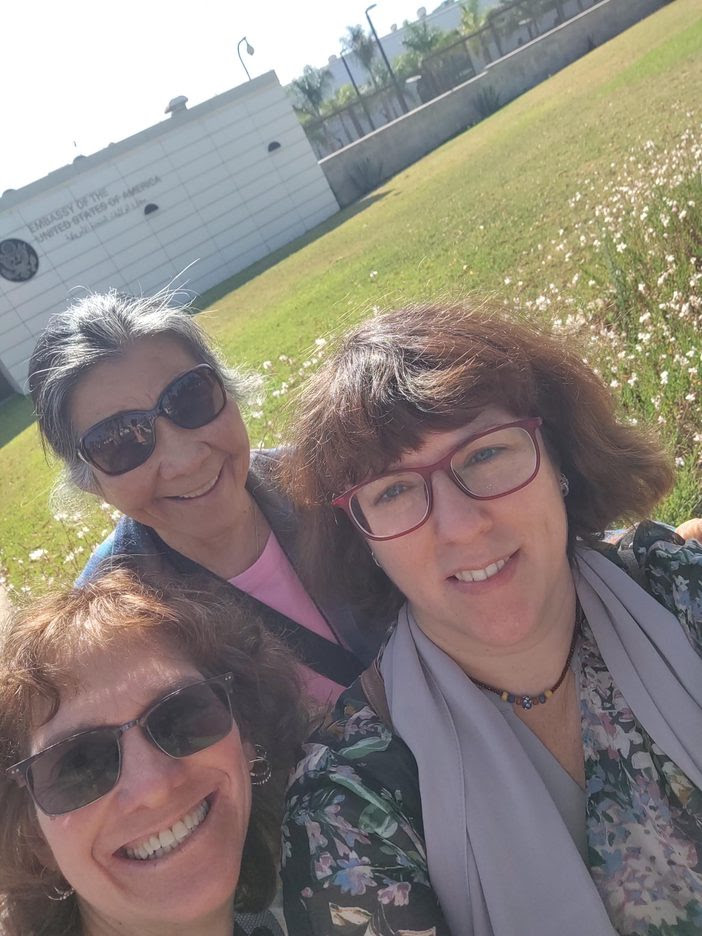 Three US women heading to visit their friends in Boujdour, Western Sahara, were forcibly turned back on May 23rd, when they landed at Laayoune Airport. Twelve men and six women Moroccan agents physically overpowered them and placed them against their will on a plane back to Casablanca. During the scuffle, one of the women’s shirt and bra were pulled up to expose her breasts. In the cultural context of the passengers on the plane, this was a serious form of harassment and violence against women.

Wynd Kaufmyn said of her treatment by the Moroccan forces, “We refused to cooperate with their illegal actions. I repeatedly shouted out on the departing airplane that I wanted to go to Boujdour to visit Sultana Khaya, who has endured torture and rape at the hands of Moroccan agents.

Adrienne Kinne said, “We were not told the legal basis for our  detention or deportation though we asked repeatedly.  I believe this was due to our detention and deportation being a violation of international human rights law.” 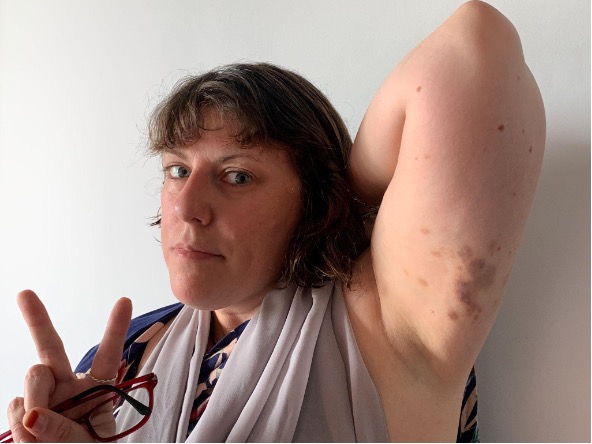 Kinne further expressed dismay, “I am sorry that the female officers were put in a position by their male superiors to restrain us. This is another example of pitting women against women to serve the egos of men in power.

Lacksana Peters said, “I have never been to Morocco or Western Sahara before. This kind of treatment leads me to think that we should boycott Morocco and double-down on efforts to visit Western Sahara. The Moroccans must be hiding something.”

Meanwhile the siege of the Khaya Sisters by the Moroccan forces continues despite the presence of additional Americans visiting the home.  Although forced entry and attacks in the house have stopped, many visitors to the Khaya home have been tortured and beaten in the last few weeks.

The delegation is heading home and will go immediately to the White House and State Department to demand that the US stop enabling the Moroccan government in these human rights abuses. They invite all who care about human rights to join their voices and speaking up for Saharawi rights and against violence against women. Wynd Kaufmyn said, “I hope all who can will join us to stop the siege of the Khaya family home, the rapes and beatings of Saharawi women, and call for an independent investigation into the human rights situation in Western Sahara.”

Western Sahara is bordered to the north by Morocco, to the south by Mauritania, to the east by Algeria, and to the west by the Atlantic Ocean, with a total area of about 266,000 square kilometers.

The people of the Western Sahara, known as the Saharawis, are considered to be the indigenous inhabitants of the region, which is known as EL-Sakia El-Hamra Y Rio de Oro. They speak a unique language,  Hassaniya, a dialect rooted in classic Arabic. ​Another noteworthy distinction is their development of one of the world’s oldest and longest surviving democratic systems. The Council of Forty-Hands (Aid Arbaeen) is a congress of tribal elders delegated to represent each of the nomadic peoples historically present in the region. As the highest authority in the realm, its decisions are binding, and the council reserves the right to unite all of Sahara’s peoples in defense of the motherland.

Morocco has occupied Western Sahara since 1975, however, the United Nations considers it to be one of the world’s last non-self-governing territories. From 1884-1975 it was under Spanish colonization. Spain withdrew after persistent resistance movements for independence, however, Morocco and Mauritania immediately sought to take control of the resource-rich region. While Mauritania rescinded its claim, Morocco invaded with tens of thousands of troops, flanked by thousands of would-be settlers, and began its formal occupation in October 1975. Spain retains administrative control and is the top recipient of the Western Sahara’s natural resources.

In 1991, the United Nations called for a referendum in which the people of Western Sahara would have the right to decide their own future. (UN resolution 621)

The Polisario Front, the political representative of the Saharawi people, fought Morocco intermittently from 1975 until 1991 when the United Nations brokered a cease-fire and established the United Nations Mission for the Referendum in Western Sahara (MINURSO.) The long-promised referendum on self-determination was never realized. In the fall of 2020, after decades of broken promises, continued occupation, and a series of Moroccan violations of the cease fire, the Polisario resumed the war.

Human Rights watch reports that Moroccan authorities have long kept a strong lid on any public protests against Moroccan rule in Western Sahara and in favor of self-determination for the territory. They have beaten activists in their custody and on the streets, imprisoned and sentenced them in trials marred by due process violations, including torture, impeded their freedom of movement, and followed them openly. Moroccan authorities also refused entry to Western Sahara to scores of foreign visitors over the last few years, including journalists and human rights activists.

The 2021 U.S. State Dept. report on Western Sahara states that the “lack of reports of investigations or prosecutions of human rights abuses by Moroccan officials in Western Sahara, whether in the security services or elsewhere in the government, contributed to a widespread perception of impunity.”

Sultana Khaya is a human rights defender promoting independence for the Saharawi people and advocating for the end of violence against Saharawi women. She is president of the Saharawi League for the Defense of Human Rights and the Protection of Western Sahara’s Natural Resources in occupied Boujdour and a member of the Saharawi Commission against the Moroccan occupation (ISACOM). Khaya was nominated for the Sakharov Prize and winner of the Esther Garcia Award. As an outspoken activist, she has been targeted by the occupying Moroccan forces while engaged in peaceful protests.

Khaya is one of the most influential human rights activists of Western Sahara. Waving Saharawi flags, she peacefully demonstrates for human rights, especially women’s rights. She dares to protest in front of the occupying Moroccan authorities and chant slogans of the Saharawi self-determination to their face. She has been abducted, beaten, and tortured by Moroccan police. In a particularly violent assault in 2007, her right eye was gouged out by a Moroccan agent. She has become a symbol of courage and a source of inspiration for Saharawi independence.

On November 19, 2020, the Moroccan security forces raided Khaya’s house and hit her 84-year-old mother on the head. Since then, Khaya has been under a de facto house arrest. Security personnel in civilian clothes and uniformed police keep the house under siege, limiting her movements and preventing visitors, despite no court order or legal basis for it.

On May 10, 2021, several Moroccan civilian-clothed security agents raided Khaya’s home and physically assaulted her. Two days later they returned, not just to beat her again, but to sodomize her and her sister with a stick, and to beat their brother to the point of losing consciousness. Khaya said, “in a brutal message, they forcibly penetrated my sister using the broomstick that we use to wave the Western Sahara flag.” Saharawi society is conservative and has taboos about speaking of sexual crimes publicly.

Khaya is appealing to the Biden administration as Biden himself has championed human and women’s rights. He is the author of the domestic law Violence Against Women Act (VAWA.) Yet, by continuing Trump’s recognition of Morocco’s sovereignty over Western Sahara, which is in violation of the United States constitution and international law, he is condoning ongoing human rights violations and sexual abuse of women by the Moroccan forces.

“The U.S. position on Western Sahara is legitimizing the illegal occupation and further attacks on Saharawis,” Khaya says.

The Saharawi civil society, on behalf of the Khaya family, appeals to the international community and human rights advocates everywhere around the world to stand for and defend the right of everyone to live in peace and dignity. Since November 2020, the Khaya sisters, and their mother, have been under siege by Moroccan armed forces. Today, we are asking you to add your voice to that of the Khaya family and help us END the siege.

We call on the Moroccan government to: