This Is Really Not A Drill 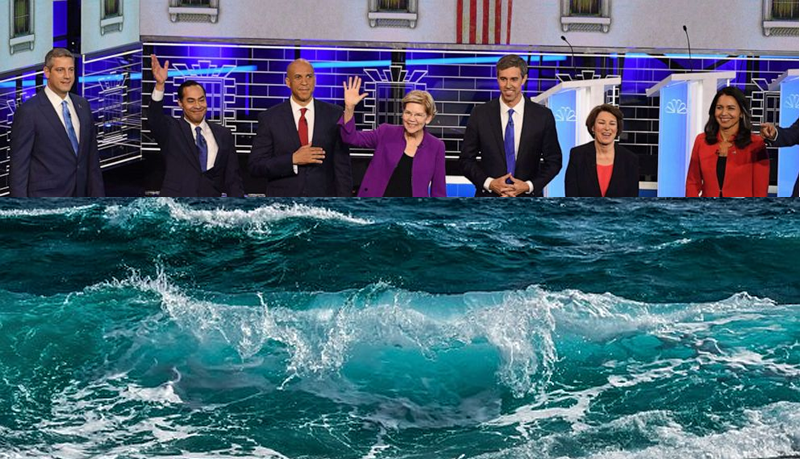 On Wednesday, the first 10 of the 20 Democrats whom the corporate media is permitting into what they call debates were asked what the greatest threat to the United States is. A worthy and funny answer would have been “MSNBC.” Another worthy and funny answer would have been “Donald Trump,” which was in fact Jay Inslee’s answer — and he made clear elsewhere in the event that climate collapse is also his answer. A worthy answer, though nobody would have understood it, would have been “nationalism.” But the correct answer would have been U.S. promotion of environmental collapse and nuclear war. Cory Booker, unprincipled hypocrite though he is, came close with climate change and nuclear proliferation, but it’s not just the proliferation; it’s also the U.S.-led arms race and threat of first use. Tulsi Gabbard got it half right with nuclear war. Elizabeth Warren and Beto O’Rourke got it half right with climate change. Julián Castro got it half right and half bonkers with climate change and China. Similarly John Delaney with nuclear weapons and China. Tim Ryan went full-on loony with just China. Bill de Blasio appeared to completely lose his mind and to believe that Russia was not only the greatest danger but had already attacked. And Amy Klobuchar went for the demon of the week: Iran. May I remind you that this is supposed to be the party of enlightenment and rational thought.

Extinction Rebellion in the UK has just published a book called This Is Not a Drill: An Extinction Rebellion Handbook. I’d like to recommend it to U.S. presidential candidates. Half the book is about where we are, and half about what we must do. It’s a British book, but I expect it to be useful in various ways to anyone on earth. When I say that it’s a British book, I mean that it does things a U.S. book might not. It dedicates itself to nonviolent action, drawing on the wisdom of U.S. scholars in a manner that U.S. movements tend not to. It declares itself in open rebellion against an illegitimate UK government and declares the social contract broken and null and void, the sort of statement that most people in the United States have a wee bit too much of that nationalism I mentioned to try. It speaks openly of protesters trying to get arrested, rather than carefully claiming to be only risking getting arrested. It expects popular acceptance (and cooperation from police) at a level one could not expect in the United States; and it includes sections by two members of Parliament. It demands not only immediate honesty and immediate action by an existing government but also the creation of a Citizens’ Assembly (apparently modeled on actions in Porto Alegre and Barcelona) to lead government action on climate; a move that U.S. culture is too antidemocratic to take seriously.

But these are matters of degree, and it is too late not to make such demands everywhere — because the chance that they might succeed is our only hope. It is in conveying the urgency of the existential emergency that this book most excels. It does so in a great many ways, but one I want to point out for the sheer sociopathic silliness of it. One of the many contributors of short sections of the book describes having been hired to advise five super-wealthy men. They wanted to know how they could maintain their dominance over their security guards following “the event.” By “the event” they meant environmental collapse or social unrest or nuclear explosion, etc. Would they need robot guards? Would they be able to pay guards with money anymore? Should they create disciplinary collars to put on their guards? The author reports advising them to treat their employees super well starting now. They were reportedly amused.

The book includes a good deal on activism tactics, how to use the corporate media, how to block a bridge, why, which bridge, how to entertain people on the bridge, how to feed the protesters, etc. It also addressed the Yellow Vest problem: if you change policies in ways that are unfair to working people, they will protest steps that help the planet. The book provides a vision of immediate and massive change created democratically and in a manner that benefits from popular support rather than creating popular resistance. It’s a vision of car-free cities and lifestyle revolutions. It’s a vision that includes periods of sacrifice possibly followed by better times.

The book does not pretend that anything will be easy, and in fact democracy is quite hard. This is brought out unintentionally by the fact that there are contradictions between various contributors to the book. Early on we’re told that we have the choice to die or survive or thrive, but later sections admit to having no idea whether thriving is still possible or to being convinced that it is not and that the possibility of surviving may have passed us by. One author even creates a probably false choice between draconian authoritarian all-out action to save us or accepting total defeat but devoting ourselves to kindness and love while we die. The book is a bit contradictory and a bit repetitive. It gets U.S. history wrong in quoting Andrew Jackson warning that Native Americans would vanish, and then stating that they did in fact vanish. In reality they were thriving in the east, and he was pretending that they would soon be gone from natural causes if not forced west for their own good. They did not simply vanish; he forced them west, killing many in the process. The book also suffers mildly from the typical environmentalist warning that climate collapse will create violence and war, as if that were a law of physics into which no human agency enters.

Nonetheless, I think this book is a model for how to talk about an emergency, and a model for how opponents of nuclear weapons should be talking and how opponents of war should be talking. I know that everybody addresses war with urgency on those days when Trump threatens to immediately obliterate Iran or North Korea. I know that we occasionally point out that hundreds of near-miss nuclear annihilation accidents, misunderstandings, ego-trips, and lunatics loose in the halls of power is incredible good luck that simply cannot hold out much longer. I know that three or four people read each new completely nuts nuclear policy statement from the Pentagon and warn that we will all die. But, trust me, get this book, read it, and start talking like it. There is not a moment to waste.

We all need to be part of the urgent all-hands-on-deck-immediately efforts to prevent both worsening of environmental collapse and nuclear and all war. Even in this book, the war on drugs is understood as part of the assault on the environment. But nothing is said about the overall role played by militarism, nuclear and otherwise, in environmental destruction. There’s a discussion of economic conversion away from fossil fuels, but it would benefit from the work of Seymour Melman and others who have developed plans for economic conversion from weapons of war. And we would all benefit from understanding that we can immediately convert from weapons and fossil fuels and livestock and all variety of destruction to peace, sustainability, ecosystemic balance, and creation — or go extinct.