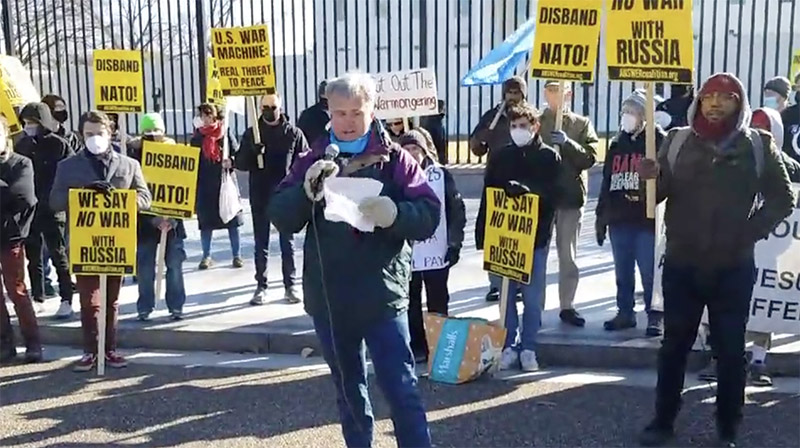 Video from the White House on Saturday:

"We need a Department of Defense Against the Warmongers" said David Swanson of @WorldBeyondWar, because defense contractors & imperial politicians will lie us into one for 💰💰💰 pic.twitter.com/95EMNlTRkh

Video from webinar on Saturday here.

The people inside the White House sometimes believe they can sell us what we don’t want to buy. They’ve got a recipe for mixing up irresistible poisons. They do polling. They test out phrases on focus groups. They turn entire foreign governments into a single person and that person into Adolf Hitler. They say defense, democracy, and appeasement a lot. They re-stage group photos bravely screening the murder of distant enemies.

But sometimes they miscalculate. Sometimes it’s the cumulative result of decades of spin from numerous administrations, when even a good corporate reporter who wants to believe everything just can’t stomach any longer the recycled lies that he’s fallen for too many times before.

And so, they tell us that Russia’s going to start a war in Nazi fashion, with a false flag excuse — albeit against a U.S.-backed coup government with Nazi elements. And they tell us Russia did this 8 years ago and there was no coup. And everyone accepts that, of course. I mean, who can remember anything from 8 years ago? We merely have recordings of them plotting the coup and photos of them handing out pastries to the protesters.

Have they ever once brought you any pastries?

But they seem to have misjudged their own approved journalists in claiming that Russia is about to act, because one of them — like Oliver Twist in the orphanage humbly asking for a bit of food — actually spoke up and said “Sir, could we have just the slightest bit of evidence for your claims please?” And the very concept of evidence seemed incomprehensible to them. And that seemed odd, even to people who believe Trump is Putin’s slave and NATO is a charitable philanthropy.

What if they’re wrong about more than the ability to sail through without evidence? What if people aren’t impressed by the photos of arm-chair killers watching families blown up? What if they’re wrong, not about the U.S. public wanting war with Russia. They know the U.S. public doesn’t want war with Russia — at least not a war in which any people deemed to matter (that is U.S. people) die.

What if we agree with them on the need to stand up strong and stop appeasing evil forces, but understand the evil forces that most need resistance not to be based in Moscow, but rather to be running Lockheed Martin, Boeing, Northrop Grumman, Fox News, CNN, MSNBC, and the Washington Post, and toiling away in the U.S. government, dealing weapons around the globe, pushing for more and more bases and missiles, and insisting on the Eurasia Pivot away from small time terrorists to demonizable governments that are better for business.

We need a Department for defense against the war mongers. In its absence we’ll have to do the job ourselves.