The “Wall Of Vets” Continue Long Legacy Of Veteran Activism 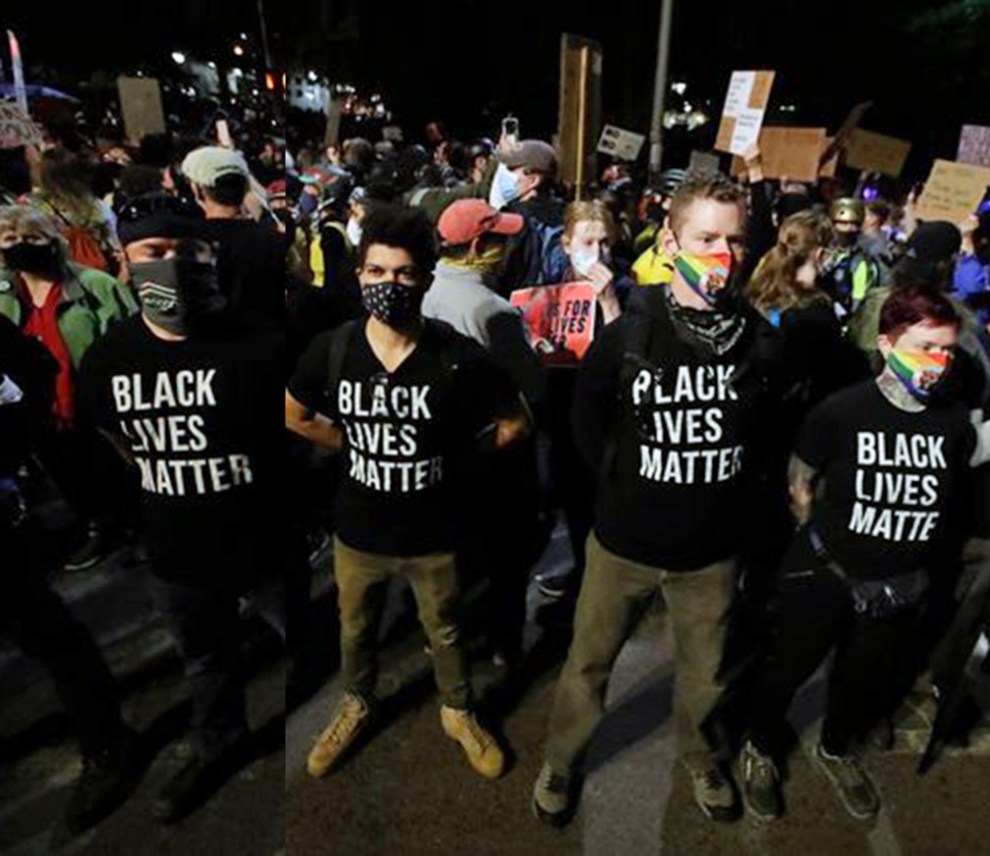 Military veterans have long been resisting war, promoting positive peace, and defending human and civil rights against state violence and other forms of oppression. They have made significant contributions to the antiwar and peace and justice movements over many decades.

Their participation in the Black Lives Matter (BLM) movement is no different. Veterans have been highly visible in supporting the racial justice demands of Black, Indigenous, and People of Color (BIPOC) communities. The disturbing truth, which a great number of veterans recognize, is that white supremacy, systemic racism and police brutality at home is profoundly connected to and fueled by U.S. imperialist militarism/war abroad.

With this knowledge, veterans have taken on roles as nonviolent warriors to educate about those connections and help underrepresented and marginalized communities fight injustice. One of the most recent manifestations of this activism is the ‘Wall of Vets’ in Portland, OR, a group of veterans that assembled in response to the deployment of federal paramilitary units to that city and the violent attacks they perpetrated against antiracism protestors.

Prior to the movement for Black Lives, veterans, including combat veterans, engaged in nonviolent social change initiatives in myriad ways and for various causes. For example, in 1967, Vietnam Veterans Against the War (VVAW) formed to oppose and demand an end to the illegal Vietnam War.

Their protest efforts continued during the early 1970s across multiple campaigns within the antiwar movement. One of the most significant was the 1971 Mayday protest, a large-scale civil disobedience action against the war that aimed to shut down government offices on Capitol Hill.

During the 1980s, activist veterans spoke out against U.S. interventionism.

On September 1, 1986, three veterans, including Congressional Medal of Honor recipient Charles Liteky (for courage under fire, personally rescuing 20 American soldiers pinned down under heavy attack in Vietnam), undertook a water-only “Vets Fast for Life” on the Capitol steps, asking America to not allow an invasion of Nicaragua.

In 1987, a three-month vigil was held outside Congressional hearings to oppose the Reagan administration’s illegal and unconstitutional military intervention in Central America. Later that year in Concord, CA, veterans undertook a hunger strike and peaceful blockade of munitions trains carrying weapons bound for Nicaragua and El Salvador.

In the course of the protest, S. Brian Willson, a Vietnam veteran and one of the three who had done the Vets Fast for Life, had his legs amputated by a train that refused to stop.

During the 1990s, veterans were particularly focused on stopping the growth and expansion of U.S. imperialism, including the Persian Gulf War, the Cuban trade embargo, and economic sanctions against Iraq.

Veterans have been extremely active in the post-9/11 era as well, with direct action efforts focused primarily on opposing the so-called “War on Terror,” especially the USA PATRIOT Act and U.S.-led wars and occupations in the Middle East. In 2002-03, a large number of veterans were involved in antiwar protests across the country, attempting to halt the proposed invasion of Iraq, which many veterans knew to be unwise and based on lies.

In 2005, veterans joined Cindy Sheehan, mother of killed soldier Casey Sheehan, and other peace activists at “Camp Casey” in Texas to demand truth from President Bush about the illegal and disastrous Iraq War.

In 2010, veterans, including Pentagon Papers whistleblower Daniel Ellsberg, performed a civil disobedience action outside the White House to protest the U.S. wars in Afghanistan and Iraq.

Veterans contributed to the Native-led Standing Rock campaign in 2016-17. Thousands of veterans deployed to North Dakota to support Native American resistance to state and corporate violence on sacred treaty lands.

During recent BLM protests in Portland, which only intensified when the Trump administration sent federal agents to confront them, Mike Hastie, a Vietnam veteran and member of Veterans For Peace (VFP), attempted to warn the officers about the atrocities that are committed in war. For this effort, he was pepper-sprayed at close range and pushed away.

Inspired by Chris David, the Navy Veteran who was physically assaulted by federal police last month outside a Portland courthouse, the ‘Wall of Vets’ grew as a nonviolent peace force who put up their bodies as shields in defense of the people’s right to peacefully assemble and protest. The veterans assert that they are continuing to fulfill their oaths to the Constitution and to the people of the USA by protecting their First Amendment rights.

As with veterans who preceded them in earlier movements and campaigns against state violence, the ‘Wall of Vets’ are using the privilege of their status as veterans to amplify the voices of the oppressed.  The ‘Wall of Vets’ is one of the latest examples of veterans coming together and using their platform to shine a light on the unjust treatment of our most under-resourced communities. They have united with other human ‘walls’ (e.g., the ‘Wall of Moms’) that have formed in response to Trump’s tyrannical tactics.

The veterans are now actively forming chapters in other cities, which will allow for an expanded commitment to prevent and stop violent attacks against peaceful antiracism protestors by Trump’s militarized police units.

Deterring and suppressing political dissent and nonviolent civil disobedience is a favorite power and control tactic of governments. Veterans are mindful of the crimes that an authoritarian government and occupying military force are capable of. They know that we have a civic duty to stand up to these existential threats to democracy, freedom and liberty.

Veterans join struggles for peace and justice for a variety of reasons. For some, it is a cathartic exercise for inner peace and healing. For others it is a calling to protect and serve vulnerable communities from an abusive corporation or government. For others still, it is about atoning for doing their government’s bidding as a tool for empire-building and war profiteering. For some, it is a nonviolent continuation of their defense of the US people and our Constitution.

For many veterans, it is some combination of these motivations as well as others. But whatever compels them to defend human and civil rights and fight for peace, they do so with moral strength and in genuine service to others. The ‘Wall of Vets’ have demonstrated that they are most certainly continuing that long and important legacy through their peace work.

Brian Trautman is an Army veteran, social justice activist, and educator based in Albany, NY. On Twitter and Instagram @brianjtrautman.