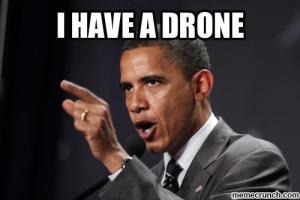 By “the Obama wars” I don’t mean some overgrown infants on television screaming racist insults or pretending that opposing racism requires cheering for Obama.

Obama’s legacy, despite all sorts of variations, many of them superficial, and despite its role in defeating Hillary Clinton at the ballot box, has largely been maintained, advanced, and imitated by bipartisan consensus and by Donald Trump.

If you want to review what Obama did in that quirky little area of his job to which some 60% of federal discretionary spending is devoted, and which puts us all at risk of nuclear disaster, pick up a copy of Jeremy Kuzmarov’s book Obama’s Unending Wars: Fronting the Foreign Policy of the Permanent Warfare State. Kuzmarov places Obama in historical context and outlines his parallels with Woodrow Wilson, another extreme militarist generally understood as a peace visionary. Kuzmarov reviews — and adds information that many of us probably never knew to — the story of Obama’s rise to power and the story of all of his many wars.

We tend to forget that right up through the presidency of George W. Bush wars were thought of as temporary things that had endings. Now they’re hardly thought of at all, but they’re understood to be permanent. And they’re thought of in partisan terms. We sometimes forget that candidate Obama, like candidate Trump, promised a larger military. Candidate Obama promised a larger war on Afghanistan. And when it came time for Obama’s re-election to a second term, he reached out to the New York Times and asked that paper to write an article about how good he was at killing people, about how he carefully studied a list of men, women, and children and picked out the ones in whose name he would send missiles into clusters of unidentified victims. Obama’s claim, in his own words, was “I’m really good at killing people.” Nobody who liked Obama and didn’t like murder allowed themselves to become aware of this aspect of Obama’s re-election campaign; and they never will become aware of it.

The reason it matters is that over 20 Democrats are now campaigning for president, some of whom are promoting the same sort of militarism, some of whom are opposing it to some degree, and some of whom have revealed little or nothing about their positions on such matters. One of them, Joe Biden, was part of Obama’s wars. Biden is the guy who claimed of the mass-slaughter of people in Libya “We didn’t lose a single life.” Kamala Harris is the woman who will never ever question whether by “life” he meant “non-African life.” She’s too busy worrying that peace might break out in Korea. The stupidity of tokenism will plague us until we at least have the decency to regret having fallen for it before. The stupidity of militarism will plague us until we stop glorifying and excusing it and start supporting efforts to create peace.