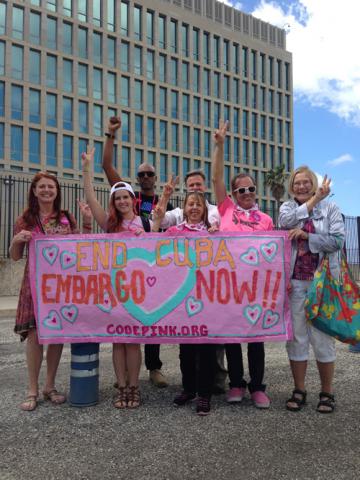 Here’s a preview of a new, 3-part mini-series:

I’ve seen the first part. It’s only 12 minutes. The series was made in Cuba by Cubans and non-Cubans working together, and executive producers are Oliver Stone and Danny Glover. It’ll be on Youtube on Friday, October 9th on the Belly of the Beast channel. The series has the unfortunate title “The War on Cuba.”

Of course, what the U.S. government does to Cuba is not actually a war, and that’s important, and we should be very glad it isn’t a war, that bombs are not falling on Havana, that Guantanamo’s torture chambers are not being expanded nationwide. The all-too-common, virtually unnoticeably normal abuse of the word “war” as a metaphor is probably a symptom of Western culture ignoring actual wars — yes, Fidel Castro called it a war too. But what the U.S. government does to Cuba is deadly, abusive, immoral, and an act of illegal collective punishment. Here’s a summary of what’s involved.

The first episode is called We Can’t Vote in Your Elections. In it we meet some people impacted by the U.S. blockade of Cuba: people who need prosthetic legs and can’t buy them, people who need tourist business that has disappeared since Trump showed up, people who need bank loans, access to the full internet (something the Cuban government is also against), people who need prescription drugs, etc.

The fact is that Obama did something right for once in opening up trade and travel with Cuba. And I visited Cuba and wrote about it and posted lots of photographs. And Trump undid it. We see footage in this film of Cubans predicting that Trump would be good for Cuba because he wanted to do business there. But Trump let Marco Rubio set his vicious policy, and Trump now campaigns on blockading Cuba — even bragging (this is not in the film but just happened recently) about receiving a “Bay of Pigs Award.”

Trump and Coronavirus have hit Cuba like twin disasters, even if cutting back on U.S. travel has probably mitigated the spread of Coronavirus there. Even a Chinese billionaire was unable to get ventilators for Cuba past the U.S. blockade. That alone is a deadly policy outcome that looks especially awful to a world largely appreciative of Cuba sending doctors to assist on various continents.

Trump has made it harder to send money to Cuba and shut Cuban players out of Major League Baseball. What on earth can be the point, the purpose, the motivation?

One problem is that the U.S. Congress does nothing, so U.S. presidents behave as kings, creating new policies and undoing them at will. But the most outrageous problem is that sadistic will. The U.S. blockade of Cuba is the single longest-lasting trade embargo in world history — or so this film claims, although the U.S. has not had open unembargoed trade with North Korea since it created North Korea.

Blockading Cuba for decades has done nothing to improve the world or the United States or Cuba in any way. It has also done nothing to overthrow the Cuban government. Celebrating a laughably failed invasion that the CIA meant to use to start an actual war, and continuing to punish the Cuban people for living in Cuba after the Cuban revolution would be ridiculous if it were not creating lines hours-long of people hoping to buy food.

U.S. school children to this day can read in text books about the “Spanish-American War,” and the “liberation” of Cuba. The mast of the USS Maine stands at the U.S. Naval Academy and a monument to it in Columbus Circle, New York City, and bits and pieces of that ship in countless memorials all over the United States, where war lies are an honored heritage unless a massive uprising like Black Lives Matter challenges some particular examples.

Speaking of which, when the Trump regime decided to re-strengthen the blockade, we were simultaneously treated to bizarre stories of Cuba using mysterious high-tech noise weapons. What, if anything, led to the collective fantasy behind the stories is unclear. That there was no weapon involved is clear. That the story would have been told very differently, if told at all, had it happened in another part of the world is crystal clear. That vastly more people in the United States heard the accusations than the corrections is clear and typical.

The United States has one and only one duty toward Cuba: Stop trying to hurt the people who live there. The benefits will be human, cultural, and economic. The downside does not exist.

If he were ever actually president, Joe Biden would have to acknowledge having said he would return to Obama-era policies. Of course, he would make sure to demonize Russia in the process, if he actually did Cuba any good — but it seems just possible.