The Biggest Winner In Canada’s Election Is The Military 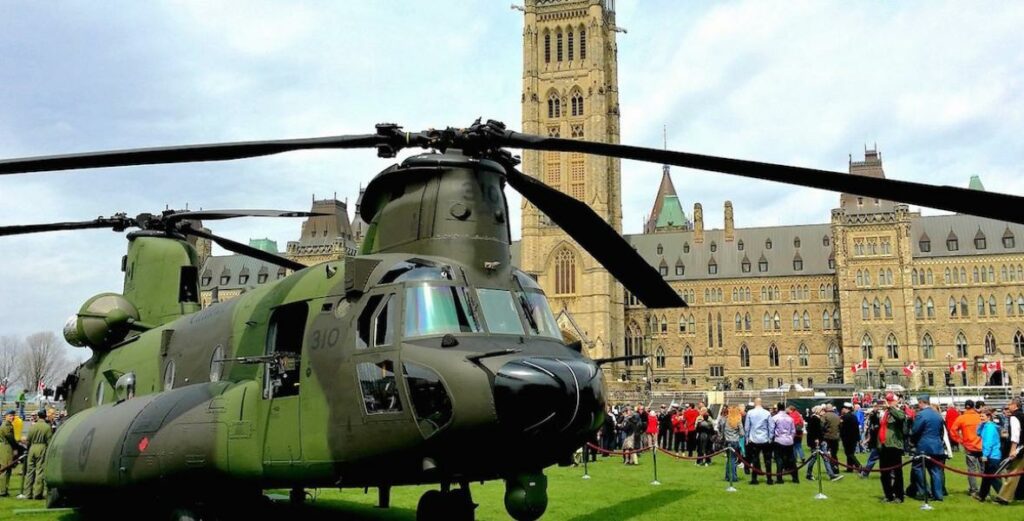 No matter who takes the reins of Parliament next week, perhaps the biggest winner in Canada’s 2019 federal election will be a conglomerate of military industries and the war department.

Indeed, the platforms of all major parties — Liberals, Conservatives, NDP and Greens — guarantee that an astounding outlay of public funds will continue flowing to war profiteers courtesy of a militarist orthodoxy equally adhered to by all. As with any religion, there is with the Canadian military an unquestioned faith in certain basic assumptions that can never be questioned or tested against the scientific evidence at hand.

In this instance, the militarist religion assumes that the war department serves a socially useful purpose and a benevolent global role even when there is no documentation to show that endless billions spent on weaponry, war games, drone killings, and armed invasions have ever created peace and justice. One very popular symbol of this faith is the wearing of red poppies every November. Newscasters who are supposed to be objective observers wear them without question, yet if a CBC reporter were to wear a white poppy for peace, that would be viewed as heresy and cause for dismissal.

The trust that Canadians place in this orthodoxy can only be attributed to a deep level of cognitive dissonance. The Canadian military is an organization that has been found complicit in torture in Somalia and Afghanistan as well as within its own ranks; the war department has named Indigenous land defenders as a major security threat; the institution itself is regularly on call to put down instances of public dissent, especially when Indigenous people stand up for their rights, from Kanesatake to Muskrat Falls; the military is rife with a crisis of violence against women; it chews up and spits out veterans who must fight for the most basic of rights when they come home injured from battle; and it is the single-largest federal government contributor to climate change.

During an election when each party has felt the need to address climate change — all have platforms that are not up to the challenge, according to the environmental group Stand.earth — not a single leader is willing to speak about the federal government own research, which finds that the Canadian military is far and away the largest government emitter of greenhouse gas emissions. In fiscal year 2017, that amounted to 544 kilotons, more than 40 per cent greater the next government agency (Public Services Canada) and almost 80 per cent more than Agriculture Canada.

This finding is consistent with related research that illustrates the Pentagon’s role as the single-biggest contributor to greenhouse gas emissions stateside. According to a recent report from Brown University:

“Between 2001 and 2017, the years for which data is available since the beginning of the war on terrorism with the U.S. invasion of Afghanistan, the U.S. military emitted 1.2 billion metric tons of greenhouse gases. More than 400 million metric tons of greenhouse gases are directly due to war-related fuel consumption. The largest portion of Pentagon fuel consumption is for military jets.”

Notably, militaries have long sought to be exempt from restrictions on greenhouse gas emissions. Indeed, at the 1997 Kyoto climate talks, the Pentagon ensured that emissions from militaries would not be included among those institutions required to rein in their contribution to global heating. As the Transnational Institute pointed out on the eve of the Paris summit in 2015, “Even today, the reporting each country is required to make to the UN on their emissions excludes any fuels purchased and used overseas by the military.”

Under the non-binding Paris agreement, that automatic military exemption was lifted, but countries are still not required to cut their military emissions.

Meanwhile, regardless of who wins on Monday, it’s the generals at the war department and the CEOs of major weapons manufacturers who are licking their chops. Few Canadian voters realize that hundreds of billions of their tax dollars will be committed to corporate welfare projects to build warships at a cost of at least $105 billion and fighter bombers that at base cost $25 billion (likely much higher, given that military industries traditionally underbid and overcharge). Neither collection of war toys is needed, but the orthodoxy of Canadian militarism states that whatever our men and women in uniform think they need, they’ll get. Even though the means of killing people are already more than lethal enough, the new high-tech war machinery is craved by the generals and CEOs like a drug fix.

As reporters question how promises for socially beneficial things can be paid for — like ensuring justice for 165,000 Indigenous children who continue to face government-sanctioned racial discrimination or building affordable housing or eliminating student debt — they never ask where the parties hope to dredge up the $130 billion-plus to be spent on the next generation of killing machines. Nor do they question the annual outlandish theft of the public treasury, in which the Canadian war department will continue to enjoy its standing as the largest beneficiary of discretionary government spending at $25 billion annually and growing (discretionary means there is no legislative requirement for this bloated bureaucracy to receive a single penny).

Even if this issues were to be brought up in public debate, the Jagmeet Singhs and Elizabeth Mays of the campaign would join the Trudeau-Scheer chorus, chiming in about heroism and how great it is to call on soldiers to help fight the effects of climate change as witnessed during forest fires or floods. But civilians can just as easily do this work, and they wouldn’t need the specialized training in murder that is the core mandate of the war department. Indeed, in one of those rare moments of candour, former warlord Rick Hillier famously commented that “We are the Canadian Forces, and our job is to be able to kill people.” The late NDP leader Jack Layton — who, notably, never sought to rein in or cut military spending while in Ottawa — praised Hillier for his comments, noting: “We have a very committed, level-headed head of our armed forces, who isn’t afraid to express the passion that underlies the mission that front-line personnel are going to be taking on.”

While the Liberals have been clear that they would like to increase war spending by 70 per cent over the next decade and the Conservatives, as always, can be expected to maintain high levels of military spending along with the purchase of bombers and warships, the NDP and Greens are plainly falling into line with this huge investment in climate-killing warfare.

The NDP’s Green New Deal is expected to result in investments of $15 billion over four years: that’s $85 billion less than what they will invest in a war department whose climate change emissions, at over 500 kilotons a year, will seriously diminish any gains made under the NDP’s plan. In addition, the NDP is satisfied to spend an additional $130 billion-plus on warships and bombers. The “New Deal for the People” is the same old deal for the war industry. Like all politicians, they don’t say how much it will cost when they write in their platform:

“We will keep shipbuilding procurement on-time and on-budget, and ensure that the work is spread out fairly across the country. Fighter jet replacement will be based on a free and fair competition to make sure that we get the best fighters to meet Canada’s needs, at the best price.”

But for a party that presumably builds its platform on evidence-based decision-making, no case is made for what bombers are the “best” for Canada’s unquantified “needs.” Sadly, the NDP trots out the same tired canards that have sustained over a century of Canadian mythmaking about the alleged beneficence and honour of an always well-funded institution, even contributing to the lie that the war department has been mistreated and poorly funded. “Unfortunately, after decades of Liberal and Conservative cuts and mismanagement, our military has been left with outdated equipment, inadequate support and an unclear strategic mandate.”

The Greens are no better, sounding like right-wing Republicans in declaring:

“Canada now needs a general purpose, combat-capable force that can provide realistic options to the government in domestic security emergencies, continental defence and international operations. This includes protecting Canada’s northern borders as Arctic ice melts. A Green government will ensure that the Canadian Armed Forces are prepared to serve in both traditional and new capacities.”

Translated into reality, what does this mean? Domestic security emergencies constitute incidents like the armed invasion of sovereign Indigenous territories like Kanesatake (i.e. Oka) and the area around Muskrat Falls or repressing dissenters at international summits. Canada’s international operations have traditionally involved maintaining systems of inequality and injustice, bombing other human beings, and illegally occupying other countries. They also involve junket-style war games in exotic destinations. The Canadian navy regularly plays war games with NATO in the Mediterranean instead of dedicating its considerable resources to rescuing refugees facing certain death in that perilous crossing.

The Greens also sounds like Donald Trump when they opine that: “Canada’s commitments to NATO are firm but underfunded.” While Elizabeth May has stated she would like NATO to abandon its reliance on nuclear weapons, she would still support being a member of an organization whose main role consists of illegally invading countries across the globe as long as they used so-called “conventional” weapons.

The Greens also support the imperial mandate of the UN known as “duty to protect,” the so-called humanitarian guise under which, for example, Canada took part, with unanimous NDP-Liberal-Conservative support, in the bombing of Libya in 2011.

The connections are clear

All war zones are sites of environmental catastrophe and ecocide. From the use of defoliants to destroy trees and brush in Southeast Asia to the traumatic destruction of forests during both world wars to the use of depleted uranium in Iraq and Afghanistan to the ongoing testing and use of chemical, biological, and nuclear weapons, all life forms on the planet are under threat from militarism.

As millions march in the streets to protest inaction on climate change, the popular sign calling for system change is one that is conveniently ignored by all of Canada’s major federal party leaders. They seek at best merely to tinker with a dangerous system and unfortunately, accept assumptions that will doom any effort to reduce our carbon footprint. Nowhere is that more clear than in their collective commitments to Canadian militarism and war profiteers.

The late Rosalie Bertell’s landmark work on nuclearism documents much of the destruction of militarism. Her final book, Planet Earth: The Latest Weapon in War, begins with a simple plea that would be wonderful to see reflected in party platforms in an age of mass extermination: “We must set up a cooperative relationship with the Earth, not one of dominance, for it is ultimately the gift of life that we pass on to our children and the generations to follow.”

Matthew Behrens is a freelance writer and social justice advocate who coordinates the Homes not Bombs non-violent direct action network. He has worked closely with the targets of Canadian and U.S. “national security” profiling for many years.