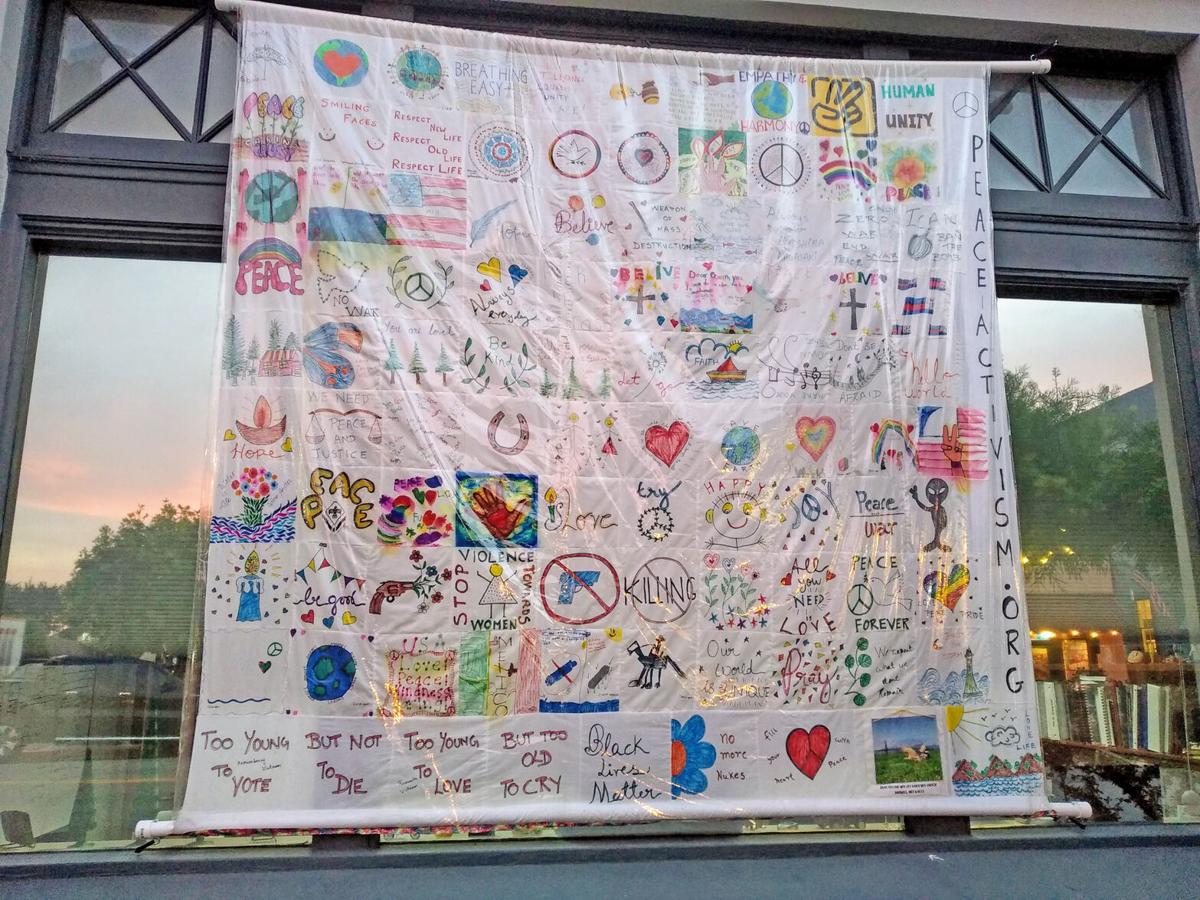 To promote peace and activism messages, Half Moon Bay has hung a flag outside City Hall made by students highlighting their ideas of peace that will eventually travel to the United Nations in 2021.

The flag, hung on Dec. 9, is an art collage of messages for peace addressing topics like guns, war, violence against women and climate change. The flag is a collection of individual canvases stitched together and made from cotton, old clothes and towels. The individual canvas submissions came from students in schools throughout Half Moon Bay who drew and wrote about their peace ideas over the past few months. The flag will continue to grow as more people submit canvas messages. The flag currently hangs on the wall outside the City Hall building and currently has 100 canvases stitched together. In September, the flag at City Hall will be taken down and presented to the United Nations in New York City.

The flag is part of the Peace Flag Project, which works towards world peace and banning nuclear weapons. The Peace Flag Project is also working on the project in conjunction with the International Campaign to Abolish Nuclear Weapons, or ICAN. Runa Ray, a fashion environmentalist and peace activist, is the organizer of the Peace Flag Project. Ray uses fashion and activism to advocate for policy change. She decided to start the project in Half Moon Bay after talking with residents about peace. She talked to many people who did not have a clear concept of what peace meant to them or knew how to describe it. She believes the project will be a community collective using art as activism to speak about peace.

“I realized that peace education needs to start at the grassroots level, and it may sound like a fun and interesting project, but it is something deeper because you have an individual that’s commenting on that canvas what peace means to them and how they perceive the world to be better in their own eyes,” Ray said.

Her work in the past has focused on climate change activism, but she realized there would be no use fighting to stop climate change unless she worked on peace between countries and people. She wants to combine peace and climate action ideas to find solutions for what peace looks like for everyone. She initially approached the city of Half Moon Bay about the project this year. The Half Moon Bay City Council passed a resolution at its meeting on Sept. 15 offering its support for the project. The city highlighted the project, encouraged the community to get involved and offered up a public space to hang the flag.

Ray then approached schools and got them involved with the project. Students from Hatch Elementary School, Wilkinson School, El Granada Elementary School, Farallone View Elementary School, Sea Crest School and Half Moon Bay High School have participated. Other organizations involved included the California chapter of World Beyond War, an antiwar organization, and the United Nations. Ray has also received art from people throughout the United States. With the flag now hanging at City Hall, she plans to engage more people in Half Moon Bay to get more canvas submissions. Although they already have more than 1,000 canvas submissions, she hopes lots of people will come down to City Hall and write down their vision of peace so she can include it in the flag mural.

“I want people to start wanting to partake in the project. It really costs nothing; it’s only just your time,” Ray said.

People can go to https://peace-activism.org for more information about the flag and the Peace Flag Project.