Sleepwalking to War: NZ Is Back Under the Nuclear Umbrella 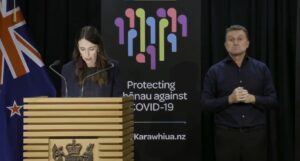 As Minister of Disarmament in the 1999-2002 Labour-Alliance Coalition, I had the authority of government to state that New Zealand would not be part of any nuclear armed military bloc.

Furthermore, I was authorised to state that we would pursue an independent foreign policy and we would not march off to almost every war launched by Great Britain and then the United States – our “traditional” allies.

As minister responsible for overseas development aid, I refused to join in the clamour denouncing China’s aid programmes in the Pacific.

As I repeated to the frequent breathless media enquiries about Chinese expansionism, China had very right to forge ties with the sovereign countries of the Pacific, and if influence was their aim, the earlier European colonisers, New Zealand included, had made it a difficult marketplace for them. I did not consider, as the current prime minister does, that the Pacific was our “backyard.

I give these two examples because, without public discussion, the Labour Government, like National before it, has drawn us into the largest nuclear-armed military alliance in the world, Nato, and has signed up to the encirclement strategy of Russia and China.

I doubt if most of the Cabinet members have read, or are even aware of, the partnership agreements signed with Nato. 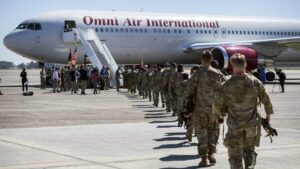 US Army infantry are deployed to Eastern Europe to reinforce Nato allies there, as the Ukraine crisis worsened in early March. (Stephen B. Morton)

In the 2010 Individual Partnership and Cooperation Programme, they will find that New Zealand is committed to “enhancing inter-operability and enabling support/logistics cooperation, which would further assist the New Zealand Defence Force engagement in any future Nato-led missions”.

Hopefully, they will be astonished at this seemingly open-ended commitment to engage in Nato-led wars.

In the agreements, much is made of working with Nato, militarily, across the globe in many military missions.

This is the same Nato that began life in 1949, supporting the suppression of the colonial liberation movements, dismembering Yugoslavia and conducting an illegal bombing campaign of 78 days, and with many of its members joining the illegal invasion of Iraq.

In its 2021 Communique, which I see no evidence of Cabinet members having read, Nato boasts that its nuclear arsenal is ever expanding, that it is committed to containing Russian and China, and praises New Zealand for joining in the strategy of encircling China.

In the same document, the Treaty on the Prohibition of Nuclear Weapons, a key commitment for New Zealand, is denounced. 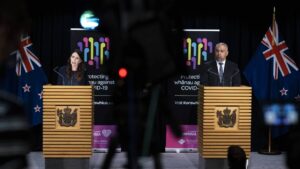 The 2021 NZ Defence Assessment is straight out of the Nato Communique.

Despite evoking Māori whakatauki for peace, it urges the government to become an active participant in the US-led containment strategies of Russia and China and to upgrade the military capability significantly.

The term Indo-Pacific has replaced Asia-Pacific. New Zealand is effortlessly placed into the US strategy of encircling China, from India to Japan, with New Zealand a junior partner. War beckons.

And that brings us up to the war in Ukraine. I would urge Cabinet members to read the 2019 Rand Study called “Overextending and Unbalancing Russia”. This will help to give context to the present war.

Cabinet, before building on the military already deployed to Nato and conceding Defence Minister Peeni Henare’s plea to send missiles, should realise that this war began a long time before Russian forces pushed past the Donbas into Ukraine.

Cabinet needs to consider the promises in 1991 that Nato would not expand to the East and certainly not to threaten Russia.

Thirteen member states are now 30 with three more set to join. The Minsk 1 and 2 Agreements of 2014 and 2015, forged by Russia, Ukraine, Germany and France, which recognised the Donbas regions of Ukraine as autonomous regions, are fundamental to understanding the current war. 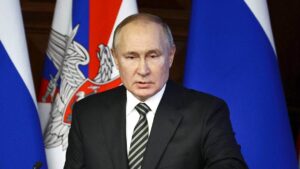 Russian President Vladimir Putin addresses a December 2021 meeting of the Russian Defence Ministry Board, during the build-up to his country’s invasion of Ukraine, following years of stalled peace negotiations. (Mikhail Tereshchenko/AP)

They were violated before the ink was dry with continuous heavy fighting between Ukrainian armed forces, nationalist and neo-fascist militias and the armed forces of the Russian- speaking autonomous republics.

Over 14,000 lives have been lost in this inter-Ukrainian war.

The Minsk Agreements, the internal Ukrainian divisions, the overthrow of the democratically elected government of President Yanukovych in 2014, and the role of the US and well- funded neo-Nazi groups in that event; the refusal of the US to restore the intermediate-range nuclear weapons treaty with Russia; the stationing of those weapons in Romania, Slovenia and now Poland (like Cuba so close to a major superpower) – all these should be discussed by Cabinet so that we develop our policy on the Ukraine by understanding the complexities.

Cabinet needs to step back in what seems to be a rush to war under the nuclear umbrella.

It needs to study the plethora of US and Nato strategy documents, on the public record and not part of some clever Russian disinformation campaign as some would have it, that have planned for Russia being embroiled in a war with a well-armed and well-trained Ukrainian military with its shock troops of neo-Nazis. 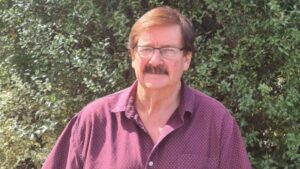 Matt Robson was the Minister of Disarmament and Arms Control and the Associate Foreign Minister in the 1999-2002 Labour-Alliance coalition. (Stuff)

And then, Cabinet needs to realise that the even bigger target for Nato is China.

New Zealand has been drawn into that game plan as part of the ring of countries, either nuclear-armed or under the protection of nuclear armed countries, that the United States is thrusting in the face of China.

If we are to adhere to the principles enshrined in the hard won 1987 Nuclear Free Zone Arms Control and Disarmament Act, we should withdraw from the partnership with nuclear-armed Nato and its aggressive war plans, and join, with clean hands, and return to the independent foreign policy that I was proud as a minister to promote.

Matt Robson is an Auckland barrister, and a former Minister of Disarmament and Arms Control and Associate Foreign Minister. He is a member of the Labour Party.