Reforming the Charter to More Effectively Deal with Aggression

(This is section 36 of the World Beyond War white paper A Global Security System: An Alternative to War. Continue to preceding | following section.) 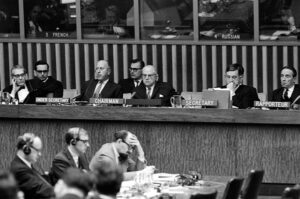 The United Nations Charter does not outlaw war, it outlaws aggression. While the Charter does enable the Security Council to take action in the case of aggression, the doctrine of the so-called “responsibility to protect” is not found in it, and the selective justification of Western imperial adventures is a practice that must be ended. The UN Charter does not prohibit States from taking their own action in self-defense. Article 51 reads:

Nothing in the present Charter shall impair the inherent right of individual or collective self-defence if an armed attack occurs against a Member of the United Nations, until the Security Council has taken measures necessary to maintain international peace and security. Measures taken by Members in the exercise of this right of self-defence shall be immediately reported to the Security Council and shall not in any way affect the authority and responsibility of the Security Council under the present Charter to take at any time such action as it deems necessary in order to maintain or restore international peace and security.

Further, nothing in the Charter requires the UN to take action and it does require the conflicting parties to first try to settle the dispute themselves by arbitration and next by action of any regional security system to which they belong. Only then is it up to the Security Council, which is often rendered impotent by the veto provision.

As desirable as it would be to outlaw forms of warfare including making war in self-defense, it is hard to see how that can be achieved until a fully developed peace system is in place. However, much progress can be made by changing the Charter to require the Security Council to take up any and all cases of violent conflict immediately upon their commencement and to immediately provide a course of action to halt hostilities by means of putting a cease fire in place, to require mediation at the UN (with the aid of regional partners if desired), and if necessary to refer the dispute to the International Court of Justice. This will require several further reforms as listed below, including dealing with the veto, shifting to nonviolent methods as the primary tools, and providing an adequate (and adequately accountable) police power to enforce its decisions.