(This is section 22 of the World Beyond War white paper A Global Security System: An Alternative to War. Continue to preceding | following section.) 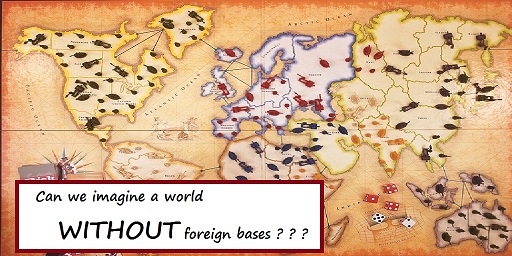 Can we imagine a world WITHOUT foreign bases ? ? ?
(Please retweet this message, and support all of World Beyond War’s social media campaigns.)

In 2009 the U.S. lease on an air base in Ecuador was set to expire and the president of Ecuador made a proposal to the U.S.

We’ll renew the base on one condition: that they let us put a base in Miami.

The U.S. refused the offer.

The British people would find it unthinkable if their government allowed Saudi Arabia to establish a large military base in the British Isles. Similarly, the United States would not tolerate an Iranian air base in Wyoming. These foreign establishments would be seen as a threat to their security, their safety and their sovereignty. Foreign military bases are valuable for controlling populations and resources. They are locations from which the occupying power can strike inside the “host” country or against nations on its borders, or possibly deter attacks. They are also frightfully expensive for the occupying country. The United States is the prime example, having hundreds of bases in 135 countries around the world.note5 Foreign bases create resentment against what is seen locally as imperial domination.note6 Eliminating foreign military bases is a pillar of an Alternative Global Security System and goes hand-in hand with non-provocative defense. 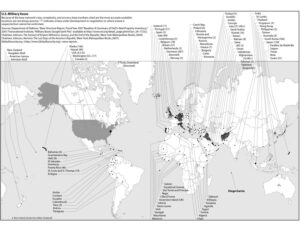 Withdrawing to an authentic defense of a nation’s borders is a key part of demilitarizing security, thus weakening the ability of the War System to create global insecurity. As an alternative, some of the bases could be converted to civilian use in a “Global Marshall Plan” as country assistance centers. (See below.)

Notes:
5. The actual total seems to be unknown; even Defense Department figures vary from office to office, and for some reasons their official numbers do not count the bases in Afghanistan (estimated at 400), Iraq, or Saudi Arabia, or the covert bases established by the CIA. Military mystery: How many bases does the U.S. have, anyway? by Gloria Shur Bilchik / January 24, 2011. http://www.occasionalplanet.org/2011/01/24/military-mystery-how-many- bases-does-the-us-have-anyway/(return to main article)
6. Osama bin Laden’s stated reason for his horrific terrorist attack on the World Trade Center was his resentment against American military bases in his home country of Saudi Arabia.(return to main article)