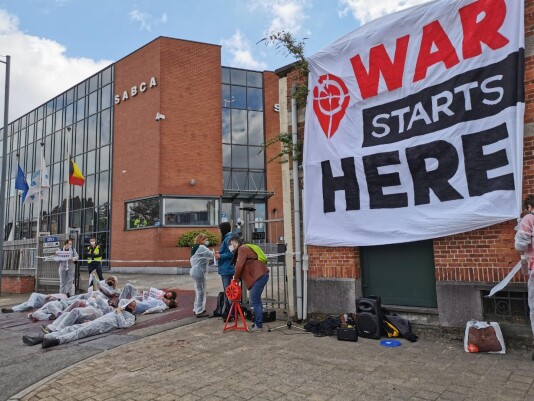 Since the start of the Corona crisis, the Belgian government has handed out 316 million euros to the military aircraft industry, research from the peace organisation Vredesactie shows.

Today peace activists climbed onto the roof of the Belgian arms company Sabca, unfurled a banner and spread ‘blood’ at the gate. The activists denounce the export of Belgian arms to the conflicts in Libya, Yemen, Syria and Nagorno-Karabakh.

Today, activists at the Sabca factory gate highlight the deadly consequences of that export policy.

Sabca was taken over by the Belgian government in 2020 through the investment fund FPIM.

“The FPIM has been investing in the military aviation sector for years,” says Bram Vranken of Vredesactie. “Since the Corona crisis, the arms industry has received millions of euros in state aid.”

According to research by Vredesactie, the federal and Walloon governments have together provided 316 million euros in support to Belgian arms companies since the start of the Corona crisis. This is done without any checks on whether these companies are involved in human rights violations.

Both through the arms export itself, and through investments, our governments are helping to maintain the conflicts in Yemen, Libya, Nagorno-Kharabakh and the occupation of Western Sahara. War literally starts here at Sabca.