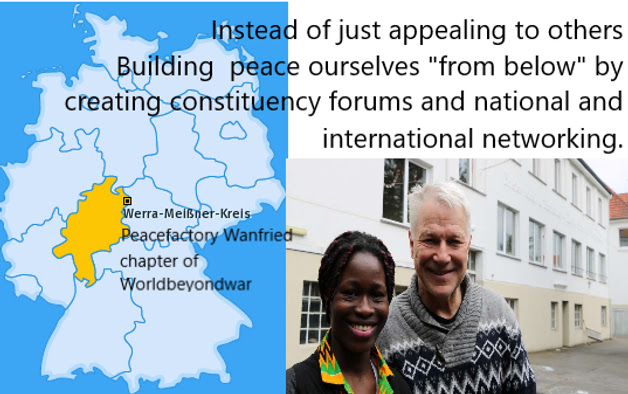 The danger of war is now also growing here in Germany. War has migrated to the global south since 1945. It has cost the lives of many people there and continues to do so daily. As in the Second World War in Europe, many cities were and are being destroyed there. Now it could come back. If we are not careful!

There is now discussion in the Biden administration about an open confrontation between the U.S. and China and Russia. In the news we get the changed tone. The U.S. is also trying to drag Europe into this confrontation.

There is a proposal in the Biden administration to destroy the Chinese merchant and military fleet with a blitzkrieg. The U.S. has the destructive potential to do this and has already encircled China and Russia with military bases and warships.

However, we should not believe that only Chinese and Russians will die in this war. Putin already made it clear during the Ukraine crisis that if the USA attacked us, we would have nuclear weapons. The confrontational policy we are pursuing now carries the risk of a nuclear world war and the destruction of the earth’s habitability.

After 1945 we had peace in almost all industrialized countries, but not in the world. War suffering migrated to the global South. However, the North was and is almost always involved in these wars, with direct military interventions, with arms sales, with support and financing of warring parties. The war of the North to control the raw materials of the global South after the victory over the colonial powers, was first waged under the cover term: fight against communism. For 20 years now – after the end of the Soviet Union – it has been waged under the cover term: war against terrorism. The aim of this war is to ensure that Western corporations and the wealthy invested with them can continue to exploit raw materials and markets worldwide for themselves. It is to be prevented that the post-colonial states use their independence to use their raw materials for the development of their countries and people.

Russia opposed Western interventions at the latest after NATO destroyed the Libyan state. It then prevented the regime change in Syria sought by the West in the next war. Russia and China are also propping up Iran against U.S. blackmail. They stand in the way of Western corporate control of the Middle East.

The U.S. also appears to be confronting its two most powerful rivals now for this reason. And they are doing so for a second reason: If everything remains peaceful, China will replace the U.S. as the number one economic power. And that will also give China more political and military power, limiting the power of the U.S. to enforce the interests of its elite. In the past 500 years, we have had a similar situation 16 times: a rapidly catching up new power threatened and threatened to overtake the previously dominant global power: In twelve of the 16 cases, war ensued. Fortunately for mankind, however, there were no weapons at that time that could threaten the survival of all mankind. Things are different today.

If I accuse mainly the USA, it does not mean that I am a defender of China and Russia. However, because of its superior military power, the U.S. alone can count on being able to intimidate other great powers through military threats. The U.S., not China or Russia, has militarily encircled the other countries. The U.S. has been at the forefront of arms spending for decades.

Rather, I defend international law. On The UN Charter prohibits force and war and the threat thereof. It commands: All conflicts must be resolved only by peaceful means. This imperative commandment was adopted in 1945 to protect us from the suffering of war that people endured in World War II. In the face of nuclear weapons, the enforcement of this precept is the life insurance of all of us today, including the U.S., Russians and Chinese.

Also, all Western military interventions have achieved the opposite of what Western politicians promised: People were and are not better off, but much worse off than before the interventions. Once again, the sentence of Immanuel Kant in his work “On Perpetual Peace” proves to be true: Peace and its conditions, such as democratic participation, social justice or the rule of law, must be enforced by the people themselves in each country. They cannot be brought from outside.

The German Nobel Peace Prize laureate Willy Brandt called on us already 40 years ago: Secure the survival of mankind, it is in danger! And he encouraged us: The justified fears of the dangers can be best met by taking part in the shaping of politics, also of foreign relations, by taking them into our citizens’ hands.

This is also our opinion from the International PeaceFactory Wanfried.

Our proposal: People of all parties, religions, skin colors, women and men stand up for peace. Isolated we can do only little: But we can join together in non-partisan, non-partisan constituency forums and work together to ensure that we are represented in our constituency by a politician* who stands for policies in the spirit of the UN Charter. And we can build international links with like-minded people in other countries, helping to build trust and understanding between peoples themselves around the world from below, which can lead to fair international compromises.

We hope to work with you. Get in touch if you want to take it up with us. It is better to light a light than only to deplore the darkness.