Building the Wanfried Peace Factory (In The Middle Of Germany) 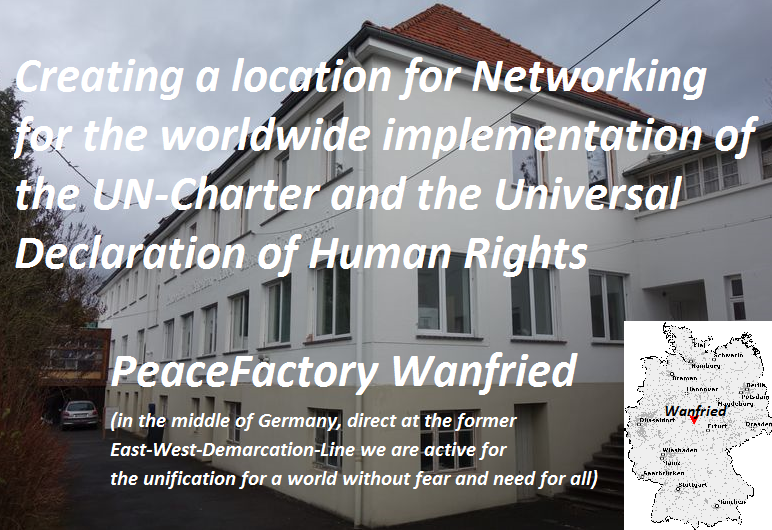 Because networking for peace needs places for personal encounters, we are building the Wanfried Peace Factory in the middle of Germany. Not only from Eschwege, Eisenach, Assbach and Kassel, but also from Düren, Goch and Menden, people come to the peace factory in Wanfried. Many of them have long been committed to peace and justice. They meet to give the peace movement a home: a former upholstered furniture factory on the former East-West border. From the center of Germany, these leaders want to contribute to networking those committed to peace, in the region, nationwide or worldwide.

Together, we want to examine information and develop creative proposals for the shaping of our societies, as well as campaigns for political decision-making.

The next meeting for the establishment of the Peace Factory will take place from 27 March (evening) to 29 March. Again Wolfgang Lieberknecht invites you to the former upholstered furniture factory in Wanfried, Bahnhofstr. 15.

The peace activists agreed on these principles in January and February 2020: With the Wanfried Peace Factory we want to create a place where people who are committed to peace can network better. This is not only about disarmament and security policy, but also about non-violent conflict resolution, the rule of law, democratization, social justice, the protection of natural resources and international understanding. Internal peace in the multiple sense is a prerequisite for peace between states.

We want to promote regional, national and international networking. In this way, we contribute to strengthening the substantive capabilities of the peace movement by promoting the exchange of information and opinions and fostering their cooperation in order to jointly gain more political weight. To this end, we want to offer workshops, set up friendly and inexpensive event rooms. As a peace factory we also want to do joint news work and educational work and bring people together to develop programmatic political measures and projects. We are also building up a peace library in the FriedensFabrik. We see ourselves less as another institution, and more as individual members of regional, nationwide and internationally active peace organizations. We will decide together about a common membership as a FriedensFabrik in nationwide and international alliances.

We are planning to form the association FriedensFabrik Wanfried. It will use the buildings of the former upholstered furniture factory in a meaningful way, so that we as humanity can move forward peacefully.

Welcome to the team for the construction and organization of the FriedensFabrik are all of us who (want to) participate in the networking for the worldwide implementation of the goals of the UN Charter and the Universal Declaration of Human Rights by peaceful means, i.e. for a peaceful, just, ecological world with dignified living conditions for all people worldwide, for a world without need and fear for all, as the UN documents describe it as a goal.

We invite you to take a peace walk across the old East-West border on 23 May 2020!

We invite all people who are committed to peace: From Russia, the USA, China and Japan, from African countries, from Germany, Europe and all countries of the world:

Let us set a clear signal together with an international walk for peace across the old East-West border: we need international meeting and cooperation, not military manoeuvres!

As realists we know that there will always be conflicts. We argue with friends and neighbors, on the city council and in companies. None of these conflicts can be solved with threats or blows. Nor do military conflicts solve conflicts. Even more than 50 million dead in World War II did not solve the problem of anti-Semitism, fascism, dictatorships and increasing military spending.

Therefore we consider the NATO maneuver “Defender 2020” (the biggest NATO maneuver in Europe for 25 years) not only a waste of money but also counterproductive. Anyone who threatens to do so makes diplomatic solutions to conflicts more difficult and thus endangers the security of all of us.

We invite all those who want to ban wars from the world as a means of conflict resolution and who advocate that all conflicts should only be resolved by peaceful means to a rally and a peace walk on 23 May in Wanfried and Treffurt. From there we want to cross the border to a joint rally on the former border. In the days before, on 21 + 22.5 we want to offer workshops on how we ourselves can strengthen peace and contribute to solving conflicts peacefully.

With this walk we also remind you that we owe it to the Russian (Soviet) government and above all to its coordinator, Michael Gorbachev, that we can now cross the border that once divided us. He believed in the possibility of overcoming confrontation with a world domestic policy and creating more strength to solve the common problems of mankind.

In doing so, he had taken up the idea that the states adopted in 1945 with the UN Charter and in 1948 with the adoption of the Universal Declaration of Human Rights: To banish war from the world once and for all and to work together in solidarity worldwide so that all people can live in dignity, all without need and fear.

Let us take a walk to pick up this thread again and contribute to building a worldwide alliance that can achieve peace.

Pass on the call, support it with your signature and let us know if you would like to support and organize this action: 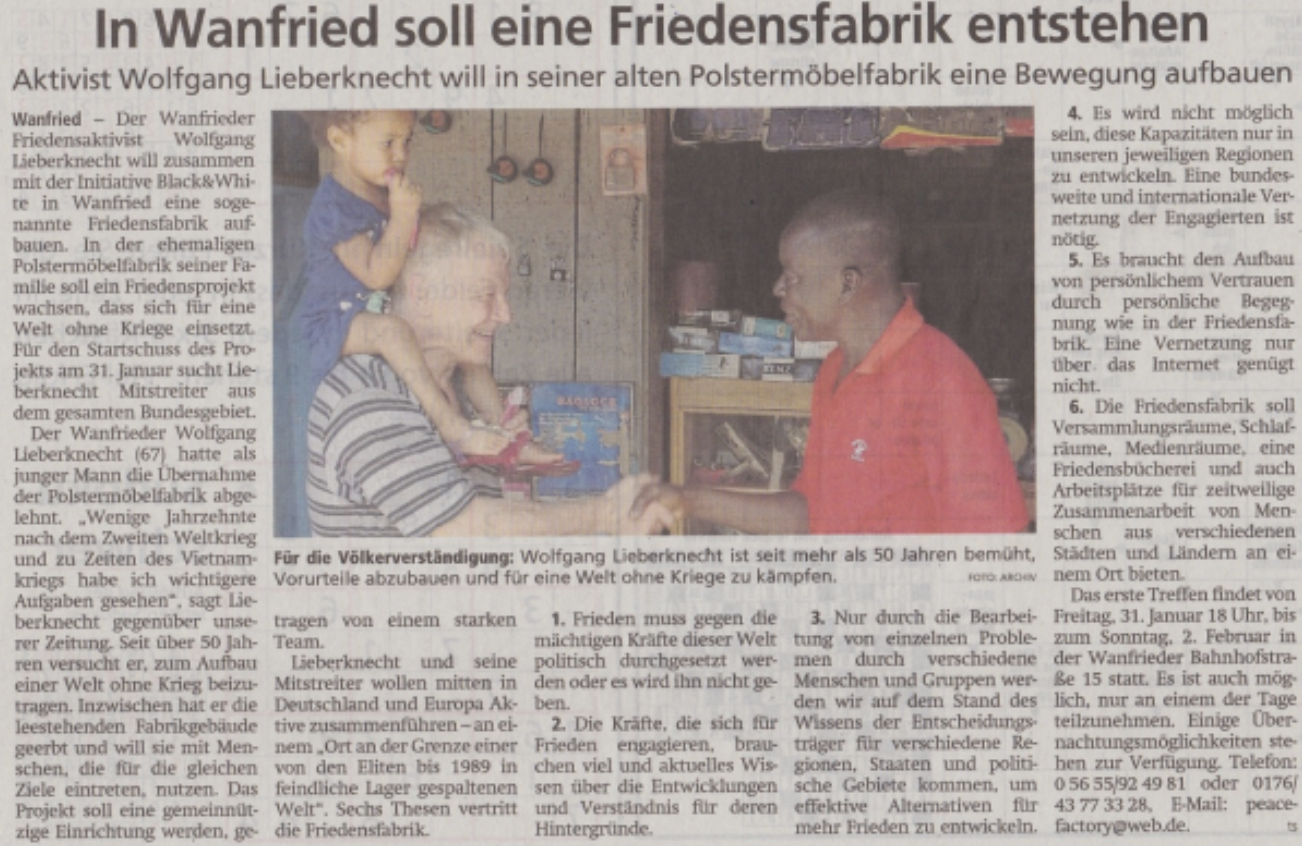 A peace factory is to be built in Wanfried

Wanfried: The Wanfried peace activist Wolfgang Lieberknecht wants to build up a so-called peace factory in Wanfried together with the initiative Black & White. In the former upholstered furniture factory of his family a peace project is to grow, which is committed to a world without wars. Lieberknecht is looking for comrades-in-arms from all over Germany to start the project on 31 January: Wolfgang Lieberknecht (67) from Wanfried refused to take over the upholstered furniture factory as a young man. “A few decades after the Second World War and during the Vietnam War I saw more important tasks,” Lieberknecht told our newspaper. For more than 50 years he has been trying to contribute to building a world without war. In the meantime he has inherited the vacant factory buildings and wants to use them with people who stand up for the same goals. Lieberknecht and his comrades-in-arms want to bring together active people in the middle of Germany and Europe – at a “place on the border of a world divided into hostile camps by the elites until 1989”. The Friedensfabrik advocates six theses.