BREAKING: On the anniversary of Yemen school bus massacre, activists in London Ontario mark the complicity of General Dynamics Land Systems and the Liberal government in war crimes against Yemeni civilians, and demand that Canada stop arming Saudi Arabia 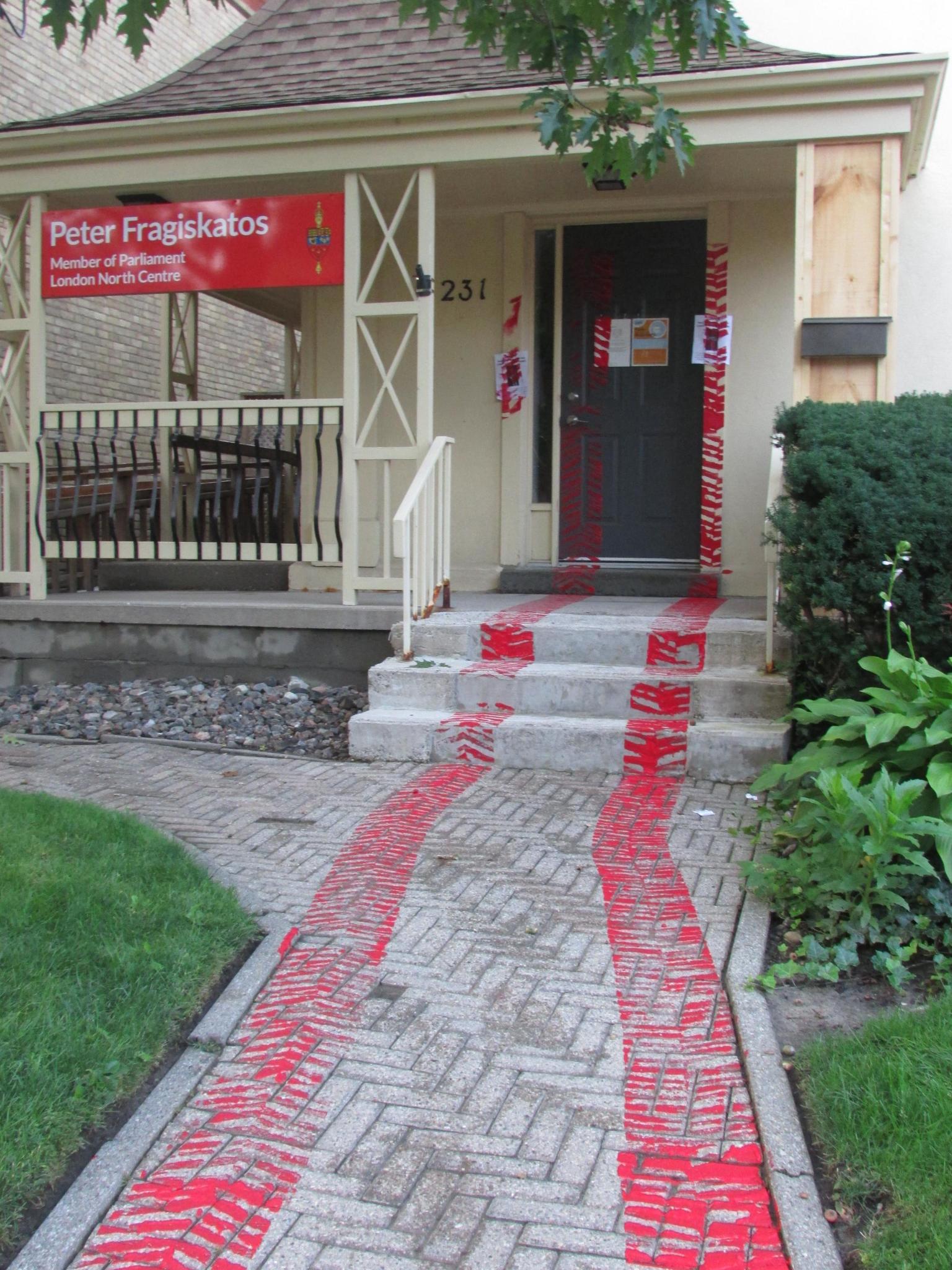 Deshkan Ziibii (London, Ontario) – Today activists left symbolic red tank tracks in front of the home of Danny Deep, President of General Dynamics Land Systems in London, as well as at the offices of Liberal MPs Peter Fragiskatos (London North Centre) and Kate Young (London West), to mark the third anniversary of the Yemen school bus massacre. The Saudi bombing of a school bus in a crowded market in northern Yemen on August 9, 2018 killed 44 children and ten adults and wounded many more. Canada supplies Light Armoured Vehicles (LAVs) and other military equipment that Saudi Arabia uses in the war on Yemen.

“Canada’s complicity with the slaughter of Yemeni civilians runs deep and wide” said Rachel Small of World BEYOND War. “Responsibility for these war crimes is shared between the GDLS corporate leadership, who profit from these lethal sales to Saudi Arabia, and the Liberal government officials who authorize these exports.”

Now in its sixth year, the Saudi-led war on Yemen has killed almost a quarter of a million people, according to the UN Office for the Coordination of Humanitarian Affairs. It has also led to what the United Nations body has called the “world’s worst humanitarian crisis.”

Peace activists are marking the anniversary of the Yemen school bus bombing across the country. In Ontario activists have protesting outside General Dynamics Land Systems-Canada, a London-area company manufacturing light armoured vehicles (LAVs) for the Kingdom of Saudi Arabia for over a year. Peace pickets are also taking place outside today at Defense Minister Harjit Sajjan’s office in Vancouver and Liberal MP Chris Bittle’s office in St. Catharines.

Last week, it was revealed that Canada approved a new deal to sell $74-million worth of explosives to Saudi Arabia in 2020. Since the beginning of the pandemic, Canada has exported over $1.2 billion worth of arms to Saudi Arabia. In 2019, Canada exported arms valued at $2.8 billion to the Kingdom—more than 77 times the dollar value of Canadian aid to Yemen in the same year. Arms exports to Saudi Arabia now account for over 75% of Canada’s non-US military exports.

“A child in Yemen will die every 75 seconds this year because of the ongoing war, according to the World Food Programme. As a parent, I can’t just stand by and allow Canada to keep profiting from this war by selling weapons to Saudi Arabia,” said Sakura Saunders, a board member of World BEYOND War. “It’s despicable that Canada continues to fuel a war that has led to the worst humanitarian crisis on the planet and heavy civilian casualties in Yemen.”

Last fall, Canada was for the first time publicly named as one of the countries helping fuel the war in Yemen by a panel of independent experts monitoring the conflict for the UN and investigating possible war crimes by the combatants, including Saudi Arabia. For Trudeau to enter an election claiming to have run a ‘feminist foreign policy’ is patently absurd given this government’s unwavering commitment to sending billions of dollars worth of weaponry to Saudia Arabia, a country infamous for its human rights record and systematic oppression of women. The Saudi arms deal is the exact opposite of a feminist approach to foreign policy.

Over 4 million people have been displaced because of the war, and 80% of the population, including 12.2 million children, are in desperate need of humanitarian assistance. This same assistance has been thwarted by the Saudi-led coalition’s land, air, and naval blockade of the country. Since 2015, this blockade has prevented food, fuel, commercial goods and aid from entering Yemen. The water-soluble red paint left in London, Ontario today will be gone with the next rain, but the very real blood, trauma and destruction inflicted on Yemeni families by the Saudi-led war will last generations.

People for Peace London and Labour Against the Arms Trade have called for conversion of war industries like the GDLS facility in London to peaceful green production in order to maintain good jobs addressing human needs rather then promoting war.

Follow twitter.com/wbwCanada, twitter.com/LAATCanada, and twitter.com/hashtag/CanadaStopArmingSaudi for photos, videos, and updates from London and across the country. 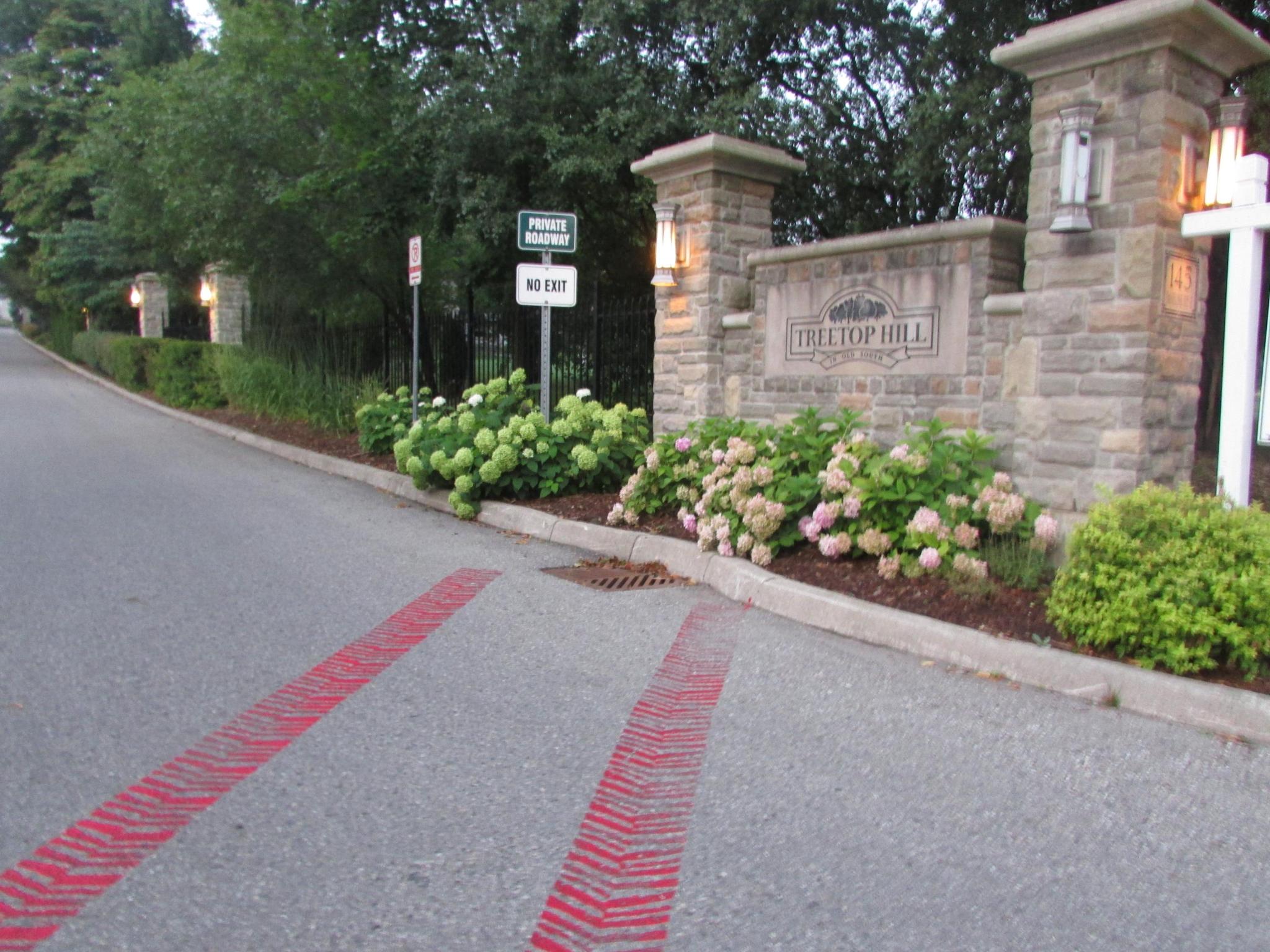 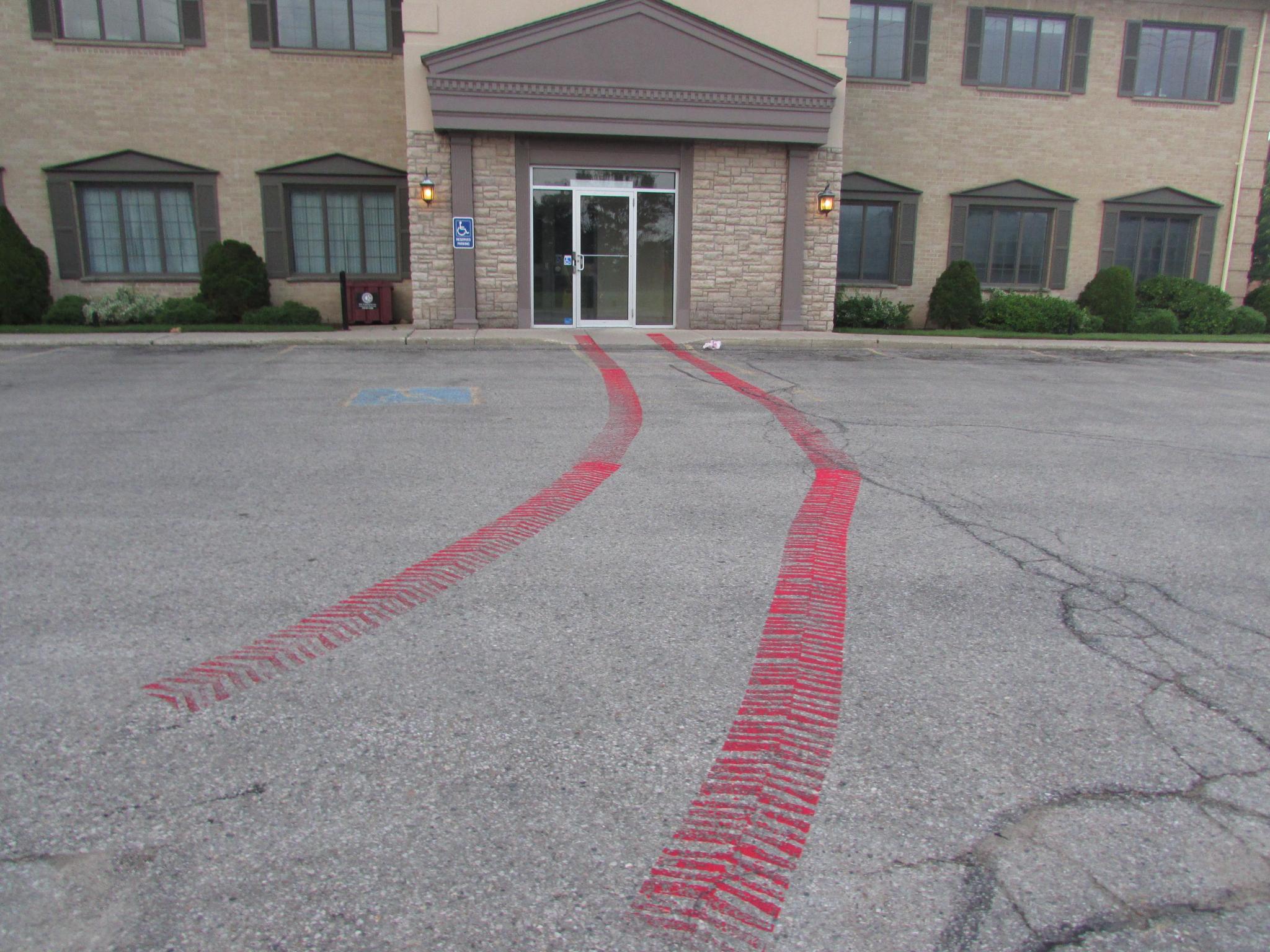 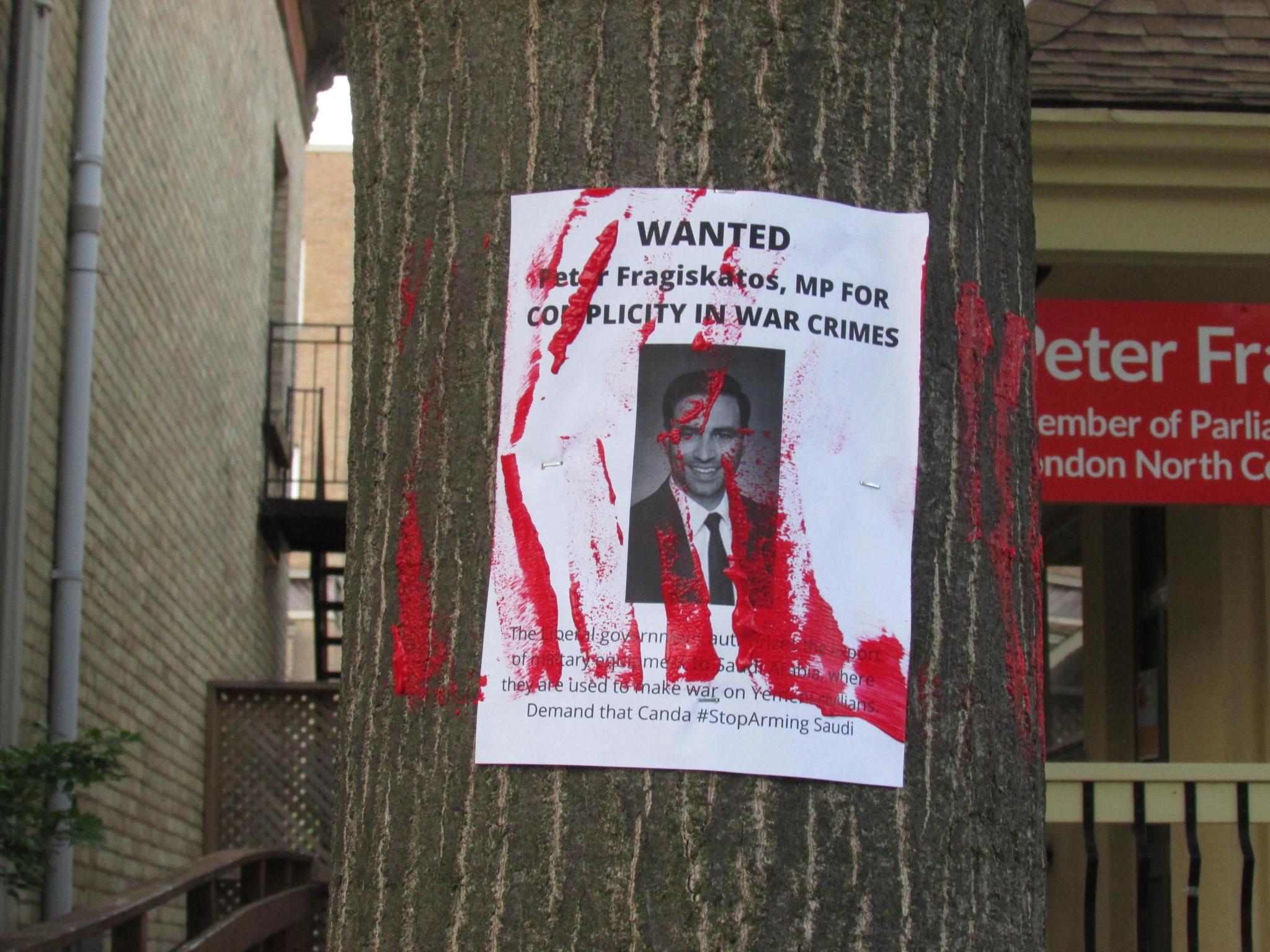 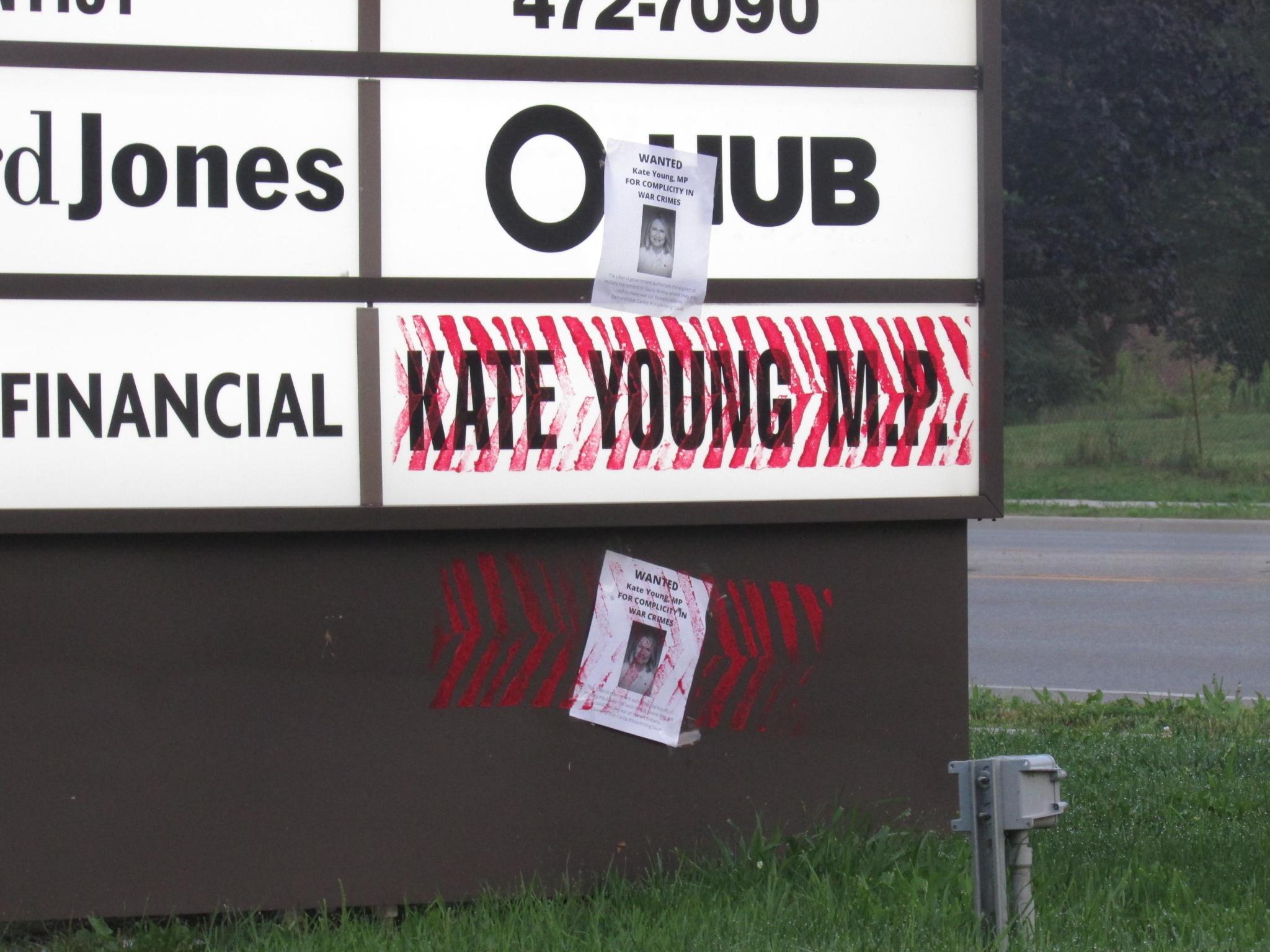 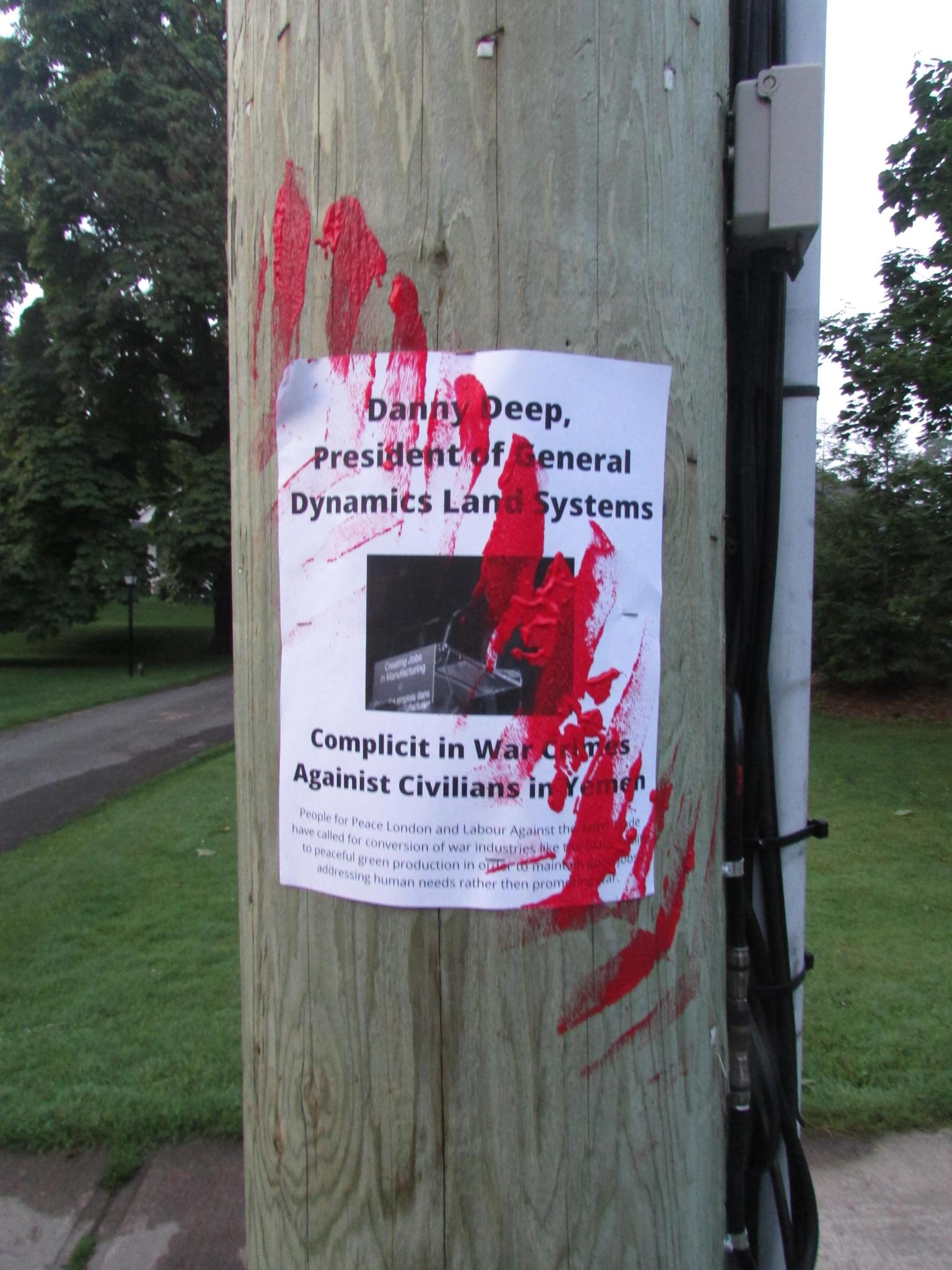