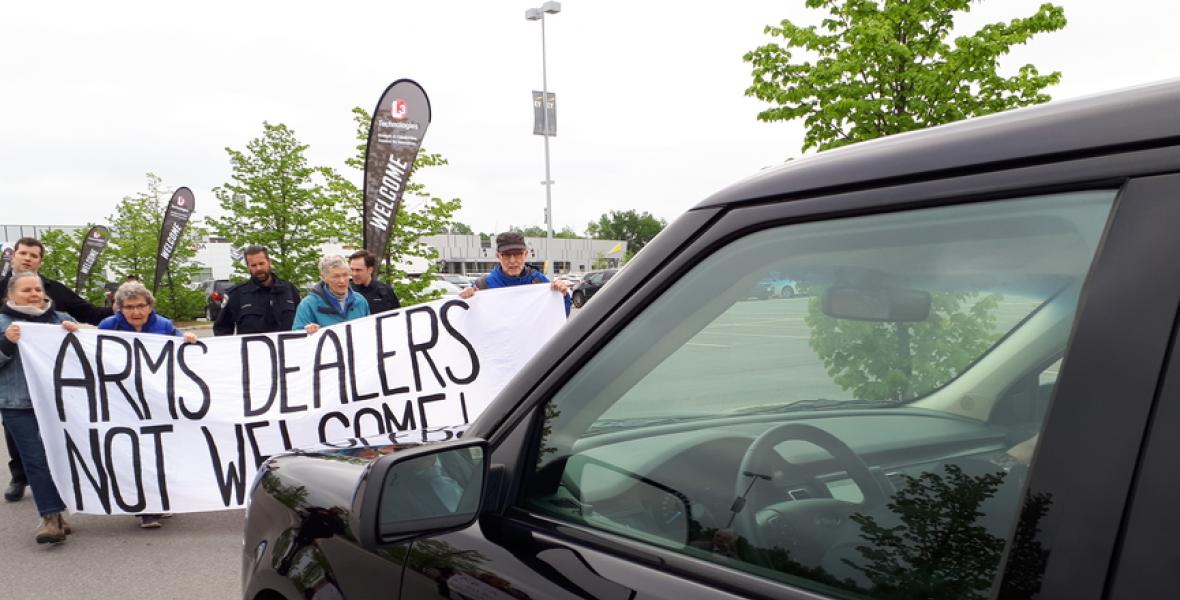 The exhibitors notably include General Dynamics Land Systems, a builder of the light armoured vehicles (LAVs) that are sold to Saudi Arabia. The London, Ontario-based company is building more than 700 LAVs for Saudi Arabia, some with 105-millimetre cannons, others with a “two-man turret” and 30-mm chain guns for “direct fire” support.

Successive governments under Harper’s Conservatives and Trudeau’s Liberals have come under fire for enabling the sale of LAVs to Saudi Arabia. The repressive Saudi government has a habit of militarily attacking its citizens and has played a defining role in Yemen’s civil war, which has seen war crimes, mass displacements and the slaughter of thousands of civilians.

The soaring costs of fighter jets

The three transnationals currently bidding for Canada’s $19 billion-plus fighter jet contract will also be there to hawk their warplanes.

Boeing will be there to promote its F/A-18 Super Hornet Block III fighter jet, Lockheed Martin its F-35 Lightning II, and Saab its Gripen-E fighter jet.

With initial proposals for the fighter jet procurement due this spring, and a decision to be made by the federal government early in 2022, the push will be on for these transnationals to connect with the cabinet ministers and Canadian Armed Forces leadership that will be present.

Last year, Saab had a full-scale model of its Gripen fighter jet at CANSEC. What will they have up their sleeves this year?

And while $19 billion is a lot of money, the fighter jets are likely to cost billions more when the annual maintenance fees, fuel and likely upgrades in the longer term are considered. Canada’s current fleet of CF-18s cost $4 billion to purchase in 1982, $2.6 billion to upgrade in 2010 and now $3.8 billion has been budgeted to extend their lifespan.

Overall, the arms sales of the world’s 100 largest arms-producing and military service companies totalled more than $398 billion in 2017.

The Canadian Association of Defence and Security Industries (CADSI), which organizes the annual CANSEC arms fair, highlights that 900 companies in Canada generate $10 billion in annual revenue, of which about 60 per cent comes from exports.

While CADSI likes to trumpet those numbers, it’s also important to note that Canada sold $5.8 billion in arms over the past 25 years to countries classified as dictatorships by the human rights group Freedom House.

Among the countries that will be present at CANSEC this year as potential arms buyers are Israel, Chile, Colombia, Turkey, the United States, Mexico, Russia and China.

Arms fairs aren’t just for browsing. CANSEC boasts that 72 per cent of the 12,000 people who will attend this year’s arms fair have “purchasing power.”

The Canadian government intends to increase its annual military spending to $32.7 billion over the next decade and to spend $70 billion on 15 new warships over the next quarter-century. Imagine a similar spending commitment for a Green New Deal.

Not only does an escalation in arms spending signal a prioritization of fighter jets over high speed trains, the carbon emissions from the military are an accelerant of climate breakdown.

The U.K.-based grassroots collective the Wretched of the Earth have stated that a “Global Green New Deal” should “include an end to the arms trade.” They add, “Wars have been created to serve the interests of corporations — the largest arms deals have delivered oil; whilst the world’s largest militaries are the biggest users of petrol.”

The Royal Geographic Society study recently noted that the U.S. military is one of the largest polluters in history, consuming 269,230 barrels of oil a day in 2017.

And who buys Canadian armaments and component systems? The United States — a country that has never gone a decade since its founding without being at war — is the largest buyer of Canadian-made armaments and technology, accounting for well over half of Canada’s military exports.

CANSEC grew out of ARMX, a Government of Canada-organized military trade show that was previously held at Lansdowne Park in the 1980s.

Peace groups regularly protested and organized against ARMX. Their efforts culminated in a rally of 3,000 people and the arrest of 140 protesters for blocking the Lansdowne entrance in 1989. That same year, then-mayor Marion Dewar and city council passed a resolution that prohibited ARMX from municipal properties, including Lansdowne Park.

In 2008, Ottawa city council under then-mayor Larry O’Brien cancelled the ban on arms exhibitions on municipal property, citing a legal technicality about the ownership of Lansdowne Park and Canadians’ need to “do everything they can to support our military personnel and the businesses or organizations they rely upon for their own safety and security.”

CANSEC now takes place at the EY Centre, which is located near the Ottawa International Airport. That said, in his CANSEC 2020 welcoming message, Mayor Jim Watson invited those attending the arms fair to visit the “revitalized” Lansdowne Park.

Just over 30 years ago, hundreds were arrested for blockading the ARMX weapons show at Lansdowne Park.

Hundreds will be mobilizing again this year in an effort to cancel CANSEC during the NoWar2020: Divest, Disarm, Demilitarize conference (May 26-31). Details are available on the World Beyond War website.

This will be an important opportunity to mobilize against the agenda of profiting from war and to call for a conversion towards a peaceful, green and just future.

Brent Patterson is an activist, writer and one of the organizers of the #NoWar2020 conference and protest. This article originally appeared in The Leveller.