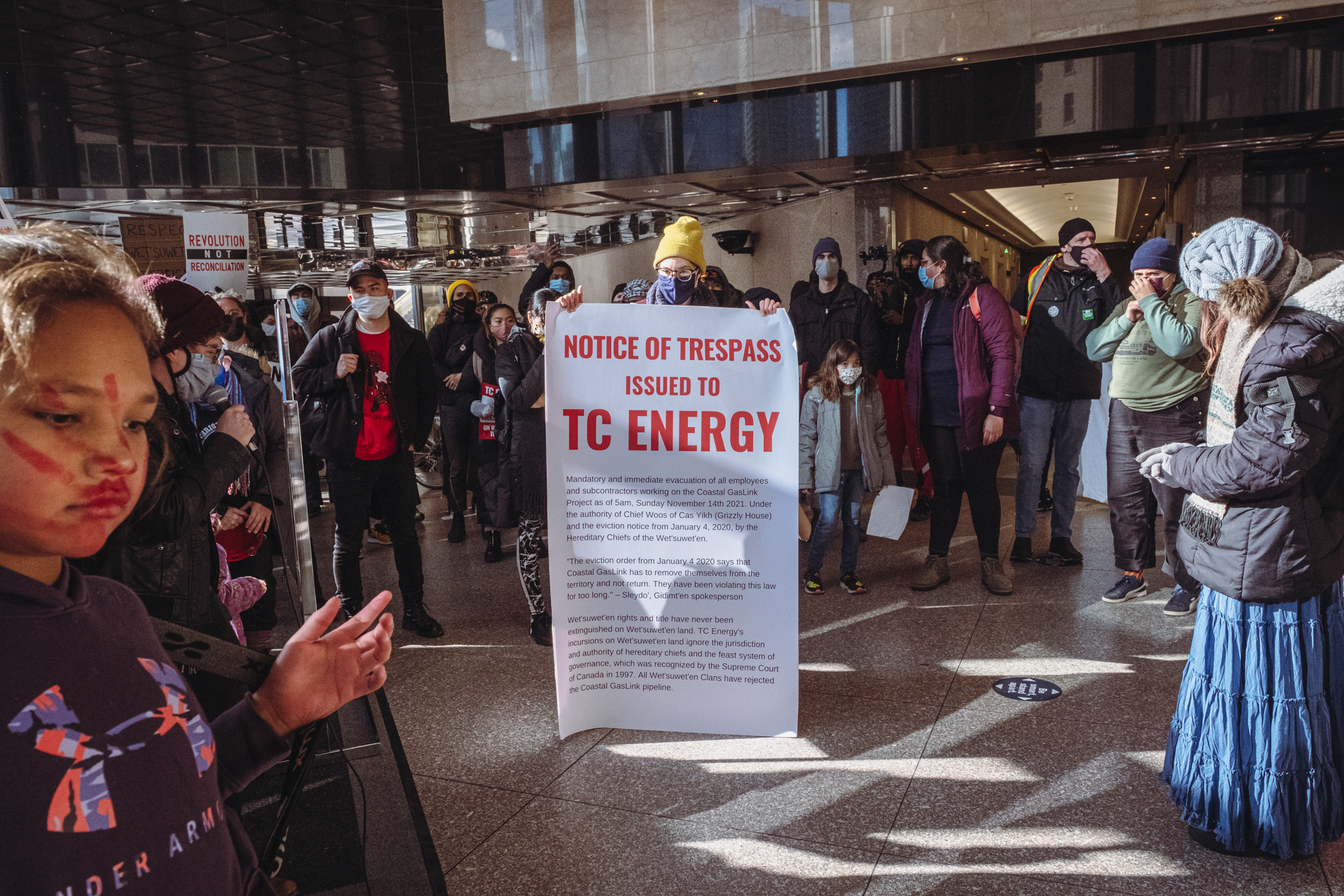 Toronto, Ontario — Hundreds of people entered the lobby of the building where TC Energy Corporation’s office is located, pasting up oversize ‘trespass notices’ for their attempt to force through the Coastal GasLink pipeline on unsurrendered unceded Wet’suwet’en Indigenous territory. Indigenous community members and supporters took over the lobby with drumming and dancing.

“We have to do everything we can to protect this.” Watch this powerful video from Friday’s action in Toronto when we shut down TC Energy’s office at the same time @Gidimten was facing down a militarized raid. Read more: https://t.co/pYv42mkKEu#AllOutForWedzinKwa #ShutDownCanada pic.twitter.com/Pe1MPJ25xI

“It’s time to put pressure on Coastal Gaslink’s Investors to divest from genocide, human rights violations and climate chaos. They would rather send RCMP to protect a pipeline than save human lives in a disastrous flood.” said Eve Saint, Wet’suwet’en Land Defender. 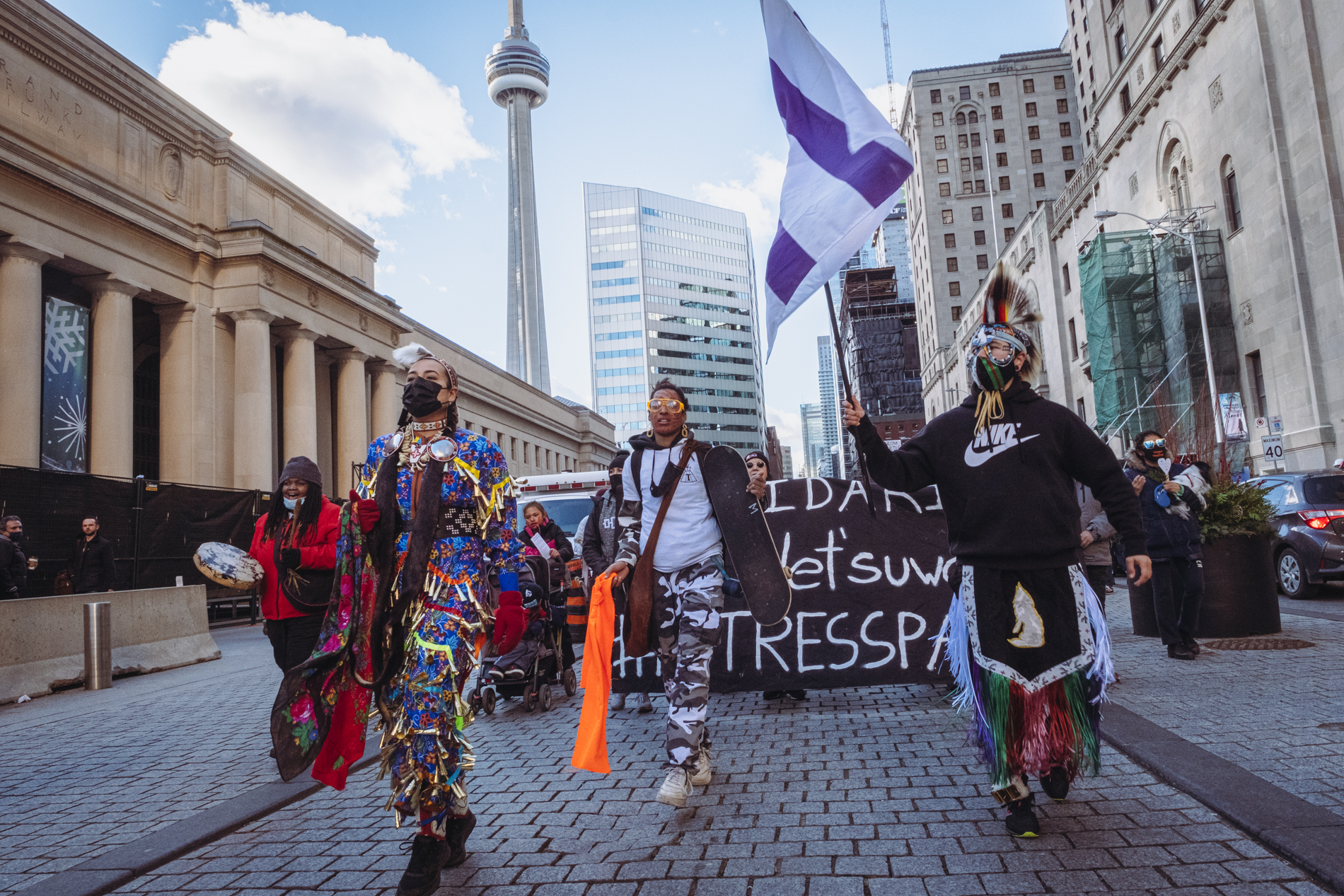 TC Energy is accountable for the construction of Coastal GasLink, a $6.6-billion dollar 670 km pipeline that would transport fracked gas in northeastern B.C. to a $40 billion LNG terminal on B.C.’s North Coast. Coastal GasLink’s pipeline development has moved forward in unceded Wet’suwet’en territory without the consent of Wet’suwet’en Hereditary Chiefs.

On Sunday November 14th, Cas Yikh enforced their eviction to Coastal GasLink that was originally issued January 4, 2020. Coastal GasLink was given 8 hours to evacuate, to remove all pipeline workers trespassing on their territory, before Wet’suwet’en Land Defenders and supporters blocked the road, effectively stopping all work within Cas Yikh territory. Under ‘Anuc niwh’it’en (Wet’suwet’en law) all five clans of the Wet’suwet’en have unanimously opposed all pipeline proposals and have not provided free, prior, and informed consent to Coastal Gaslink/TC Energy to do work on Wet’suwet’en lands. 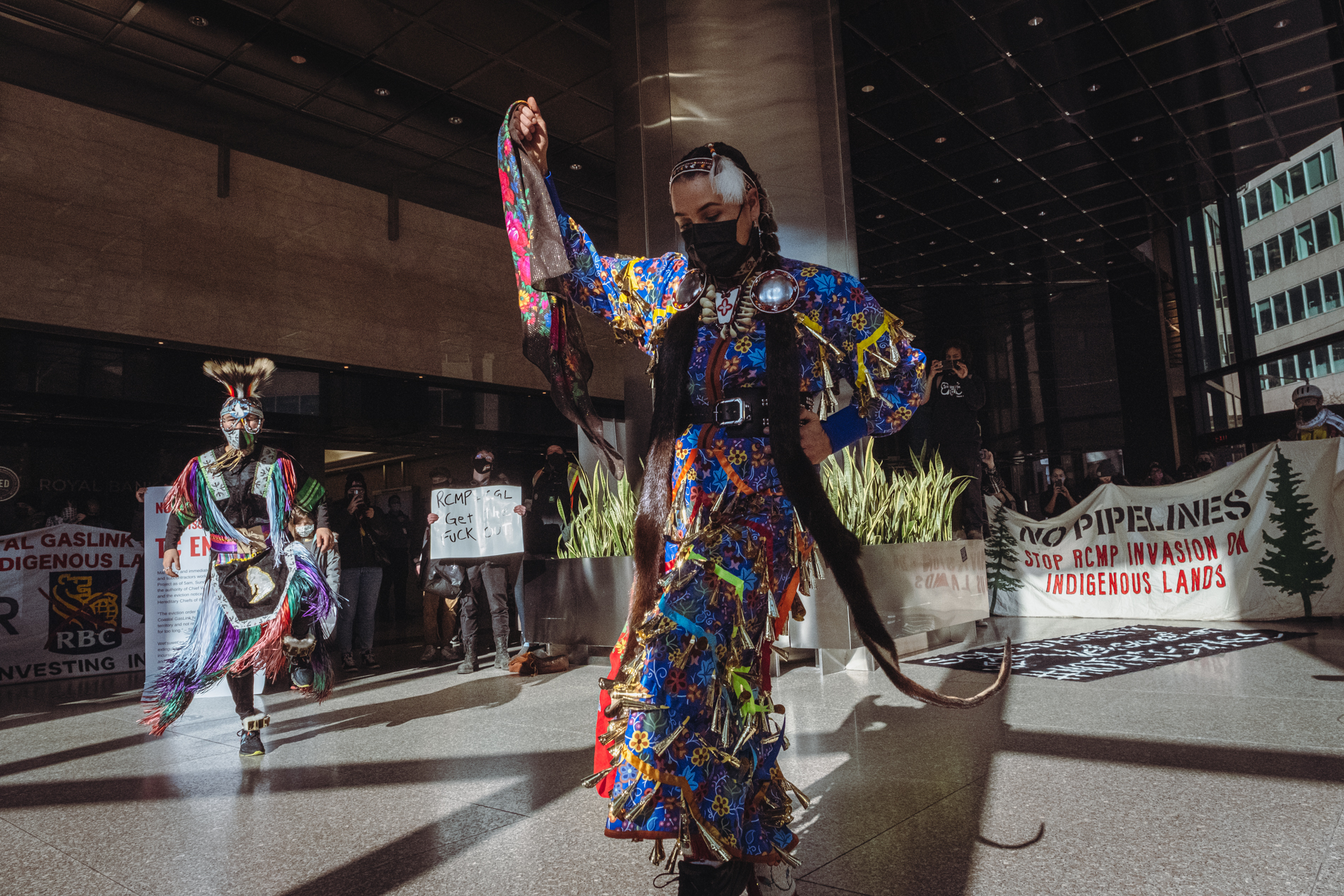 “This invasion once again speaks to the genocide that’s happening to Indigenous people that are trying to protect our water for future generations,” said Sleydo’, Gidimt’en spokesperson in a video statement recorded on Thursday night from Coyote Camp, on CGL’s drilling pad. Sleydo’ and supporters have occupied the site for over 50 days to prevent the pipeline from being able to drill under their sacred river, Wedzin Kwa. “It’s infuriating, it’s illegal, even according to their own means of colonial law. We need to shut down Canada.”

UPDATE FROM COYOTE CAMP INVASION 2021
15 supporters have been arrested, all for breaches of the injunction. No criminal charges. They will be brought to Smithers for bail hearings tomorrow. pic.twitter.com/4vw5dOABhn

One of North America’s largest natural gas, oil and power infrastructure companies, TC Energy owns more than 92,600 km of natural gas pipeline in North America and transports more than 25% of the gas consumed on the continent. TC Energy is known for their destructive environmental and human rights abuses, including bulldozing an ancient Wet’suwet’en village site in September 2021, and other violent behaviours supported by RCMP. In January 2020, RCMP deployed helicopters, snipers, and police dogs to remove Wet’suwet’en hereditary chiefs and community members from their land in a violent military raid that cost $20 million CAD.

The eviction order from January 4 2020 says that Coastal GasLink has to remove themselves from the territory and not return. “They have been violating this law for too long”, says Sleydo’, Gidimt’en spokesperson. TC Energy’s incursions on Wet’suwet’en land ignore the jurisdiction and authority of hereditary chiefs and the feast system of governance, which was recognized by the Supreme Court of Canada in 1997.

“We’re here to stand up to the colonial violence we are witnessing in real-time on Wet’suwet’en territory,” explained World BEYOND War organizer Rachel Small. “TC Energy and RCMP are trying to push through a pipeline at gunpoint, they are executing an illegal invasion of territory over which they have no jurisdiction.” 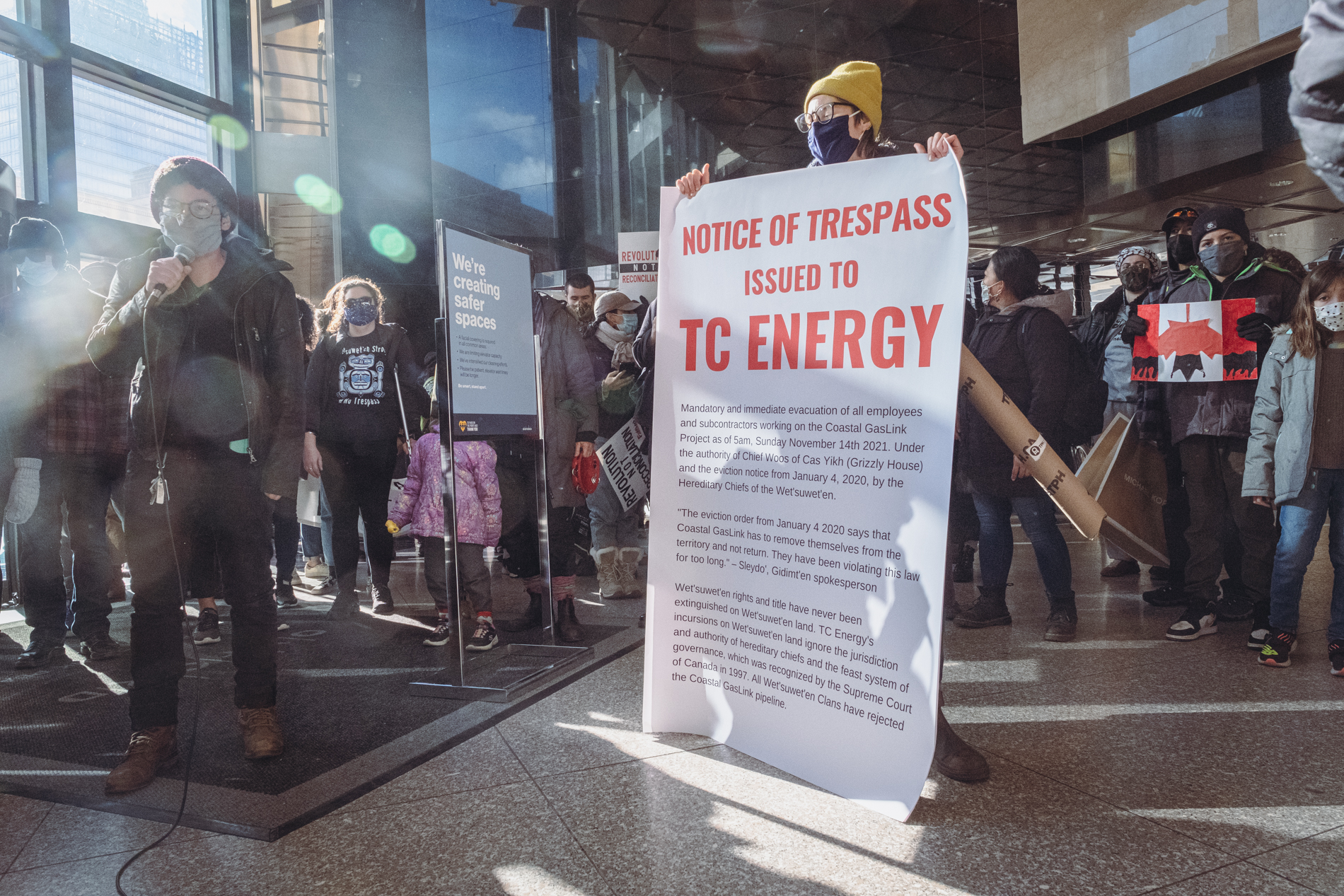 World BEYOND War organizer Rachel Small addresses the crowd in the lobby of the building where TC Energy’s Toronto office is. Photo by Joshua Best. 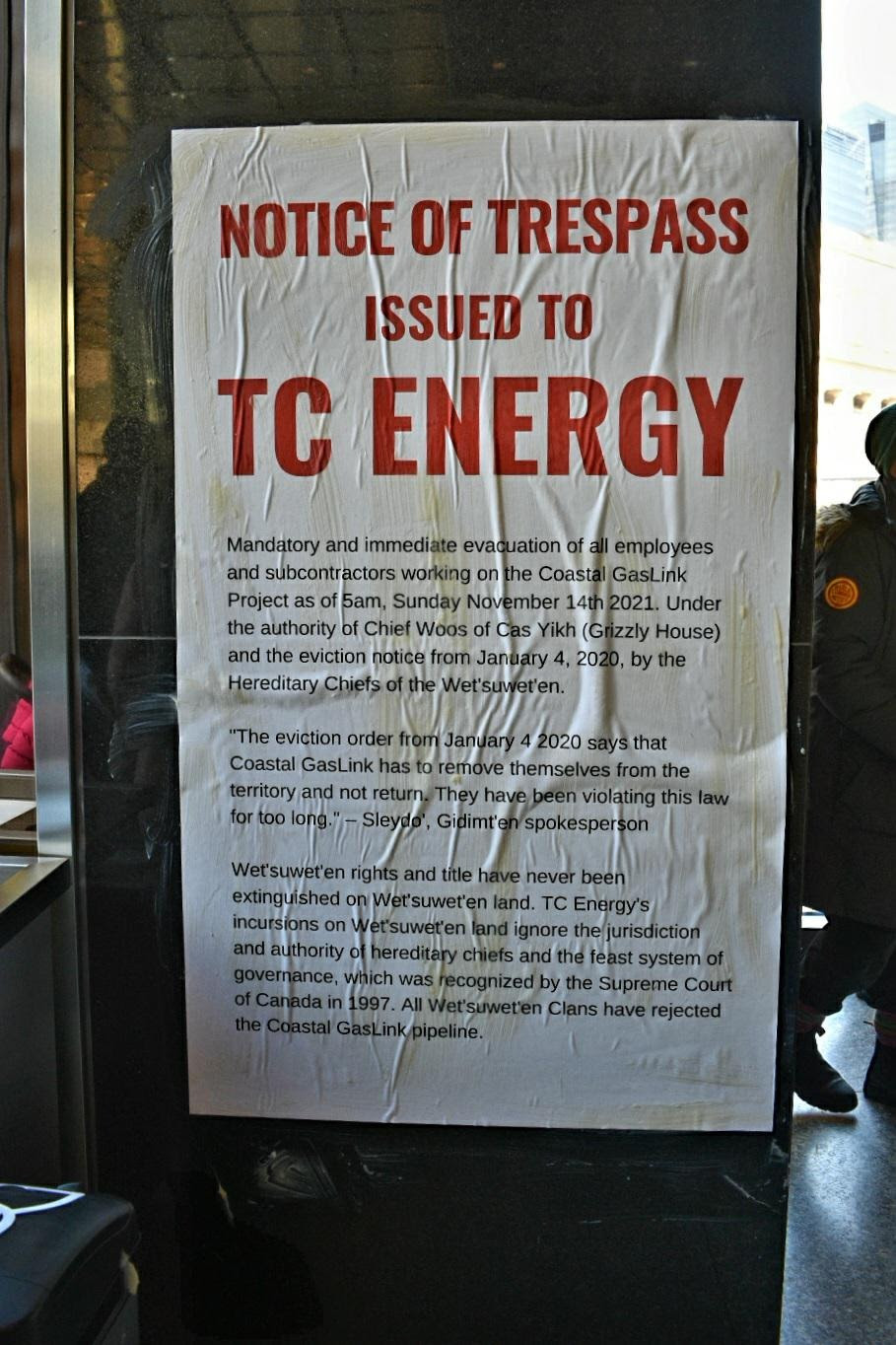 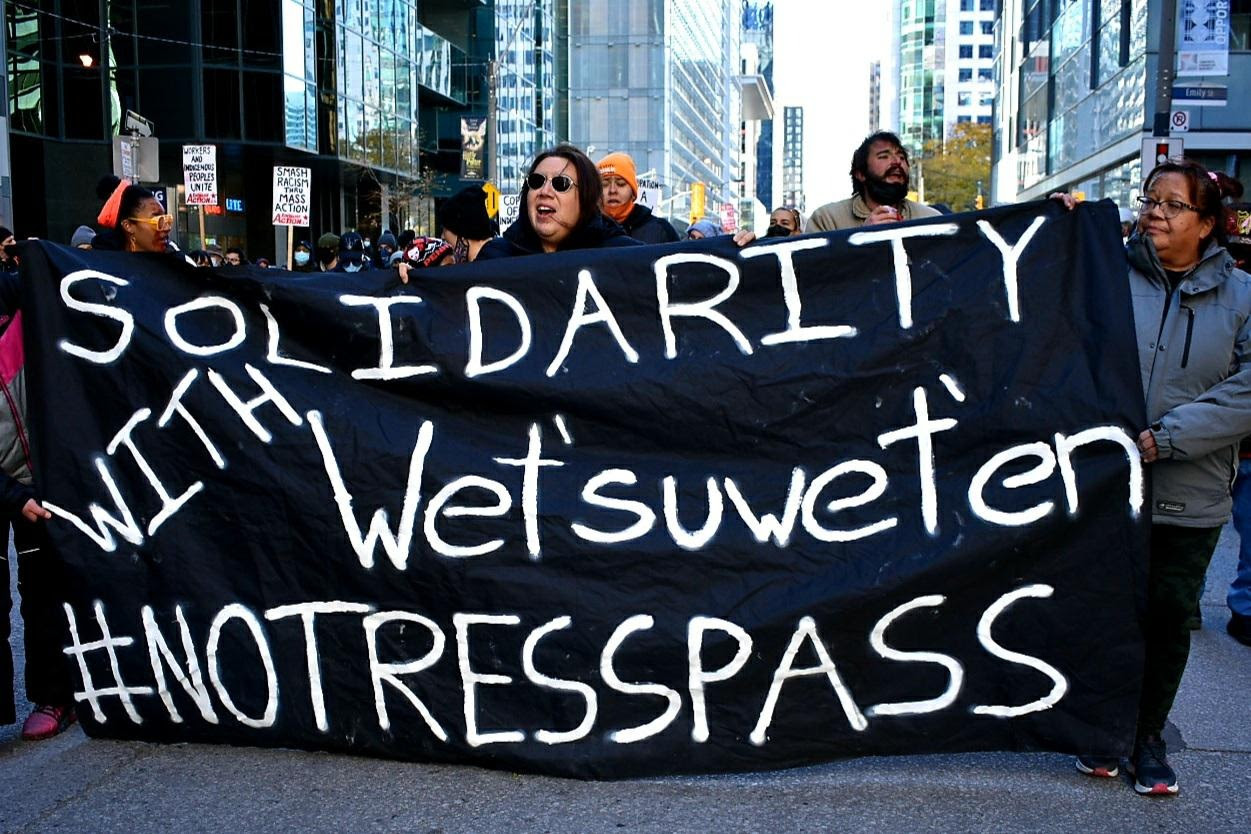 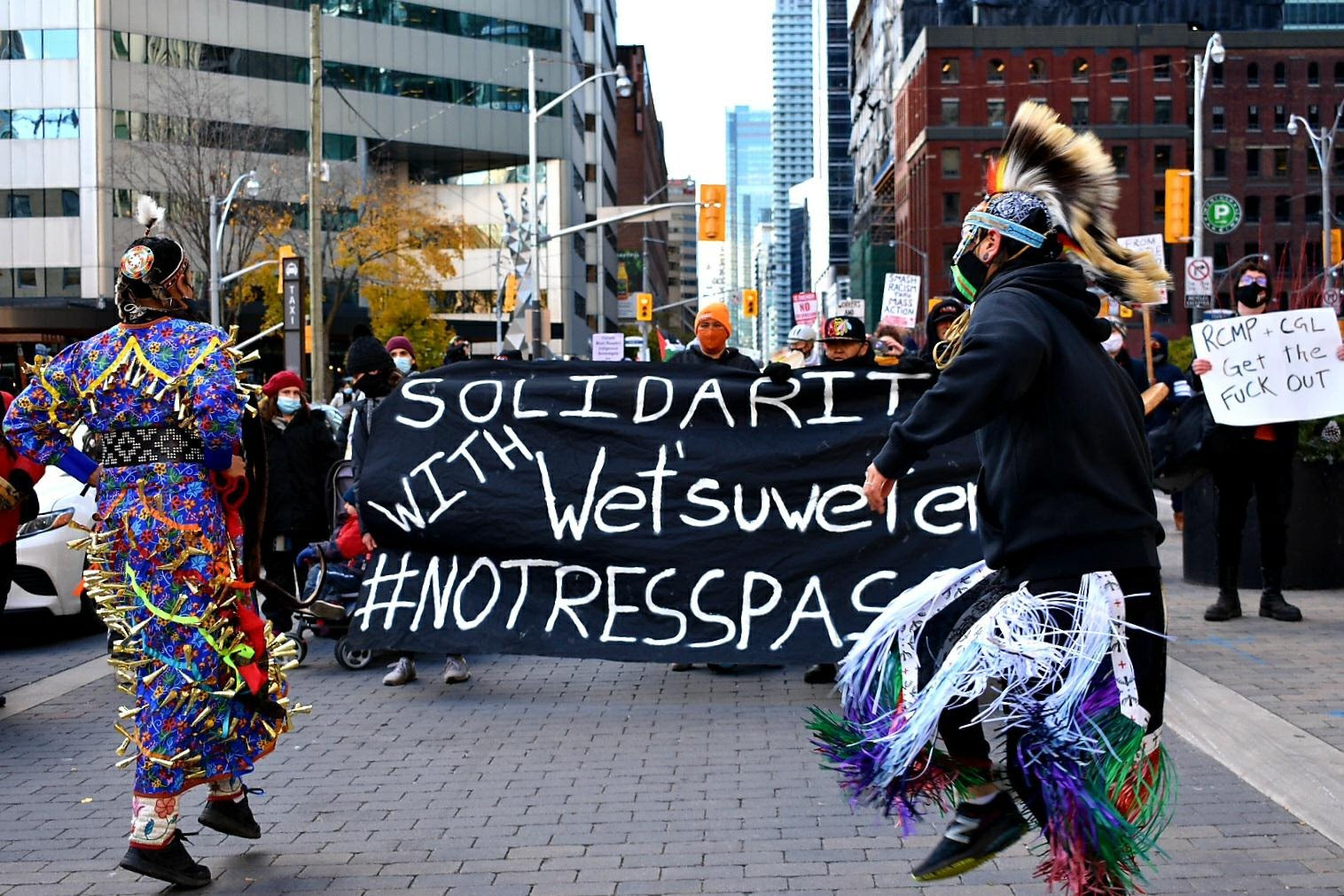 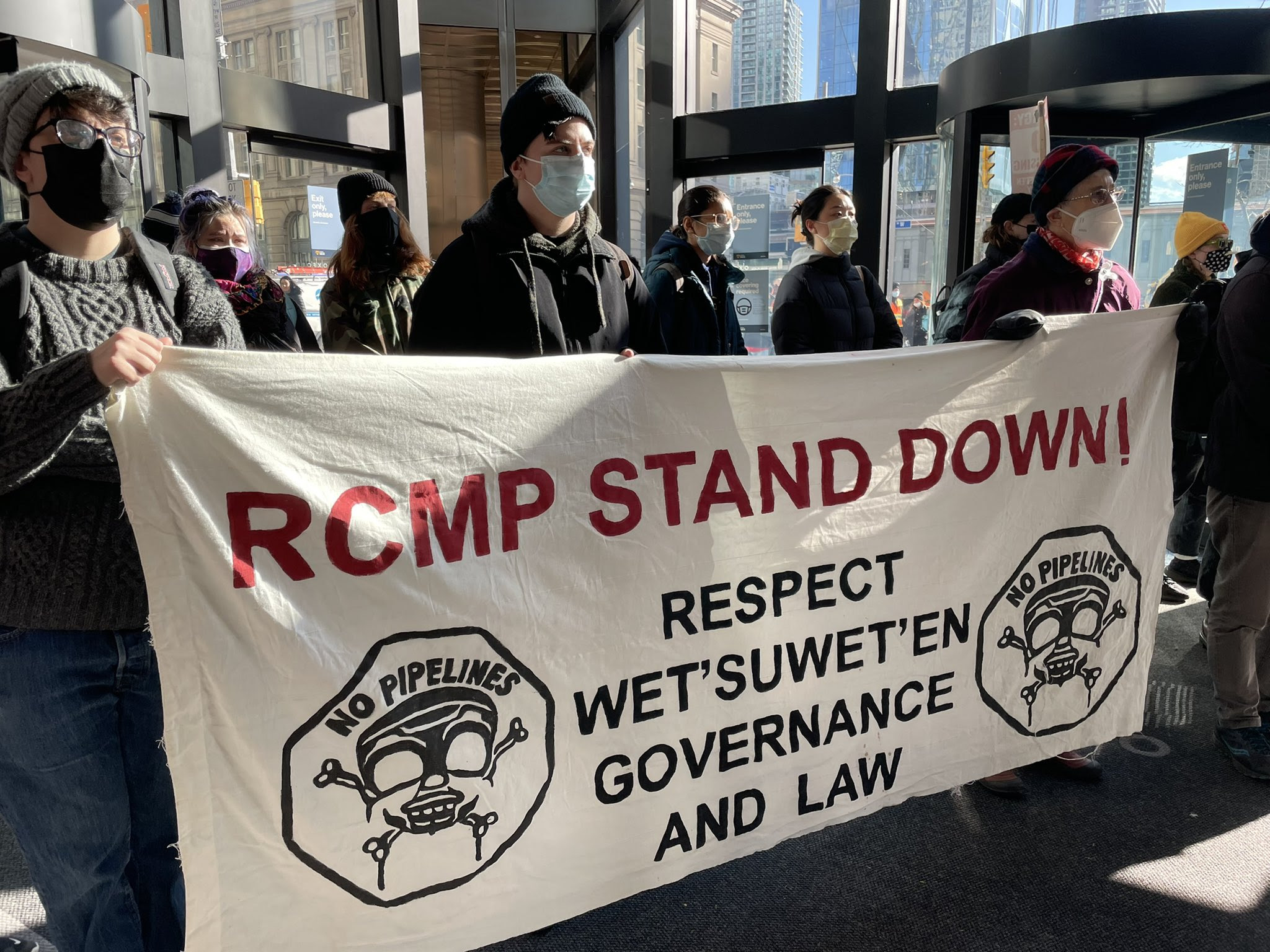